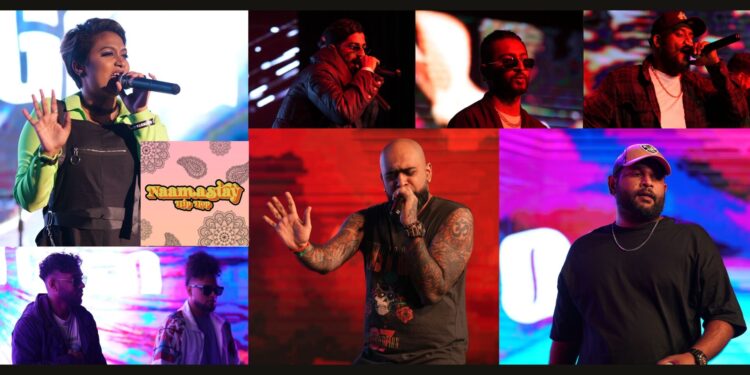 A night which served all hip hop music enthusiasts with a thrilling atmosphere and surprises.

Spearheaded by the fabulous team, FourOne6‘s latest concert Naamastay Hip Hop! was held over the weekend at The Bee, Publika. Their very first hip-hop concert this year was absolutely a huge banger.

Around 4pm, the long snake-like line could be seen waiting outside the hall for their entry bands and within 1 hour the crowd had gotten bigger. DJ Drazzy and DJ Renan entertained the excited crowd awaiting the performances of the main act to start.

After a slight delay, not by hours…(phew thankfully), at 5.25pm sharp, a promo of Naamastay Hip Hop! was displayed indicating the start of the gig which immediately garnered the attention of the audience. Now what? The entry of the official host and DJ. The host for the night Hindra Bose who is also fondly known as MamaJammaPuma kick started the show with his standup comedy which pulls the audience together. For almost 5 hours, the comedian hosted the show with full of energy and enthusiasm with his gift of wit and stand-up presence. The official DJ of the night, DJ Nexto pumped up the beat and immediately got the crowd engaged with his beats. Thanks to our homies for brimming the stage with full-on-full oomph.

The artist lineup who performed at this live gig literally rocked the stage with their energy-banger tracks and unexpected surprises and collaboration.

The Bee, Publika a neighbourhood which I’m pretty sure most of you all are fond of was easily accessible for parking and drop off point. The clear signage in front of the venue made it easy for attendees to swap their e-tickets for wristbands and to purchase the tickets, which was on the whole, a seamless process.

The concert space was quite confined, we were packed like a can of sardines after a couple of hours into the show, but that did not deter the audience from having a good time. The crew did a great job by managing the space well, eventually leaving a massive space allowing the crowd to witness the live gig.

[Act 1] Rap Porkalam primo supremo CJL who leaped out as the first performer had truly set the vibes at the concert. It really required some grit to take upon the stage first but CJL nailed it. He came in with his first single Lepak Mamak, followed by his latest track Thikki Thikki, this got the audience grooving to the beat and singing to the chorus. Everyone went on the Thikki Thikki mode.

[Act 2] Following that, Mista Carey barged in with his OG track fav of many as well as mine, Inni Vendham and the highlight was when our lil’ bomb Tharagai rocked the stage with her presence with Aiyoo Gopal along with Mista Carey, the next we could hear throughout the hall was ‘Aiyoo Gopal’. This Rap Porkalam Season 1 sensational lass surprised her fans by unveiling a track named ‘Maarani’. The piece was DOPE. Just about the audience thought Tharagai’s act was over…dang, The Ryderz of Pridemachi Entertainment, DarCiva and Govindan Sankar slayed the stage.

[Act 3] Next, we had Aakaash aka Axiz amazed everyone by spitting lines at a wickedly fast pace effortlessly. Even though the showtime for Axiz seems to be little compared to others, it is commendable that he has done a pretty good job delivering his part wholly without lag.

[Act 4] As the hit riled up, the entry of Enge Port fame our homie Arunboii, witnessed the audience in awe with his eccentric rap style. What can we expect from this artist other than a great performance? I could really feel the chills up my spine while he was performing on stage.

[Act 5] Triple the cheer from the crowd when The INC trio made the appearance, these guys literally got us grooving. Donned in black attire, these three lads set a strong tone with their appealing rap, and that eventually made the crowd go crazy.

[Act 6] During an exclusive interview with Varnam MY, rap maniac Yunohoo said ‘expect the unexpected’ and yes this sassy lady served that word right with musically and visually compelling hip-hop songs. Before she started her performance, Santhosh Logandran, our Malaysian Indie gem gave an intro with his mesmerising vocals in the company of an acoustic guitar. Yunohoo joined him in performing their hit track Rani. Yunohoo slayed the night as the lady ninja slaughtered the stage with her razor-sharp verse along with captivating dance moves with amazing backup dancers. It was a feast for both the eyes and ears.

[Act 7] The OG duo Psychomantra and Craankstar conquered the crowd’s attention as soon they stepped on it. Besides the fact that they started off their performance a bit late, however, the songs they picked kinda tallied with the atmosphere. The highlight of this duo’s performance was that they made the crowd go crazy with their signature SambaRap, who can resist this dapang kuthu track!

[Act 8] This duo from Music Kitchen did not fail to make the crowd go crazy. These chefs sizzled some hot tracks on the decks that truly brought the party vibe together with their catchy trap tracks. The stage went pitch dark for a few seconds before a dramatic countdown started hyping the crowd. The lights rose, the beat dropped, next we witnessed sudden energy coming from the crowd. It was just an appetiser. This duo later joined hands with the most anticipated act, Arvind Raj. This KL dude was having the time of his life, with a great collaboration on stage and overwhelming crowd support. The highlight of his act, in my opinion, was when he started performing Nandu Kathey, everything was just pure perfection.

[Act 9] Hmm…Mr Sheezay. He made everyone shake for a second. The audience in attendance will know what I mean by this. (hehe) Well, that was a one of a kind surprise entry we witnessed throughout the event. Sheezay delivered some of his greatest hits, notably Kannama, which was a show-stopper.

[Special Act] Another special appearance that everyone witnessed was Amos Paul, He was invited to the centre of the stage to give a glimpse of his new upcoming single, damn…the hook that he sang was so addictive which resulted in the crowd singing along with him while everyone was swaying their flashlights on and hands up in the air. (Amos Paul effect)

Last but not least, Naamastay Hip Hop wrapped up with their very own Naamastay Cypher 1 track, but it seemed like not everyone was on the stage during the performance. Nevertheless, the artists performing the final act, were incredible for carrying the same level of energy all the way to the end of the concert. It was a good closure.

The 5-hour live show organised by FourOne6 was truly AMAZING! Kudos to the entire crew for all of their efforts leading up to the event to the end. We are excited to see what they have in store for the forthcoming days.