Mozart of Madras A R Rahman turns 52 today. One of India’s largest music icons, Rahman has been serving up music internationally for almost 3 decades.

In conjunction with his birthday, Rahman has shared a video on Twitter which features an acapella medley of his songs. Sung by One Note Stand, this tune is a mash up of all the songs from Rhythm, a film starring Arjun and Meena from the year 2000. 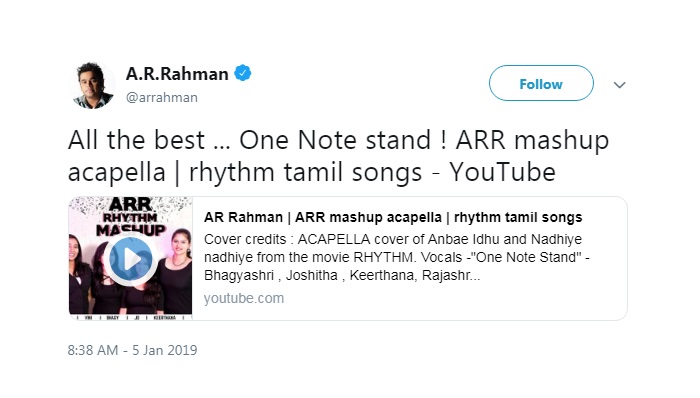 Many might remember Rhythm not for its story, but for Rahman’s music which took the viewer on a journey through the five elements of nature. Nadhiye Nadhiye sung by Unni Menon flowed into our hearts like water, Kaatre En Vasal was unforgettable with Jyothika enjoying the wind in a dessert. Sadhana Sargam’s melodious Anbae Idhu was an ode to the sky, and Aiyo Pathikichu was Vasundhara Das’ tribute to fire. Taniye Tananthaniye was probably the most memorable song as popular singer Shankar Mahadevan made an appearance on screen, and even whipped out a few dance moves to the tune that talks about earth.

One Note Stand have done a fantastic job melding the five tunes together and delivering it to us in a beautifully packaged video with nothing but their voices. Happy birthday, ARR!