Perhaps you can be inspired by their success and start your own hustle? 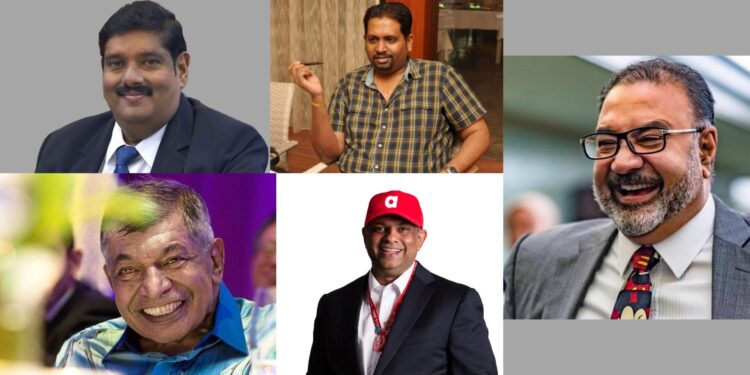 The term Malaysian Indian refers to a Malaysian population comprising of Tamil, Malayalam, Telugu and Punjabi descent originating from India and Sri Lanka. They make up 70% of the population of Indian descent in Malaysia. Most of the migration took place during the British occupation. This has created an Indian  society in this part of the world.

The Indians make up third of the population after the Malays and Chinese in Malaysia right now. Malaysian Indians have come a long way since and have made a name for themselves in nation-building and economic development.

Let’s take a look at some of the well-known Malaysian Indian Brands and their founders.

The initiator of this group, Renah Doraisingam Pillai is an energetic individual who picked up much of his profitable involvement and commerce insight from his late father Philanthropist N. Rengasamy Pillai.

He started a fishing business with money earned from savings he acquired selling coconuts. In 1987, he migrated to Kuala Lumpur and opened Lotus Family Restaurant in Jalan Masjid India.

Since then, he has opened 18 branches around the Klang Valley and Ipoh. Being far sighted, he expanded his business empire into real estate, hotels, film distribution, information technology and food distribution.

To succeed like Tan Sri Datuk R. Doraisingam Pillai requires a lot of effort and determination. Although he might not be academically inclined, he has proven that it is not a barrier to being successful.

Lowyat.net is a popular Internet forum website and technology magazine in Malaysia. Vijandren Ramadass is a Malaysian Indian. He holds a degree in computer science from Universiti Teknologi Malaysia, Skudai.

Vijandren founded Lowyat.NET in 2002 as a simple one-page website to publish price lists of the latest computers and gadgets from the Plaza Low Yat digital shopping mall in Kuala Lumpur. In 2011, Lowyat Networks gained MSC status and expanded its portfolio with the launch of Lipstiq.com, a women’s lifestyle portal.

Apart from that, he also serves as the CEO of Lowyat Commerce Sdn Bhd, Lowyat Digital Sdn Bhd, and Lowyat MSC Sdn Bhd.

Tan Sri G. Gnanalingam or better known as Tan Sri G did not come from a wealthy family. He managed to become a Director of Marketing at the age of 34.

The golden opportunity came in its place when the government at the time had planned to build another port after Port Klang to compete with the port of Singapore. Tan Sri G who was a member of the board of directors of the Port Klang Authority was asked to help. Tan Sri G presented 25 proposals to the cabinet and WESTPORTS proposal was accepted.

Finally, in just nine months, WESTPORTS was successfully built and Tan Sri G and his staff worked day and night to ensure the success of the company. In 2011, WESTPORTS set a record when it managed to unload 734 containers in ONE HOUR using nine cranes!

And after three years, Tan Sri G’s WESTPORTS was successfully listed on Bursa Malaysia at RM2.50 per share by winning an IPO of RM2.2 billion, thus increasing its market capitalisation to RM8.53 billion. The success of this listing makes him a daily BILLIONAIRE!

Tony Fernandes is an entrepreneur from Malaysia and the founder of “Tune Air Sdn Bhd” which introduced low-cost flights to Malaysians and regional countries. On 8th June, 2004, the airline became a public listed company under the name AIR ASIA BERHAD. The slogan “Now Everyone Can Fly” is in line with AirAsia Berhad’s market segment which focuses on low to middle-income consumers.

The Petra Group, through its backups, gives budgetary and administration back for early organised innovation businesses. It locks in inquiring about and commercialising within the field of biophotonics for applications in agrarian, restorative, nourishment innovation, green innovation, communication, amusement occasions, organising preparations, and financials.

The company is based in Kuala Lumpur with operations around the globe. The Petra Group works as an auxiliary of The Sekhar Foundation. Vinod B. Sekhar established Green Rubber in 2001 and afterward the Petra Group and serves as its Chairman and Group Chief Official and President.

He is associated with the Standard Malaysian Rubber Scheme used worldwide among producers and consumers of natural rubber and has received numerous accolades and awards for his work over the years. He is also known for his philanthropical work.

That’s all for now.

Many more Malaysian Indians who have also ‘made it’ will be featured in the near future on Varnam.my.