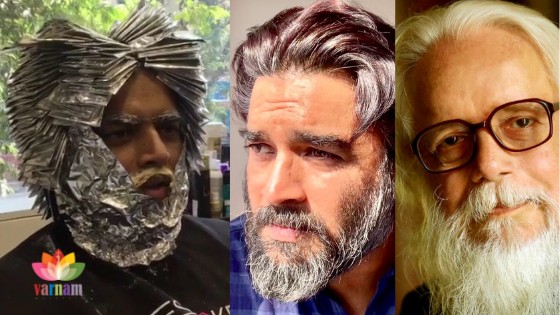 What does it take to play a space scientist falsely accused of being a spy who, consequently, had to endure 24 years of humiliation, defamation and police brutality, before finally winning over the case with ₹50 lakh in compensation?

For starters, a great actor.

Next, a great actor with lots of patience to sit through the long hours at a hair salon with his head and face wrapped in aluminium foil, like this guy!

Believe it or not, it is our beloved actor Madhavan who is wrapped in foil to colour his hair, beard, moustache and eyebrows in preparation to play the role of Nambi Narayanan in the movie Rocketry: The Nambi Effect. In October 2018, the biographical film of Nambi Narayanan was announced and is scheduled to be released in mid 2019. The film is directed by Madhavan himself and Anant Mahadevan.

We can’t wait to see the turmoils of a false accusation and the tumultuous rise of a man who stood by his truth for a quarter of a century.