Anyone who was worried that musical genius, Yuvan Shankar Raja would opt for a muted celebration, just like his low-profile personality, felt their fears dissipate.

In a triumphant weekend for Yuvan -25 Live In KL , we must say that Day 2, Rowdy Baby Night was indeed a PARTY VIBE spectacle for all concert-goers!

The opening act for Day 2 featured an epic Malaysian HOMEGROWN artists on an emotionally charged and energetic ride featuring their most iconic tracks, matched with a hefty selection of songs from their album tracks.

With the audience still trickling into the sold-out arena, the concert kicked off with Buggiman and Psychomantra’s ultimate performance. From singing the unplugged version of Manmadhan Nee rendition to Pyschomantra’s high octane tracks, phewww the duo had set the stage on fire for the opening act.

The man who stole the entire show on Day 1 made a SPECIAL APPEARANCE once again on Day 2!

We all know that Buggiman and Psychomantra are perfectly capable of putting on a spectacular show. But when the concert-goers saw Darkey busts out crazed dance movements to perform his hit song , it was next level!

Dhilip Varman; A household name that requires no introduction

With numerous accolades and a voice that makes every soul ache, Dhilip is the melody King in Malaysia but we don’t have to tell you that do we?

‘Uyirai Tholaithen’ and ‘Kanavellam Neethane’ is a song we’ve heard thousands of times, yet it never loses its splendor when we hear it from Dhilip Varman’s angelic voice. Gosh we still couldn’t get over his live performance!

This duo is just phenomenal.

Starting off with power-packed music beats, they have kept the listeners on the edge of their seats with their beats and high-energy music. Music Kitchen has the power to weave magic with their music and heart-touching numbers of tracks that can reach the depths of one’s soul.

Amos Paul – The heartthrob of recent single ‘Maruthe Idhayam’ hit the stage and the amount of love he received on that day was amazing. Arvind Raj who later joined hands with Amos set ablaze by singing his latest hit song ‘Kanamma Kanamma’ which synced into the choreography amid a display of LED concoctions.

The golden age of one-hit bands that none of us could forget to date. Hervin’s take on the stage made us remember some of the era’s most famous hits and the artists/bands we actually listened to during our childhood.

The moment they sang ‘En Scooter Vandile Unnai Ettikanum’ -the audiences started to groove along with their energetic performance.

Just a glimpse of Yuvan’s countdown grand entrance. That was enough to fill the Axiata Arena Stadium with cheering and screaming people. When the singer kindly said “Hi Malaysia Day 2” the arena exploded.

Donned in an all-black ensemble, he looked very much like the cool sensation he is, as the excitement spread inside the arena. He started off with the famous ‘Rowdy Baby’ song along with the ever gorgeous Andrea Jeremiah and we just couldn’t sit still any longer. From the moment they took over the stage, it was all about grooving on the dance floor.

The magic of Oru Naalil was not only amplified by Yuvan’s voice, he definitely enthralled the audience with his iconic album that deserves an entire spot to date.

Yuvan; A musician who can make you sway under his melodies that feel like they are moving you back and forth, and then light you up like a rocket ready to jump from earth.

High energy and intensely emotional performance from the MAN himself!

The band’s signature darting guitar solos and whirring frenzied riffs on the track bewitched the audience to have one final dance. To add to the extravaganza, they cranked things up a notch one more time, finishing on one of their best – the offbeat and high energy debut album favourite ‘Rowdy Baby’.

A special mention to singer Neha Basin, who can pull off Yuvan’s composition with flair. She ignited the crowd with Sei Etavathu Sei (Billa), which was given a more upbeat spin from her dance movements and of course the cheering of the audiences. She swayed her hips from left to right to the beat, and every now and then, she exuded a sultry cool, teasing her audience with belly-dancing moves that would send her fans screaming for more.

The lineup of singers for Day 2 was as phenomenal as Day 1 with Srinisha, Diwakar, Premgi, Priyanka, Vishnupriya, Vijay Yesudas, Rahul Nambiar, Sam Vishal, Teejay, Nithyashree, Anusya and Ranjith as the core members.

The singers jived along with the audience while, Yuvan on the other side sat down at the piano to perform a handful of songs for his fans.

As we closed the last leg of the First International Concert in Malaysia, it was overwhelming to see thousands of music lovers come together to witness this living legend. Let’s give a special shout out to the brainchild of Yuvan -25 Live In KL, Malik Streams Corporation who has pulled out a mind-blowing concert after 2 years of the pandemic. You guys have made us lose our voice for the next few days!

And to many Yuvanisms out there, that made up for everything! 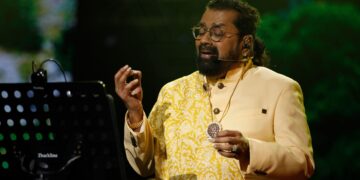 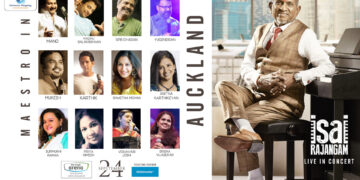