An interesting genre featuring the best of Malaysian Tamil cinema will be hitting the big screens tomorrow (28th July 2022).

Helmed by Govind Singh, Senthozhan Sengkathirvaanan is all set to see its light nationwide. Touted to be a psychological thriller flick, Kash Villanz, Moon Nilaa, Shamini, Cellina Jay and Chandinie Kaur will be playing pivotal roles.

The brainchild of Senthozhan Sengkathirvaanan has carefully come up with such a wonderful concept of storyline and the teaser was mind-blowing. Have you watched the heart-pounding teaser?

The film depicts a young man dealing with mental health issues and navigating bipolar disorder at a time. Amidst this, his secret admirer learns that there is more to the story. At one point, the darkest and most dangerous secrets unfold. Thereafter, she finds herself battling a dark and dangerous mind game after encountering numerous manipulative, evil, and twisted incidents. Life is turned upside down even further when she witnesses something from the window while spying. But, did she see what she thinks she saw?

To fill in the blanks, you’ll need to watch the film at your nearest theatres.

Poketplay Films, the Malaysian distributors of Senthozhan Sengkathirvaanan, took to social media to announce the cinema listing to fellow Malaysians. The flick will be screened across the nation, in all Malaysian states, with the exception of Kelantan and Perlis. 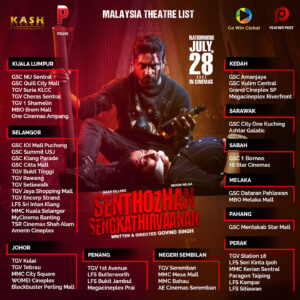 Best wishes to the entire team!