As long as women are still the subject of discrimination, the world can't progress. 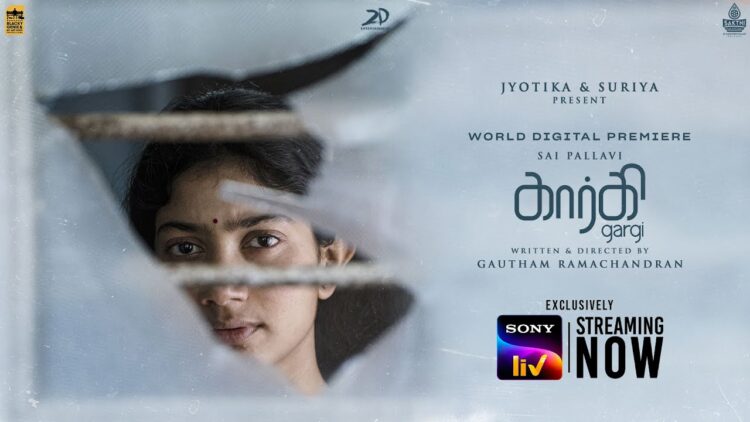 Touted to be an emotional legal drama, Gargi combines the elements of a heist flick and courtroom drama to deliver a gritty story that constantly plays hide-and-seek with your imagination and all your preconceived beliefs and judgments.

So, what does GARGI mean?

GARGI – A well-educated woman who is capable of managing her personal life and problems that the family face during their toughest period. This movie can give you the best definition of this powerful word.

We have seen glimpses of the immense acting of Sai Pallavi in movies like “Premam (2015)” and “Love Story (2021)”, but Gargi is the first movie to fully explore her immense potential. She plays the lead role in the film by acting the role of a dedicated teacher who becomes caught up in a legal mess after her father has been detained on suspicion of child abuse. The rest of the narrative follows her as she strives to obtain justice for her father while being caught between an unempathetic legal system and a suspicious, quick-to-judge society.

With no prior experience. Will she be able to win the case?

Gargi gets a lot of things right. From capturing an educated woman to showing how a woman can adequately establish their knowledge with experiences, observation, and perseverance. While it raises many pertinent points about sexual abuse in a sensitive manner, it also showcases how a small change in perspective can make you see a situation differently.

The well-versed of the whole script & screenplay of this film need special mention. One of those thought-provoking dialogues from #Gargi was the question about the double standards of society towards women.

The director, Gautham Ramachandran, didn’t just show the audiences the forms, personalities, and hierarchies of women and femininity; he also demonstrated the endless array of genders. This movie was never biased; it always portrayed balance for every character and their understanding of the situation, creating a different intensity.

There’s no doubt that a mystery legal drama requires a lot of time to develop the plot. What makes the writer amazed was the essence of thrill in it throughout the movie which deserves a standing ovation.

Sai Pallavi’s top-notch performance ought to be a strong contender for a National Award, such is the grace and poise she brings to the character. Only an actress of her calibre could have communicated such vulnerability and emotion and remained committed and earnest in her pursuit to exonerate her father.

The climax will hit you like a ton of bricks. Curious to know the why, the only way to know is to watch the movie to fill in the blanks.

Gargi is unquestionably the finest movie in the Kollywood industry that has been made so far in 2022, with the potential exception of Kadaisi Vivasayi, and it’s an essential must-watch.