Ponniyin Selvan will be the first Tamil movie to be released in the IMAX format and will be available in 5 languages. 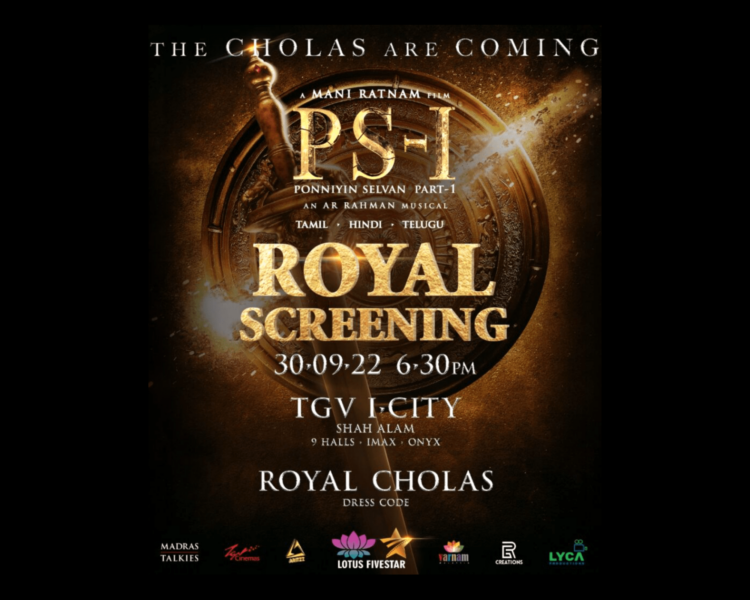 All Kalki’s fans must be living the dream right now! The character that each of us pictured while reading the book is now visually represented on the big screen.

The most-anticipated Pan-India movie that the entire community was waiting for is finally hitting the big screens on 30th September 2022.

The journey of Ponniyin Selvan adaptations on our cinema screens can perhaps be likened to the long, arduous journeys undertaken in Kalki Krishnamurthy’s novel.

Back in 1958, MGR had announced that he would bankroll Ponniyin Selvan. However, the project never took off. In the early 2000s, the Nayakan duo, Mani Ratnam and Kamal Hassan was contemplating the idea of working together, to realise their dream of adapting the same. They shelved their passion project, but Mani Ratnam brought it back to light in 2019 with a new cast, and it will soon grace the theatres.

We will be witnessing a different side of Mani Ratnam’s directorial since the novel is jam-packed with dialogue, and Mani Ratnam is known for utilising little dialogue in his films.

The spectacular release of the Ponniyin Selvan: Part 1 trailer on 7th September has massively increased the excitement amongst cinema goers.

Ponniyin Selvan: Part 1 revolves around Vandiyathevan, a charming young man who sets out to the Chola land to deliver a message to the King and the Princess from Crown Prince Aditya Karikalan. The story shuttles between Vandiyathevan’s travels in Chola country and the young Prince Arulmozhivarman’s travels in Sri Lanka.

The 3.23-minute-long trailer provides a glimpse of Mani Ratnam’s spectacular vision of Ponniyin Selvan. The six national award holder brings a never-seen-before visual spectacle, based on the 70-year-old epic novel penned by Kalki.

The trailer begins with Kamal Haasan narration mentioning the painting of a brief picture of the Chola empire. Stating that the story of Ponniyin Selvan plays out a thousand years before the beginning of its golden era, the film is set to chronicle the most volatile period in the history of the Chola kingdom and shows us the painful process of rebirth that the dynasty underwent. Each frame from this film was spectacular.

Mani Ratnam was quoted as revealing that the second part of the film is all set to release precisely 9 months after the first part’s release.

The main characters that you should know before watching this movie:

Kundhavai (Trisha) – Kundhavai is an ambitious princess. She is not satisfied with being home decor for the palace. She wants to participate in political discussions and wants to have a say in the most important matters.

Arul Mozhi Varman (Jayam Ravi) – Arulmozhi is the young prince of the Chola Kingdom, the main protagonist of the entire story, who later grows up to become the infamous King Raja Raja Chola the first.

Nanthini (Aishwarya Rai Bachan) – Nanthini who is portrayed as a most beautiful women in the Chola dynasty, is touted to be one of the tragic character and also the main antagonist for this story.

Vandiyathevan (Karthi) – Vanthiyathevan is a brave, adventurous and sarcastic warrior prince of Vaanar Clan, who is also a spy of Chola king Aditha Karikalan and his family.

Watch the mind-boggling trailer below:

LFS, the Malaysian distributor for this periodic-epic flick, took to its respective social media to announce the movie’s release across the nation.

Now coming up next is the big deal!

Varnam Malaysia in collaboration with Lotus Five Star AV will be giving away FREE tickets to watch the Royal Premiere of the Ponniyin Selvan – Part 1 movie exclusively for loyal Varnam.MY readers. Here are the details of the movie night:

Here’s how you can win free tickets and join us!

Contest ENDS on Wednesday at 5pm.

– Giveaway is only limited to participants currently based in Malaysia (but you don’t have to be a Malaysian to join).