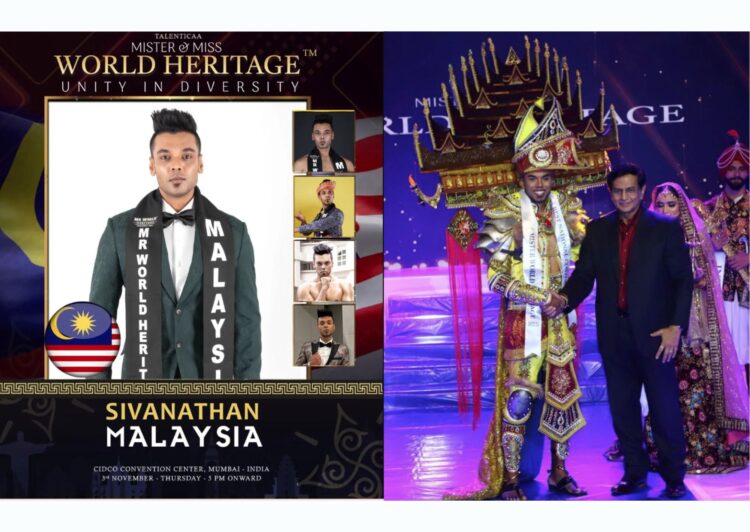 Winning international acclaim is always a matter of pride, and here we have a Malaysian who owns the Mr. World Heritage International 2022.

Teacher by profession, Sivanathan Thevar Vikram was crowned for the Mr. World Heritage International 2022 held in CIDCO Convention Centre, Mumbai, India recently. He represented Malaysia at the World Heritage International under the supervision of the National Director of Malaysia, Ms.Ammetha Malhotra, and International Director Talenticaa, Mr.Shiva. The pageant finale that took place on November 3 was a concept based on United Nations Educational, Scientific and Cultural Organization (UNESCO).

“I made full research about my costume and decided to pick the cultural heritage of Malaysia, and since Hang Tuah has always been my inspiration I decided to choose Malacca as the theme for my Mr. World Heritage International costume”, said Sivanathan during an interview with Varnam MY.

He impressed the crowd by wearing the national costume of Malacca’s empire during the National Costume Competition. Taking inspiration from the legendary Hang Tuah, Sivanathan showcased the Taming Sari an iconic Keris used by Hang Tuah himself, and the majestic Palace of the Malacca Sultanate as the backdrop. This national costume showcased the rich culture of the Malay race such as clothing, architecture, and weaponry.

Furthermore, Sivanathan conveyed his utmost appreciation and credit to the most renowned fashion designer, Nthiran Krishnan from Penang. It was his idea to come up with the Melaka Sultanate Palace Museum backdrop and costume.

“Also when one takes time to look closely at my costume, I have actually included all three Malaysian traditions inside. The main costume features the Malay legendary Hang Tuah, the backdrop features the Chinese temple, whereas the ankle near my legs represents an Indian tradition.

Sivanathan is not only a teacher by profession but also a dance choreographer. Kick-starting his pageant journey in 2021, he won 1st runner-up for the  Supermodel Universe Malaysia 2021.

“I would also take this chance to thank the main organiser, Mr.Shiva, by Talenticaa, International Director of Mr.World Heritage from Mumbai India.  He was the main support and backbone throughout this journey. And also both my Manager, Mr.Kai, and Coordinator, Ms. Jojie “, he added.

This doesn’t stop here, I have more goals and I will keep striving – Sivanathan

Best wishes to this champ on his success in winning the Mr. World Heritage International title and for all his upcoming goals!