A big #Respect to this brilliant singer and to the entire production team for this historical feat. 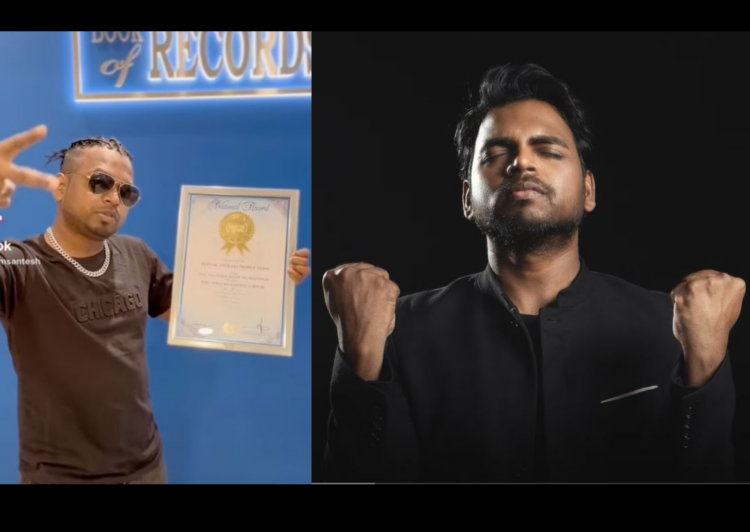 Santesh has astoundingly stamped his name once again in the Malaysian history book!

Santesh Kumar Sukumaran, one of our Malaysian music pioneers who needs no introduction along with his incredible production team has recently wowed everyone by impressively releasing 24 brilliant songs in just 24 hours. The 34-year-old singer and composer set this unbreakable record on 24th October by releasing 24 masterpiece tracks on Rentak Angkasa‘s youtube channel.

These are twenty-four amazing songs that this crooner has delivered:

It is just mind-blowing to know that our very own talented Malaysian artist is able to pull off this unimaginable feat. This great accomplishment needs to be rewarded right?

And yes, after so much of buzz circling around highlighting why Santesh and his team have not been recognized with a Record, has been answered. Finally, the Malaysia Book of Records has honoured Rentak Angkasa Productions for having the ‘Most Songs Released in 24 Hours’, in a total of 24 songs on their official youtube channel.

He shared this exciting news with his beloved fans by uploading a video.

Upon receiving this recognition, Santesh said, “I appreciate it. It means the world to me,”.

Furthermore, he expressed his utmost gratitude to each and every one who was involved in making this mind-boggling project.

Santesh has engraved his name previously in our history book.

Santesh was bestowed with a National record after the Tamil version of “Amalina” becomes the first music video to gain more than a million views on YouTube in just 3 days.

To date, the Tamil version of the Amalina track has over 10 million views while the Malay version scoops over 37 million views.

It goes without saying that #Santesh24 is the most extraordinary feat an artist has ever accomplished.

Kudos to the entire team who shed their heart and soul for producing 24 amazing songs. Each and everyone who travels throughout this journey needs to be lauded. You guys are awesome!