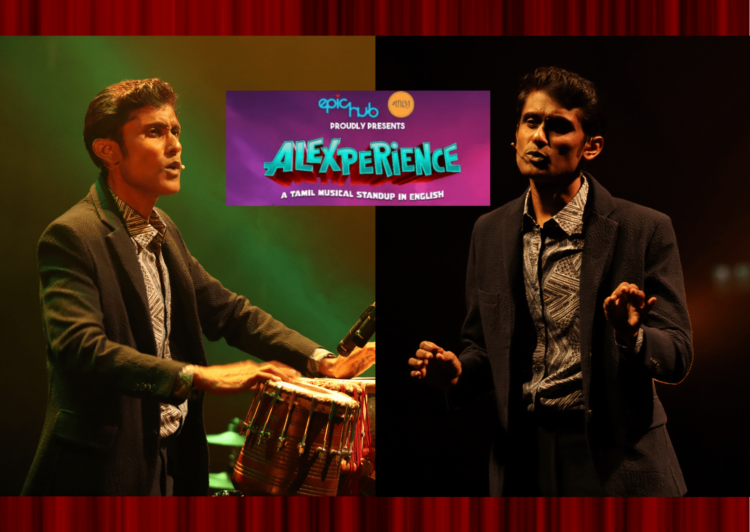 Fred Allen said “It is bad to suppress laughter. It goes back down and spreads to your hips,”

The multi-faceted standup comedian, Alexander Babu yet again proved that his second biggest show in Malaysia was a huge success.

“Alexperience” – A Tamil Standup Comedy in English’ gig was held last Sunday – 20th November 2022 at PICC, Putrajaya. The show that went on for more than 180 minutes was indeed a much needed stress relieve amidst the stressful election week.

Without further ado, let’s delve in as to why “Alexperience” was an A+ STANDUP COMEDY SHOW along with a sprinkle of A-stounding moments that happened during the show;

At 7pm, there was a pre-recorded announcement by Alex indicating a few instructions which made the audience smile with his witty narration. Following that, there were two  additional announcements as a countdown which was played every 10 minutes till 7.30pm to gear up the guest’s excitement.

Alexander Babu’s second show in Malaysia is touted to be one of his most-attended shows in any country. This is the first time he is performing with more than 2000 guests in a venue. (He was even amazed by the crowd and how lively they were throughout the show)

Alexperience went on for more than 180 minutes? Yes, it’s true. Alex presented the show for about 3 hours and 25 minutes. To be honest, it was as if time stood still as we were sitting at the edge of our seats the entire time watching his performance which was just jaw-dropping.

What is Alex’s show without seeing him performing live instruments, right? The first instrument that he played during the gig was ‘PARAI’. He had a significant reason for playing the instrument ‘PARAI’ first to pay respect to the honourable Tamil Nadu instrument. During the gig, he also played a variety of instruments effortlessly like the cajón, high hats, and more.

Alex kicked off the show by singing a devotional song. Well, it’s not just an ordinary song. With the devotional song rhythm, he conveyed current issues like coronavirus to global warming issues which made the audience go awed with the excellent narration and singing he did in one go.

We all know Alex is known for how he beautifully juggles two languages whilst performing on stage. Watching it in front of our eyes was just astonishing. It’s kind of difficult to convey and perform in two languages, but Alex skillfully grasps the crux of the message and delivers it fluently in both Tamil and English. (It was simply fascinating)

Before diving into this point, let me briefly explain to you this movement. #Metoo is a social movement against sexual abuse, sexual harassment, and rape culture, in which people share their experiences of sexual abuse or sexual harassment and spread awareness about it.

Coming back to the point, Alex dedicates 1-minute to all the advocates in this #Metoo movement. He thoughtfully emphasized the importance of this issue needing to be heard by the guest. He also said that this is a wake-up call for everyone. With that being said, let’s create apprehension and awareness on this issue and hope that no one would be another victim of this dirty deed.

From 80’s evergreen actor Mammootty to viral Malar Teacher, Alex kept the audience hooked to his story till the end with his compelling storytelling. This particular content received a tremendous reaction from the audience from clapping to ear-deafening cheers.

We all recognise him as a great musician and comedian, however, he is also a fantastic actor. During the show, he sang like Maestro Ilayaraja, acted like Nadigar Thilagam Sivaji Ganesan. Even the famous pattimandram speaker, Solomon Pappaiah was portrayed in this show along with the viral Blue Sattai Maran. (It was really incredibly funny and on point I must say!)

Another feature of this performance that kept everyone immensely captivated was the way he deconstructed a song’s lyrics, word by word and sentence by sentence, in an enjoyable and entertaining way. Every word and sentence he interpreted received huge applause from the audience.

A special shoutout to the Epic Hub team for making the ticket redemption for this show seamless. Upon scanning the QR code, patron were allowed entry into the hall which made the whole process smooth and easy. Following that, we were ushered to our seats in an orderly manner with the help of a delightful group of volunteers. In addition, Epic Hub kept everyone hydrated by generously providing water bottles before the show started.

During the show, there were some technical issues with Alex’s mic and the lighting on the stage. However, the Epic Hub team had everything under control and rectified it right away.

Everyone was so enthralled by this show that we all left with tearful eyes and stuffed cheeks from laughing so hard.

To sum up ‘Alexperience – A Tamil Standup Comedy in English 2022′ Live in Malaysia was a memorable and spectacular standup comedy show that was a perfect wrap up for 2022.

Thank You Alex, we are super excited for your next gig in Malaysia!

Thumbs up to the Epic Hub team for all of their efforts and dedication leading up to this extraordinary event. We are definitely excited to see what they have in store for us next.

“A good laugh is a mighty good thing, a rather too scarce a good thing.” – Herman Melville

Varnam Malaysia is the Official Media Partner of ‘Alexperience – A Tamil Standup Comedy in English’.