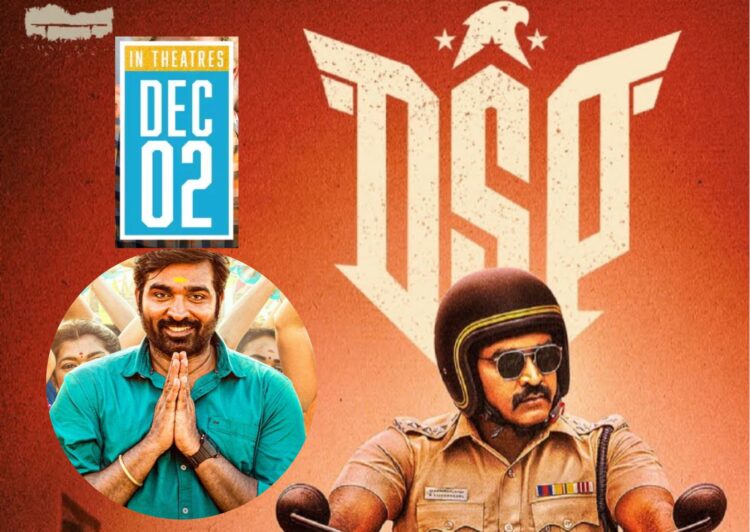 Makkal Selvan, Vijay Sethupathi is back with his next release, another interesting cop story, titled ‘DSP’. Will this be his second-best cop role-play after the “Sethupathy” film?

This movie is scheduled to be released worldwide in theatres on December 2, 2022. Its action-packed trailer which was released on November 25 reached almost 2.9 million views. Things bring fans amusement in makkal selvan’s next ironic humor film.

In the trailer, Vijay Sethupathi (VS)  will be seen as a cop. While Femina Miss India World 2018 Anukreethy Vas plays the female lead in the film. Anukreety plays the role of a volleyball player who aspires to become a DSP but fails the test. Baahubali fame Prabhakar plays the villain in this film, which has Shivani Narayanan, Ilavarasu, Deepa, Pugazh, and Singampuli playing supporting characters. ‘DSP’ is going to be a battle between a cop and a politician.

It’s going to be an entertaining film with this versatile actor. D Imman’s music in the trailer already seems to be a jam and is expected to carry the same impression for the film. Adding to it, DSP’s first hit single ‘Nalla Irumaa’ by Vijay Muthupandi and sung by Udit Narayan, SenthiGanesh, and Malavika Sundar in D Imman’s music has been released by popular music composer Anirudh. ‘Nalla Irumaa’

Check out the trailer on Sun TV Youtube channel.