Dr T Sachithanandan was the first anesthetist to lead the Malaysian Medical Association. 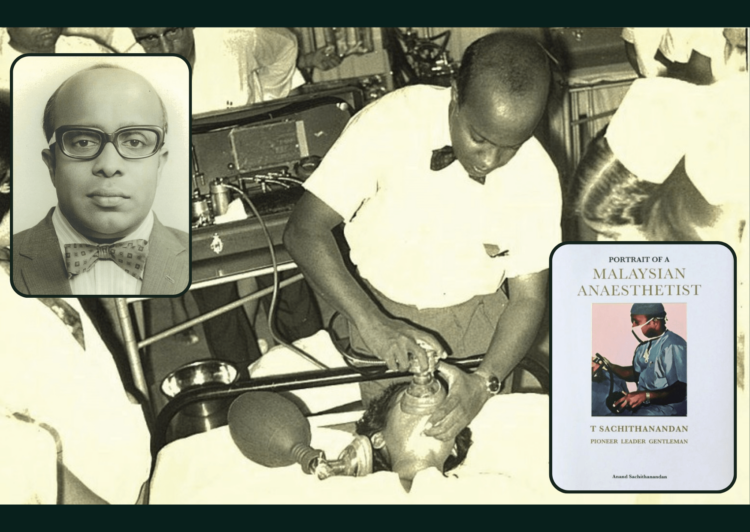 “Doctor is the profession where knowledge, power, and heart come together.”

In Malaysia, there are many doctors who are known for their incredible proficiency. Today let’s look into an excellent doctor who served as an exemplary to many until now.

Thanks to Dr Anand Sachithanandan, who penned an inspiring story of a great doctor, Dr T Sachithanandan, the man behind the evolution of anaesthesiology and intensive care in Malaysia, who is also his father.

In late 1968, the first intensive care unit (ICU) in a Ministry of Health hospital opened its doors. This was at the General Hospital Johor Baru (since renamed Sultanah Aminah Hospital). The driving force behind it was a visionary young doctor called T Sachithanandan, one of the first Malaysians to qualify as an anaesthetist.

That inaugural unit began with four beds. Five decades on, the country would have ICU facilities at 56 Ministry of Health hospitals nationwide, with a capacity of 691 beds (as of 2017). These facilities have healed and saved countless lives. Indeed, intensive care medicine has been a game-changer for healthcare. And, as the global Covid-19 pandemic has shown, it has been a critical lifeline.

The story of how Malaysia got its first ICU (even before neighbouring Singapore) is one of the many intriguing nuggets in this book. This biography also presents a front-row seat not only to the boundary-pushing career of Sachithanandan but to the evolution of intensive care in Malaysia as well as the poorly understood field of anaesthesiology.

Aside from being a pioneer in an intensive care, Sachithanandan led the way in popularising techniques of regional anaesthesia with the use of selective nerve blocks. At the time (in the 1960s and 1970s) regional anaesthetics were sparingly used here. The UK-trained anaesthetist also played an outsized role in building postgraduate medical training locally and was a beloved mentor to many junior doctors.

Sachithanandan was the first anaesthetist to lead the Malaysian Medical Association. He co-founded several other important medical institutions, including the Faculty (now College) of Anaesthesiologists of Malaysia in 1975 and was the State Anaesthetist of two large states, Johor and Perak. Tragically, he died during heart bypass surgery in London in 1981. He was only 49.

The first-time author, Dr Anand Sachithanandan, who was only eight when his father passed away, left a huge void in his life. He currently practises as a cardiothoracic surgeon and is also the founding president of the Lung Cancer Network Malaysia (LCNM). As he neared the age when his father died, he felt moved to learn more about him.

That has culminated in a well-researched and elegantly narrated biopic that is a timely tribute to a titan of local anaesthesiology.

The book stands out for authentically tracing the development of anaesthesiology and intensive care during our nation’s formative years. It also shines a light on his father’s days as a student leader in Calcutta and on his time in swinging 1960s London, where he did his specialist training.

However, it is the heartfelt memories of and accolades from the many who worked with him that capture the essence of Sachithanandan’s exceptional life. The late doctor was known for his legendary calm under pressure and remembered fondly for his good nature, charisma and kindness as well as being a dapper dresser with a fondness for silk bow ties.

The author gathered information from his wonderful 82-year-old mother, Punithavathy, the wife of the late Dr T Sachithanandan.

She shared her recollections from decades ago, some of which must have been painful. He also managed to connect with his father’s few surviving contemporaries and his junior doctors, who willingly shared insightful anecdotes. For the historical information, he drew upon websites, newsletters and other publications such as Berita Anesthesiologi. He also fortuitously discovered a dusty old folder of letters between his father and his grandfather from the early to mid-1950s, which gave him a precious glimpse into his life then.

“The book is not just a tribute to my father but also to the work ethic and struggles of the first-generation anaesthesiologists during our nation-building years. For me, writing it was cathartic. His exceptional life fills my heart with pride and hope. It also inspires me to be a better person and doctor. I hope his story similarly inspires others.” Dr Anand Sachithanandan wrapped.

If you’re keen to know more about this great anaesthetist, you may purchase this book from the publisher Silverfish Books and independent bookstores Gerakbudaya and Lit Books, which is only RM100.

Proceeds from the book sales will be donated to the Malaysian Society of Intensive Care (MSIC) and the LCNM.