Bollywood Films Released In 2022 That Grossed Above Rs 100 Crore 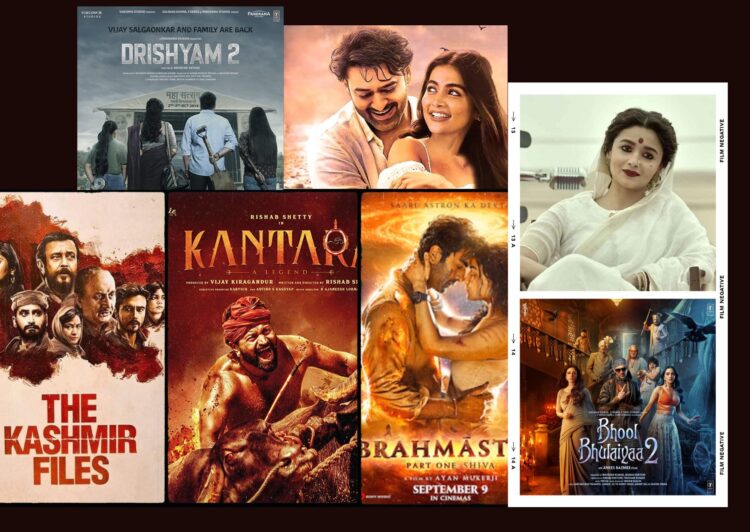 Lately, we have been witnessing the wrapping up of Kollywood and Tollywood films. Here’s one to the Bollywood film industry that had its films released with gaining tremendous interest from fans and audiences, from various ethnicities.

In the midst of back-to-back flops as reported by India Today, several Bollywood movies made it to the top entering the Rs 100-crore club. Let’s look at the movies that had outstanding box office success this year as the year draws to a close.

The Kashmir Files reveals the brutal sufferings Kashmiri Pandits went through in 1990, during the Kashmir insurgency. This film is based on true stories in video interviews of the first-generation victims of The Kashmir Genocide of the Kashmiri Pandit Community. It’s a heart-wrenching narrative of the pain, suffering, struggle, and trauma of Kashmiri pandits and questions eye-opening facts about democracy, religion, politics, and humanity. The film went on to earn more than Rs 200 crore at the box office.

Rishab Shetty’s Kantara opened in theatres on 30 September 2022 and emerged as a massive hit in Karnataka. The film was then remade and released in Telugu, Hindi, and Malayalam. Kantara grossed Rs 400 crore worldwide! Kantara is an action-thriller, directed by and starring Rishab Shetty. It is produced by Vijay Kirgandur under Hombale Films, the banner behind the KGF franchise.

Brahmastra is a superhero drama that revolves around a simpleton who shares a special bond with fire. Featuring Alia Bhatt marking her first collaboration with her fiance Ranbir Kapoor. The cast includes Nagarjuna, Mouni Roy, and Amitabh Bachchan. It is directed by Ayan Mukerji. Shah Rukh Khan has a special appearance in the movie. Brahmastra was released in theatres on 9 September 2022. The film went on to earn Rs 431 crore at the box office.

Ajay Devgn’s Drishyam 2 had a massive run at the box office. Starring Ajay Devgan, Tabu, and Akshaye Khanna, the film earned more than Rs 300 crore at the box office and is still running in some theatres. The Abhishek Pathak directorial venture opened at the ticket windows on 18 November 2022 with Rs 15.38 crore. Gradually, the film kept breaking records at the box office collection.

Directed by Aneez Bazmee, Bhool Bhulaiyaa 2 hit the cinemas on 20 May 2022. It earned a total of Rs 266 crore at the box office. This film features Kartik Aaryan, Tabu, Kiara Advani, and Rajpal Yadav in pivotal roles. The film has been co-produced by Bhushan Kumar, Krishan Kumar, Murad Khetani, and Anjum Khetani. The storyline follows Ruhan, a fraud psychic who is brought in to deal with the return of Manjulika in the Thakur palace. However, he unintentionally aggravates problems.

Prabhas and Pooja Hegde impressed the audience with their performance in Radhe Shyam. The epic love saga took the box office by storm worldwide. The film earned around Rs 200 crore worldwide.

India’s entertainment industry for sure went through a lot in 2022. The amount of mega hits they have come out within a year is just magnificent. We’ll hope for greater ones to be released in the coming years.

Now that’s a wrap to the Indian cinema from Kollywood to Bollywood films for the year 2022!

Bollywood Films Released In 2022 That Grossed Above Rs 100 Crore