“Boys can do whatever they want, but when a girl does the same, she’s a b*tch,” – Oviya

As part of the promotion of her upcoming film, 90ML, actress Oviya has been interveiwed by all main Tamil Nadu based entertainment portals. Her interview with popular portal Indiaglitz was by far the most reprehensible of the lot.

Here is some context for the uninitiated. Oviya’s first film as a lead actor since her stint on Bigg Boss Tamil which propelled her to fame is 90ML. The trailer of this film was released earlier this month and it featured Oviya and her band of merry women drinking, smoking, making out with men, and talking about their breasts and oral sex. Need we tell you how much backlash this incited from the horribly conservative Tamil audience?

The questions posed by the Indiaglitz interviewer were borderline disrespectful, but Oviya handled it like a champion. She starts of strong, while talking about consumption of alcohol, saying, “Boys can do whatever they want, but when a girl does it, she’s a bitch,” and “If a girl drinks and smokes, is she a bad person? And if she wears a chudithar, does that make her a good person? I really don’t understand this concept,”

The interviewer then asks Oviya ridiculous questions that he would probably never ask any male actor, things like “How many rounds (of drinks) do you usually last?” Oviya, however, is quick to pick up on his probing, and says, “Oh, are you asking me indirectly if I drink? Let me tell you,” He then goes on to ask when she had her first drink.

“I am not a drunkard, as you think,” she tells the interviewer. Kudos to him for asking only two questions relating to her job throughout the entire almost 20 minute interview.

The interviewer asks her when she had her first kiss. It is quite impossible to picture a mid range male actor like Jiiva or Atharvaa being asked such a question, let alone the bigger ‘heroes’.

Nevertheless, Oviya is refreshingly forthcoming, and is happy to share her first kiss experience. But she knows where to draw the line. “People assume that because I am an actor they can ask me any personal questions, but they forget that we need some personal space for ourselves too,” she tells the interviewer before he can ask who she shared her first kiss with.

Oviya is a smart woman. This interview is a testament to that.  She is aware that 90ML will not change things among the Tamil audience immediately, and tells the interviewer that it will take time for the change to develop in their conservative minds.

“In no other state, actors enter politics like in Tamil Nadu,” she says. “People need to understand that we are actors, we are just delivering a dialogue prepared by a scriptwriter. That does not mean that those are our words,” She goes on to advise the Tamil audience to watch movies and appreciate it as a form of entertainment, not anything more to avoid disappointment.

She talks about why she agreed to do 90ML, and she tells the interviewer that she wanted to do something different, a role that will challenge the societal norm. “It’s okay if my image is damaged, but I want people to be able to see men and women as equals,”

Oviya also speaks about the director of 90ML, Anita Udeep, whom she holds in high esteem. “Anita had the guts to attempt a topic that has never been worked on in Tamil cinema. I am also like that, I like to work on something new, to break stereotypes,”

“The movie is an experiment,” she says. True enough, there isn’t one Tamil movie released that features women doing exactly what men do in almost every commercial Tamil movie. 90ML will be a first.

And yet, she knew that she wanted to work on film where no gender is sidelined. “I don’t want to put men down in this movie. Like what is done in commercial movies to women. 90ML just features women having fun,”

Oviya also responds to the negative comments that were brought out. The comment was, the respect for Tamil films has been decimated with 90ML, to which Oviya replies, “Is a Tamil film a teacher, to give that respect? If that is the case, every Tamil movie should be banned! There is always a villain, an item dance, sex and violence. So should we stop releasing Tamil films completely?” 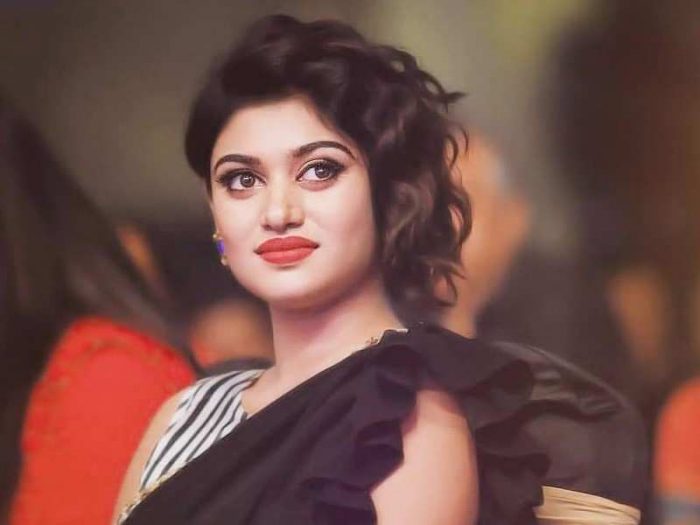 And to the culture guardians who are worried that 90ML may bruise the holy Tamil ways of stifling women and celebrating patriarchal practices, she has this to say, “Your culture isn’t so weak that it will be disrupted by a mere film meant to entertain,”

“I am not going to live my life for others’ expectations. This is my life and I’m going to do what I want to do,”

90ML is expected to release on the 1st of March. Here is the complete interview if you’d like to see how she coolly handles the haters.