Former Cop A.Chandramalar, The Epitome of Bravery Who Serves As A Remarkable Exemplary Till Date

Have you ever heard about this remarkable woman before? 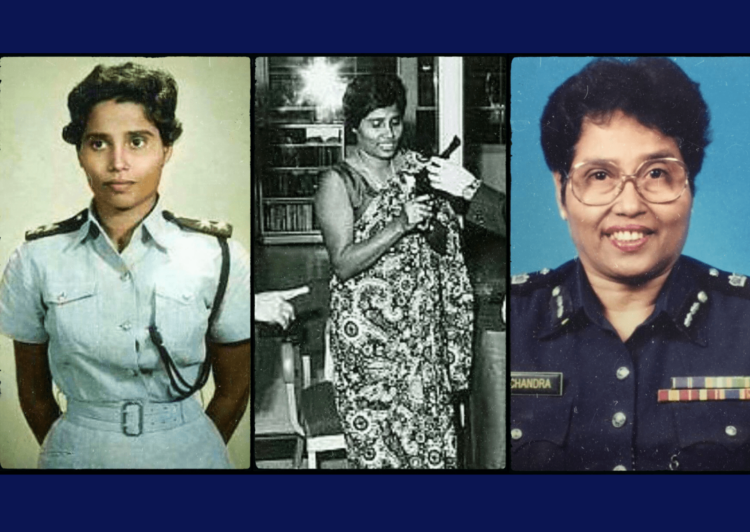 Little do we know, that there are many inspiring women in Malaysia who have contributed to tremendous growth in both the society and economy. Today, let’s reminisce back at one of our iron lady who has helped to shape the nation for the betterment and has been an important epitome of inspiration for many in the sphere of the police department in Malaysia.

Touted as Malaysia’s Woman of Steel, A Chandramalar was a former Assistant Commissioner of Police (ACP) who busted gambling ringleaders, drug dealers, and pimps in Penang. In the 1970s, she made headlines for ripping down brothel doors with a single quick kick.

The Royal Malaysia Police (PDRM) struggled during this period since violent crimes were widespread all over the country. In the midst of this turmoil, this “Woman of Steel” stepped out as the first Indian police officer who many criminals terrified and respected.

Fondly known as Chandra, she was born in 1939 in Jaffna, Sri Lanka. However, the fourth child in a family of five girls was raised here in Kluang, Johor. After a brief stint working as a primary school teacher, the daughter of a railway clerk and a housewife enrolled in the police department as a probationary inspector in 1960.

While in the force, she effortlessly mastered shooting, self-defence, judo, and direct confrontation with an armed person, establishing that she is just as competent as any other police officer. She was an exceptional sportswoman. Chandra received a posting as an investigative officer at the police headquarters in Penang the year after her graduation. She subsequently spent two years as a prosecutor at the magistrate’s office.

Chandra was the first woman to lead Penang’s anti-vice section in 1972, a time when the island was plagued with prostitutes, gambling, and drugs. She rode Honda motorbikes with her team of 13 policemen as they conducted 200 raids every month, on average, on as many as 15 brothels or gambling sites.

Chandra had also gone undercover, pretending to be a sex worker to trap a pimp on multiple occasions and blending in with the gamblers to have a front-row seat.

“Sometimes, the gamblers would climb out the windows screaming, ‘K*****a cha bor lai leow! (The Indian woman has come!)'”

Chandra was an extremely caring woman who assisted many offenders in rehabilitating, including teenage sex workers and drug addicts, despite earning the nickname “Woman of Steel”. Chandra had once declined to shoot a drug pusher that the team had been hunting for 8 kilometres on motorbikes. Instead, she hit him with her helmet to subdue him when they eventually caught him at a junction.

“One should not sacrifice one’s life unnecessarily,” Chandra emphasized. She also made an effort to save a young American lady who had come to the country to conduct a study for her doctoral degree. Chandra said, “We detained her in a raid.

“And seeing the needle marks on her arm, I could see her drug habit was the reason she was prostituting herself,” Chandra said.

Even though the young woman had overstayed her visa, Chandra was able to convince the immigration officials to let her depart Malaysia. She turned it down and subsequently overdosed at a hotel. Chandra, however, was unfazed and continued to lend a hand wherever she could. For example, she rescued a 12-year-old sex worker from a hotel that charged each of her customers RM100 but only paid her RM5.

She also described “When I visited her again in a welfare home, she thanked me for saving her and showed me how well she had learned to sew.”

Furthermore, Chandra was awarded with two letters of appreciation and a Pingat Jasa Masyarakat (PJM) from the Governor of Penang for her 90% conviction rate over her 30 years as a police officer.

She believes that she is “equally as good as the men”

Chandra was one of two Malaysian women police officers sent to the International Law Enforcement Academy in Washington, D.C., in 1974 to take a course in police administration with a narcotics orientation (ILEA).

In 1977, she was given a promotion to Assistant Superintendent of Police (ASP), making her the first female executive staff at the Kuala Kubu Bharu Police College. She also earned the Ahli Mangku Negara (AMN) and a Kesatrian Mangku Negara (KMN) from the King in 1977 and 1994, respectively.

In all courts, she was in charge of supervising 30 prosecutors and 200 police officers. In addition, she had to engage with the judiciary, the Attorney-Office, General’s the Bar, and the general public.

Eventually, Chandra departed from her role as Assistant Director of Research and Planning at the Criminal Investigation Department (CID) of Bukit Aman in 1994. She was the first non-Malay woman to be honoured in this way, holding the rank of Assistant Commissioner of Police (ACP).

At the age of 80, Chandra continues to lead a simple life in Klang with her family. She helped her spouse teach kids in the neighbourhood till he passed away.

Chandra is still often sought out for legal advice due to her vast knowledge and experience with the Malaysian legal system. She is also well respected by the local Sri Lankan Tamil community.

It’s really intriguing to see the contributions of our “Woman of Steel”, playing a big part to our nation. We can proudly pass down the heroic history of this legend to every coming generation.