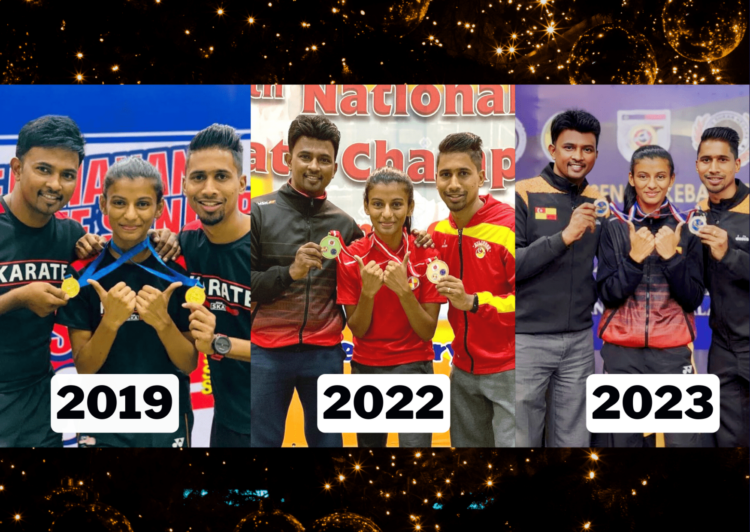 It’s the second week of the year and our national karate athlete has made us proud once again. What a beginning for Shahmalarani!

On the 8th of January 2023, Shahmalarani Chandran magnificently clinched not one but TWO Gold medals at the 41st National Senior Karate Championship 2023 which was held at Melaka Historic City Council basketball hall in Bukit Serindit. With her killer kicks, this 25-year-old athlete sealed two golds for Individual Kumite below 50kg category and the Female Team Kumite category.

With this significant win, the young lass completes an astounding hat trick.

Previously, this champ brilliantly earned two gold medals in the National Senior Karate Championships in 2019 and 2022, making her claim this significant triple victory.

This is not the first time this karateka has made us proud, she brought home a Gold medal on her debut on the international stage, Hanoi SEA Games 2021 in Vietnam and has continuously showcased outstanding performances ever since. She also made extraordinary history by becoming the first Malaysian to clinch the World Karate Federation (WKF) Series A (K1) International Karate Championships last year. She continues to win various championships including the 2022 ASEAN University Games, the Finnish Open and the Asian Karate Championship in Uzbekistan.

Congratulations Shahmalarani for the first win of 2023 and keep thriving for the best in your upcoming endeavours.