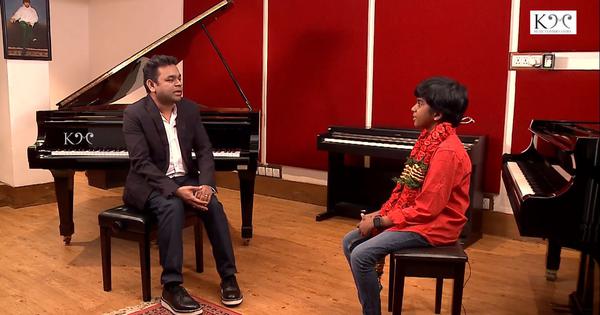 The Academy Award winning music composer AR Rahman is known to champion many young artistic talents and encourage their growth and advancement. In one such initiatives, the Mozart of Madras founded a higher education institution in 2018 called KM Music Conservatory (KMMC). KMMC has churned many talented musicians with their part-time and full-time courses and their collaborative partnerships with international educational institutions.

One of the students of KMMC recently bagged USD 1 Million and the title of “World’s Best” when he won the judges with his incredible skills in piano. And he is ONLY 11! Lydian Nadhaswaram, a prodigy pianist from KMMC has caught global attention with his skills and speed at playing the keys.

AR Rahman has been following Lydian’s journey throughout the reality show ‘World’s Best’ and even shared videos of Lydian playing the piano to his 2.8 million followers on Instagram. When Lydian became champion, AR Rahman decided to interview the young maestro instead.

The 10 minute long interview is nothing short of adorable as young Lydian answers “Uncle AR Rahman’s” questions with a sheepish smile and quiet confidence. Lydian revealed that he practices the piano about 5 – 6 hours a day and he learned classical masterpieces like “Flight of The Bumblebee” by Nikolai Rimsky- Korsakov in 30 minutes.

In one such question, AR Rahman asks Lydian if he plays The Playstation. Lydian who looked confused, answered, “Umm. What is that?”. AR Rahman responded by saying,” You don’t even know what a Playstation is? That is why you are winning. Many kids play Playstation rather than playing music”.

AR Rahman was clearly fascinated by the immense talent and discipline this young man possessed. He even gave some excellent advice on life, career and growth.