Radikaa Calls Out Her Brother, Radha Ravi, For Slut-Shaming Nayanthara 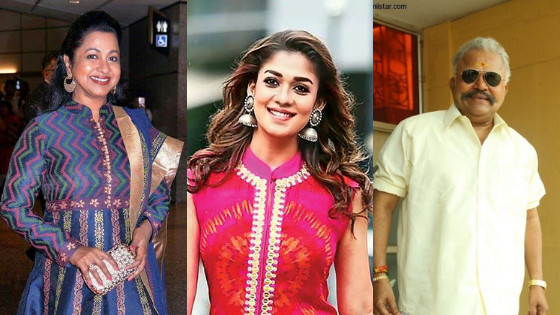 “In my time, actresses like KR Vijaya were offered role of Seetha. Today, anybody can play Seetha. You can cast a person, whom you respect or someone who sleeps around.”

Actor Radha Ravi really had his foot in his mouth at the trailer launch of Nayanthara’s horror film ‘Kolaiyuthir Kaalam’. The actor is known for making distasteful comments and he made quite a scene at the recent event. Radha Ravi also said that he did not believe that Nayanthara should be given the title of ‘Lady Superstar’ as she “should not be compared with people like Rajinikanth and Sivaji Ganesan”. (rolls eyes)

Actors and film makers have lashed out on social media for these misogynist remarks including Radha Ravi’s sister, Radikaa Sarathkumar, and niece, Varalaxmi Sarathkumar. Radikaa took it to Twitter to show solidarity to Nayanthara in a tweet that read, “Nayanthara is one of the few dedicated actors we have today, have the pleasure knowing her and sharing professionals space with her, she is above al this, did not watch full video but met Ravi today and told him it was not in good taste at all.

Hi niece and actor, Varalaxmi Sarathkumar, also had a mouthful for her uncle. She posted a series of tweets on male chauvinism in the film industry and called out Radha Ravi for his disgraceful behaviour.

Shaming women,making offensive jokes on women (which they think is not offensive) degrading women, using women as eye candy have all bcom a part of this #filmindustry thanks to our previous generations of women n men who didn’t react n instead thought it was ok..this is our state

There has been an outpour of support to Nayanthara following this incident with other celebrities such as Chinmayi, Director Vignesh Shivn and TM Krihsna saying #EnoughIsEnough