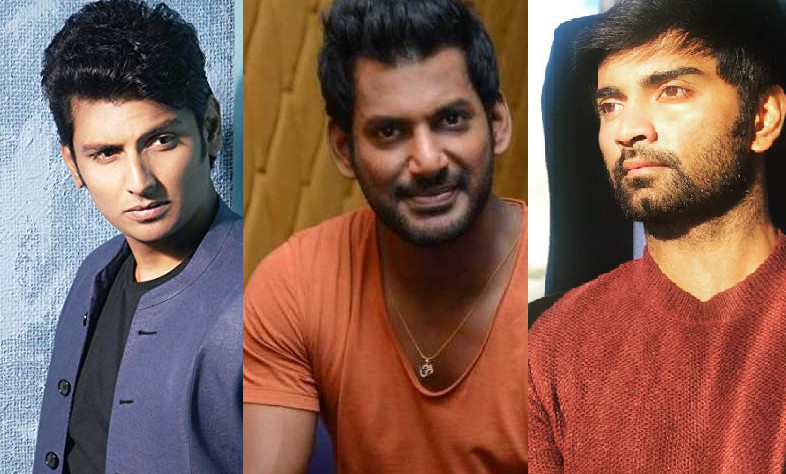 It’s a bountiful day in Malaysian cinemas for Tamil fans as three films hit the screens today. Atharvaa’s 100, Jiiva’s Kee and Vishal’s Ayogya will be showing in cinemas nationwide.

This is a cop thriller, featuring Atharvaa, Hansika and Yogi Babu in lead roles. Directed by Sam Anton, the film appears to be a run of the mill police story with a let’s-protect-our-women angle thrown in.

The film appears to contradict itself in the trailer itself, where Hansika says, “How do you guys claim you’re in love after one look?” Atharvaa’s response makes her character visibly uncomfortable. The trailer then moves on to a victim who calls the Indian police helpline, 100, addressing Atharvaa as “Annaa,” Interesting.

Check 100 out at these cinemas.

Kee is a long delayed science fiction thriller that is finally hitting the screens. Headlined by Jiiva and Nikki Galrani, the filming of Kee was completed in 2017, with the first look of the film released in the same year. Unfortunately, the Kalees directorial was delayed due to unknown reasons.

Vishal Chandrasekhar has composed the music for Kee, and some big names appear on the soundtrack. Vijay Prakash, Devan Ekambaram (Iruvizhi Unadhu – Minnale) and Christopher Stanley (Halena – Irumugam) are featured on the soundtrack, including our Malaysian rapper Sri Rascol.

The showtimes of Kee are here.

Directed by debutant Venkat Mohan, Ayogya stars Vishal, Raashi Khanna  R. Parthiban, K. S. Ravikumar and Pooja Devariya. After the failure of his last offering, Sandakohi 2, Vishal makes a comeback with Ayogya, where he plays a rogue police officer who makes deals with criminals, and calls himself ‘the biggest animal’ because the girl he has his eye on is an animal lover.

Ayogya appears to be yet another film that uses sexual assault as a plot device. Although the trailer ends in a disturbing fashion, with Vishal proudly proclaiming that he is brave enough to whisk any girl away and rape her. Right.

Ayogya is playing on these screens.