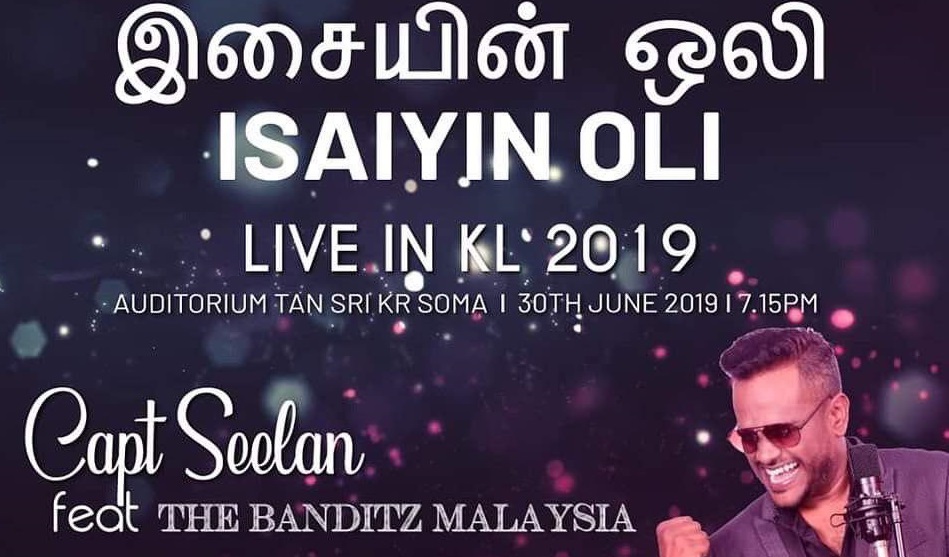 Over the past few years, it has become a norm for event organizers to bring singers from India to perform for the Malaysian crowd. We rarely see Malaysian artistes taking on a solo live show for our own people. Captain Seelan is all set to break this trend with his upcoming live performance, Isaiyin Oli.

“It has been my dream for a while to do this,” Kanaga Seelan Tarmalinggam, better known as Captain Seelan, starts off by telling us. “I enjoy doing live shows, it’s something that I have been doing for the past 20 years,” Captain Seelan was with the Royal Malaysian Air Force for a decade. In the midst of his stint in the army, he joined Astro’s Paadal Thiran Potti. He then left the army, and is now an air traffic controller with the Department of Civil Aviation. His heart, however, never left the stage.

A seasoned performer, Seelan has been performing for private and corporate events for the past two decades. After a brief hiatus from the music scene, he found his footing again with Smule, the musical application. Seelan has acquired a sizable number of followers and fans alike through his renditions on the app.

Some time ago, live shows were part of a trend that Malaysians adored. With the advent of technology, people began losing interest.

“Some time ago, live shows were part of a trend that Malaysians adored. With the advent of technology, people began losing interest. I want to bring back the trend of a live show with Isaiyin Oli,” Seelan tells us.

The singing air traffic controller works closely with SJKT Thamboosamy Pillai Sentul, and along with his friends, have been actively helping the school out with their needs. The profits from this show will be channeled towards the school.

“I didn’t want to give the students the usual things like school uniforms and what not. I want to encourage participation in sports among the pupils. So our team has promised to get them a range of sports equipment, including a table tennis table,” Seelan adds.

Needless to say, the cost incurred when organizing a live show like this can go through the roof. “People are afraid to do live shows because they don’t know if they can garner enough revenue to cover the cost of the show. Let’s get real, it isn’t cheap to organize a show,” Seelan tells us.

The problem is, the Malaysian audience do not hesitate to pay to watch a singer from India but when it comes to Malaysian singers, they expect a free performance. Seelan wants to change this. “Organizers aren’t reluctant to pay RM80,000 to RM100,000 for an Indian performer to come over, but they think twice before forking out any money to hire a local artiste,” he tells us. “Music doesn’t come for free. We have value, too!”

“All artistes have value and that should be recognized. Malaysian artistes shouldn’t be insulted by being asked to perform for free,” Seelan adds, vehemently.

But going forward with Isaiyin Oli hasn’t come without its fair share of detractors. “I have been trolled, people ask me if I am that big an artiste to helm a live show on my own,” Fortunately, Seelan is too dedicated to his craft to let these naysayers get to him.

Seelan will be performing with The Banditz at Isaiyin Oli, one of the most established bands the Malaysian Tamil music scene has seen in recent history. “They do wonderful arrangements, medleys and mashups for Tamil songs, especially for tunes from the 80s and 90s,”

The Banditz do wonderful arrangements, medleys and mashups for Tamil songs, especially for tunes from the 80s and 90s

Speaking of the 80s and the 90s, Seelan assures us that all the songs performed during Isaiyin Oli will be of that era, “AR Rahman and Illayaraaja’s golden years, those are the songs that we will be performing,” Isaiyin Oli will also feature singers Marial Thomas and Prieya Vathani.

Interestingly, this isn’t the first time this team is performing for a live show. Seelan, Marial and Prieya performed together with The Banditz last year, during their stage show, Cover It Up 2018. “Cover It Up was how all of us got connected,” Seelan reveals. If that show is anything to go by, Isaiyin Oli is going to be a rousing success.

“It’s going to be an incredible experience,” Seelan assures us. 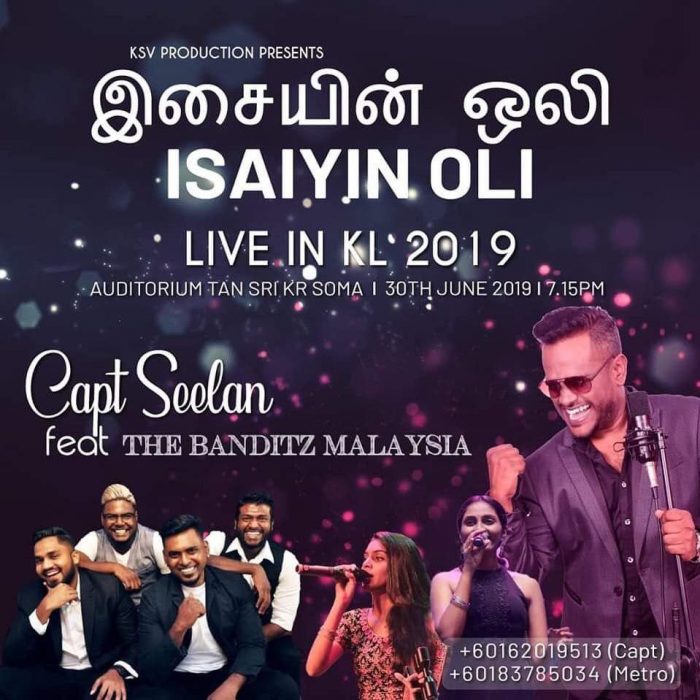