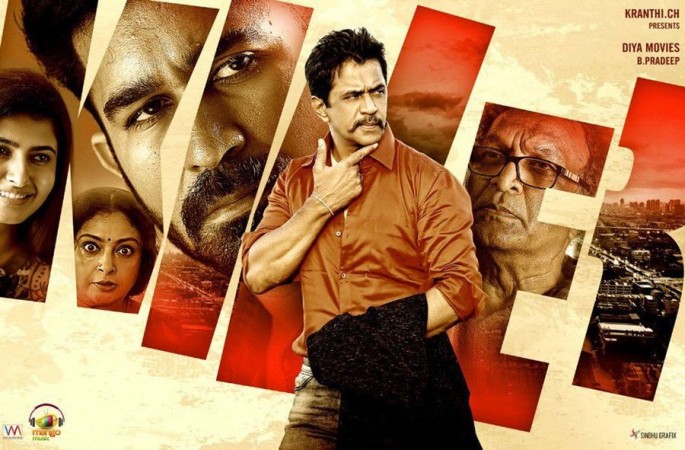 The film opens in black and white. We hear a woman scream her lungs dry. We see the gears of a clock spinning (and indication perhaps, that it’s a film that’ll make our gears spin as well). And then a slit to the woman’s throat by an unknown assailant who’s figure is purposely obscured by an unfocused lens. These are all deliberate stylistic choices. Think of how the blood of the woman slowly coats the white tiles of the floor as we fade into the brilliant opening credits soundtrack. There is more blood, this time dripping down the screen. gradually forming the film’s title: Kolaigaran. The track is sung loudly — it’s a powerhouse of a voice that reminded me of Shirley Bassey belting Diamonds are Forever — and the accompanying imagery has elements of a David Fincher credits sequence. Needless to say, I was hooked.

The opening shot of the film has the camera move slickly from right to left as Arjun walks into frame and picks up the phone (his subordinates are calling him from the police station). The camera pans downwards toward the police station. The way the camera moves as DCP Karthikeyan (Arjun) walks towards the interrogation room where Prabhakaran (Vijay Antony) is held, is smooth. Prabhakaran wishes to confess a crime, which takes us back 44 days. There’s another sleek shot, as the camera glides towards Prabhakaran taking a nap on the couch.

Not a scene-setting song mind you. But an appalling 90s style fantasy-dream-sequence song that not only feels out of place but completely ruins the tone of everything that came before it. The scene wreaks of producers breathing down the neck of writer-director Louis Andrews, telling him that there need to be song sequences (there’s another equally horrible one that happens later) for the sake of pre-release album launches, marketing,  yadda yadda. Or maybe it isn’t the producers. Maybe it’s solely Louis Andrews’ decision, who figured these songs would add a layer of emotion to the final twist in his story. It doesn’t (but more on that later).

What this opening stretch of scenes do is perfectly sum up this mixed bag of a movie. Kolaigaran is an OK movie. From a technical standpoint, it’s actually really good. Andrews has a strong sense of how he wants his film to look. He knows where to place the camera and how to move it in interesting ways. (Mukesh is his cinematographer.) The editing by Richard Kevin is also superb, so much so that a conversation between two people on the phone is a delight to watch. These aren’t techniques that are new or groundbreaking, but it’s certainly not techniques that are usually deployed in Tamil films. There is a wonderfully lit and coloured (neon red) action sequence that takes place at the murder scene, that is worth noting.

The big issue with the film is the writing. Kolaigaran starts off interestingly and keeps you wondering and guessing. As the film plays out, we soon realise that the crime the police are investigating is a different murder than the one we see in the prologue. There’s a burnt-to-a-crisp body and Prabhakaran has claimed he’s guilty. (So, what about the woman at the start, you wonder?) If the criminal has confessed very early on, then what’s the mystery? But there’s a lot more to unpack. We get introduced to more characters — a mother and daughter living across Prabakharan — and everybody is a suspect.

There are a few types of crime mysteries. The slow-burn character exploration procedural like Zodiac, the hardboiled psychological thriller like Silence of the Lambs, the amusing Whodunit like Murder on the Orient Express or Hateful Eight, among other subgenres. Kolaigaran leans towards the latter, made obvious by its roaring, on the nose but frankly very memorable violin/synth musical score. It’s not meant to be taken too seriously. There isn’t much of a character exploration or a serious tone. In fact, some of the tongue-in-cheek jokes are genuinely really funny. Here, characters are just pieces that tell variations of stories that weave together to form a labyrinth. And that’s fine.

However, the maze that takes form isn’t all that interesting. The film doesn’t challenge you to think, because a lot of the goings-on are either too simple or completely far fetched. Loius Andrews doesn’t leave a trail of breadcrumbs that we can either pick up immediately or look back, ponder and smile to ourselves. There are also minor plot threads that are introduced, but later not addressed (I’m thinking about the one where Prabhakaran has bugged the entirety of his neighbour’s apartment).

The first half twist is actually pretty entertaining. But as the director begins to shabbily answer his own questions in the second half, the movie becomes significantly less interesting. And the final twist — the much anticipated big reveal — is so contrived, ridiculous and frankly, superbly bland. All in all, Kolaigaran is alright. It’s the kind of movie that doesn’t make you angry, nor does it make you want to talk about it much afterwards either. It’s a decent enough time-killer, mostly because of the nature of its genre.