Rajinikanth and Kamal Hassan fans have taken to Twitter to express their disappointment in the actors fraternizing with alleged sexual predator and lyricist, Vairamuthu.

The three were seen at the unveiling of the late K Balachander’s statue at Kamal Hassan’s new office in Alwarpet. 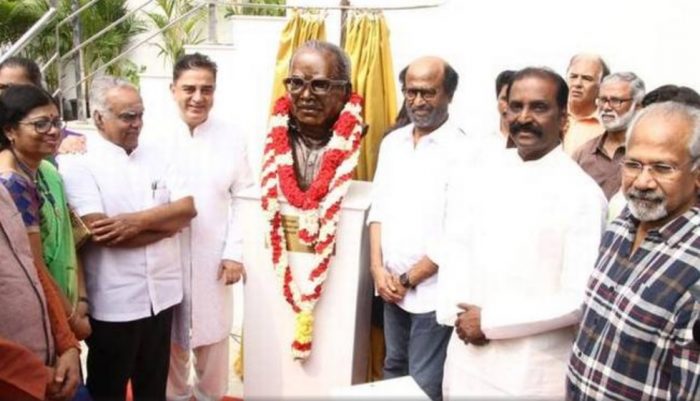 Pictures have been circulating on social media of the lyricist, who has been hurled with numerous sexual harassment accusations, mingling with the who’s who of the Tamil film industry, namely Mani Ratnam, Ramesh Aravind and Nasser.

New #RKFI office opened in Chennai as @ikamalhaasan mingles with guests like @rajinikanth and @vairamuthu pic.twitter.com/tgYov1rJY9

To this day, Vairamuthu has not responded to any of the sexual harassment allegations, nor mentioned the alleged crimes in any interview.

Shame on @ikamalhaasan & @rajinikanth for sharing a stage with a molester… No point in talking about women safety in political propagandas and happily work and pose with a molester. Also @Suriya_offl (though you are not in this ceremony) & Maniratnam for still working with him.

This is seriously disappointing. I expected much better from @ikamalhaasan. @vairamuthu has been accused not by 1 or 2 but more than 8 women. How can anyone in their right mind have a normal relationship with him without a thought about the victims and help him go on as usual.

Vairamuthu even gave a speech at the event, where he thanked directors Bharathiraja and Balachander for his successful four-decade-long career.

What kinda clout does #Vairamuthu have, to sit up on this stage with these top people, after all the #metoo allegations against him? This is beyond baffling at this point.

The presence of the lyricist at the event raises a big question, does Vairamuthu hold that much clout in the industry that these big names could not have conducted the event without him? More importantly, did the many accounts of alleged sexual abuse by him fall on deaf ears?

The event was organized by actor turned politician Kamal Hassan. Interestingly, when the #MeToo movement was at its peak a year ago, Kamal supported the campaign, and he was quoted saying, “As a society, we need to provide a safe atmosphere for women. And that lies in the hands of men.”

This isn’t the first time both stars, or other industry players have been seen mingling with Vairamuthu. The lyricist who has been accused of at least 8 incidents of sexual harassment last year, recently worked on actor Suriya’s film, Kaappaan, released two months ago. He is also working on Mani Ratnam’s upcoming blockbuster, Ponniyin Selvan