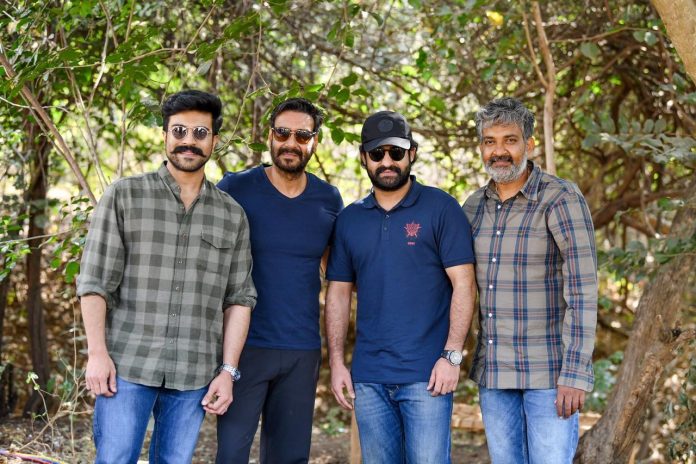 Actor Ajay Devgn has begun work on his next project —SS Rajamouli’s film, tentatively titled RRR. Two photos from the sets of RRR have been shared by the official Twitter handle of the film.

The message alongside the picture read, “The stars are shining bright on the sets of #RRR! @ajaydevgnji, @tarak9999, #RamCharan & @ssrajamouli from the shoot! #RRRMovie” In one of them, three stars from the film including Ram Charan and Jr NTR with Ajay pose together; while in another, all three of them pose with director Rajamouli.

The stars are shining bright on the sets of #RRR! @ajaydevgn ji, @tarak9999, #RamCharan & @ssrajamouli from the shoot! #RRRMovie pic.twitter.com/GAOy8Ohb3s

It is not clear what character Ajay plays in the film but he reportedly has an extended cameo in the film. RRR stars Ram, Jr NTR and Alia Bhatt as its lead cast, and Alia has been paired with Ram. NTR is likely to be paired with a non-Indian actor.

While little is known about the film’s storyline, it is reportedly based on the life of two Telugu revolutionaries, Komaram Bheem and Alluri Sitaram Raju, who will feature in the flashback portion of the film. The makers have already shot considerable portions of the film, with one schedule taking place in Rajasthan and another in Bulgaria.

The film is being made at a reported budget of Rs 300 crores. It will be Rajamouli’s first release post the release of Baahubali 2: The Conclusion which hit the screens in 2017. The Baahubali franchise is one of the most successful films to have emerged in recent times.