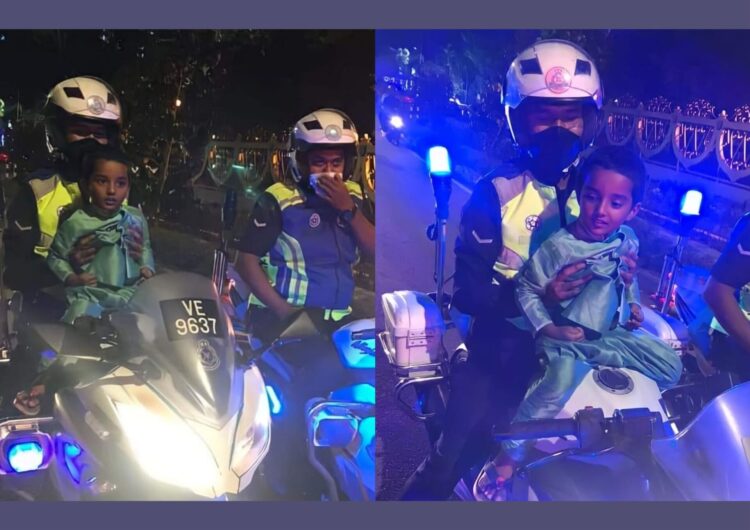 Recently, a post went viral on social media and the hearts of folks melted after witnessing a lovely interaction between a little boy and two cops.

A 3-year-old had his wish granted when two police officers on patrolling duty offered the little kid to sit on their motorcycles. The officers also received tremendous praise from everyone for fulfilling the kid’s cute wish!

Paramyesh Ben shared this beautiful interaction on her Facebook page. She said her little son, Yeshwaanth was eagerly looking at the PDRM patrolling unit passing by.

Paramyesh noted, “Last week, he saw police motorbikes with their sirens on at a petrol station and said, ‘Amma, Amma! Police motorbikes! I want to sit!.”

Despite the fact that she had told him he couldn’t, one of the policemen approached them.

She added she was surprised when the policeman approached and talked and even offered the little kid to sit on their motorbike. Another video shows the little boy climbing back into his father’s arms and fluttering cute-little kisses to the cops as they left.

Many netizens were swept over by the sweet encounter;

Special thanks to the PDRM officers for being such amazing gentlemen and giving the young boy a time of his life!

3 days later, Paramyesh Ben posted on her Facebook a picture of Yeshwaanth carried by a policeman saying “Meet up with his police friend again,”. (How adorable is that!)