The Significance Of These 4 Vedas In Hindu Scriptures

Vedas are Hindu scriptures. Vedic literature is regarded as one of the biggest values in ancient Indian culture.

The concept and ritual of the Vedic tradition are codified by the Vedas and thus shape the foundation of traditional Hinduism.

Veda is a Sanskrit word which literally means knowledge.

There are four types of Vedas, they are Rigveda, Samaveda, Yajurveda, and Atharvaveda.

The oldest Veda in the country is Rigveda. It has 1028 hymns named Suktas and it is a set of 10 books labeled ‘Mandalas’ (a cosmic diagram). It is the oldest form of Veda and the oldest documented text in Vedic Sanskrit (1800–1100 BCE). The meaning of the word Rigveda is praise knowledge.

It has 10,600 verses. Out of 10 books or mandalas, book number 1 and 10 were published at a later date. Rigvedic books 2-9 deal with cosmology and spirits. Rigvedic books 1 and 10 deal with theological issues and even address the various values and roles of charity in society. Rigvedic Books 2-7 are the latest and shortest family novels.

Rigvedic books 1 and 10 are latest publications. 1028 Hymns deal with deities like Agni, Indra and are credited and devoted to guru rishi. The ninth Rigvedic book/mandala is devoted exclusively to Soma. The meters used to form hymns are Gayatri, Anushtubh, Trishtubh, and Jagati (most significant are Trishtubh and Gayatri).

Known as the Veda with melodies and poems, Samaveda dates back to 1200-800 BCE. This Veda is attributed to general worship. There are 1549 verses (except 75 verses, all of which have been taken from Rigveda).

There are two Upanishads found in Samaveda, Chandogya Upanishad, and Kena Upanishad. The Samaveda is known to be the origin of Indian classical music and dance.

It is known to be the storehouse of melodious music. While it has fewer verses than Rigveda, its texts are broader. There are three recensions in the Samaveda text, which are Kauthuma, Ra Ayaniya, and Jaimaniya. Samaveda is divided into two sections.

Part 1 contains musical melodies Gana & Section 2 incorporates three parts of the text named Archika. Samaveda Samhita is not supposed to be interpreted as a text, it’s like a musical score sheet that needs to be understood. 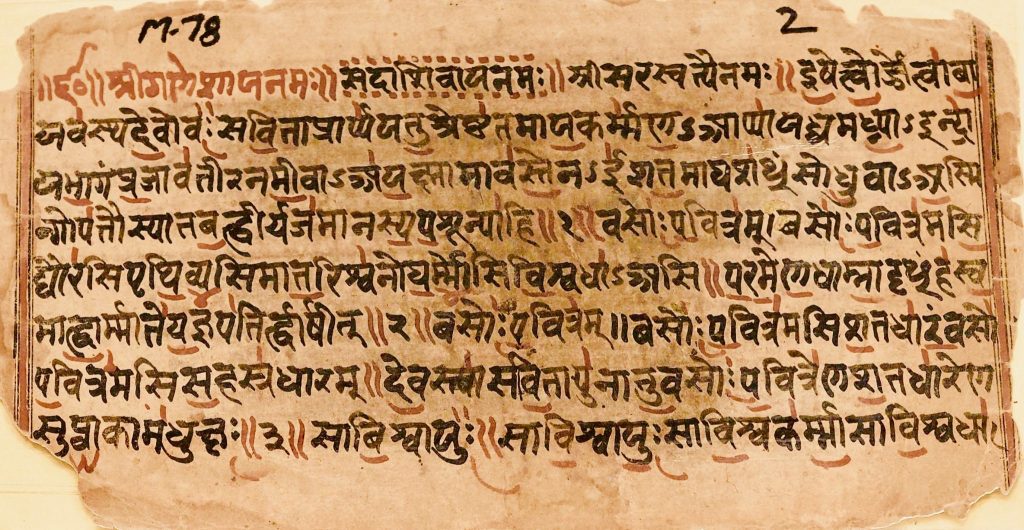 The sense of worship knowledge is that Yajurveda dates back to 1100-800 BCE similar to Samaveda. Yajurveda compiles mantras and chanting rituals. These songs were provided by the priest alongside an individual who used to conduct a ritual (in most cases, a yajna fire). It has two types of mantras, Krishna (Black/Dark) and Shukla (White/Bright).

The oldest sheet of Yajurveda has 1875 verses mainly taken from Rigveda. The middle layer of the Veda has Satapatha Brahmana (sacred texts), which is Shukla Yajurveda’s commentary.

Vajasaney Samhita is the Samhita of Shukla Yajurveda. There are four remaining recensions of Krishna Yajurveda  which are  Taittiriya Samhita, Maitrayani Samhita, Kaṭha Samhita, and Kapisthala Samhita.

This veda stands for the tatpurusha combination of Atharvan, the ancient shaman, and wisdom (atharvan + knowledge), which dates back to 1000-800 BCE. The daily aspects of life are very well described in this Veda.

Atharvaveda has 730 hymns, 600 mantras, and 20 books. Paippalada and Saunakiya are two recensions of Atharvaveda. Called the Veda of Magic Formulas, it contains three main Upanishads, they are Mundaka Upanishad, Mandukya Upanishad, and Prashna Upanishad.

The 20 books are divided according to the duration of the hymns they contain. Unlike Samaveda, where the hymns are copied from Rigveda, the hymns of Atharvaveda are original save for a handful.

This Veda contains hymns many of which were charms and magic spells which are meant to be pronounced by the person who seeks some benefit, or more often by a sorcerer who would say it on his or her behalf.

The Vedas, in specific the Upanishads, will gradually establish the fundamental conception of the Sanatan Dharma and have guidance and meaning in the lives of the believers. It came to be known that there was a single entity, Brahman, which not only produced life but rendered creation itself.

Since this became too powerful to be known by human beings, it manifested as avatars such as Brahma (the creator), Vishnu (the preserver), and Shiva (the destroyer), as well as a number of other deities, all of whom were actually Brahman.

The purpose of human life is to realise one’s higher self (Atman) and fulfil the dharma (duty) granted to one with the correct karma (action) in order to liberate one’s self from the process of rebirth and death (samsara) marked by the pain and loss endured in the physical world.

To conclude, Vedas carry a great significance in our daily life and understanding of Hinduism.

Almost every month in the Tamil calendar, a significant auspicious day is always present, and spiritual practises such as Puja...

Thursdays With Sadhguru; What is True Love? (PART 2)

We continue last week's discussion of Sadhguru's wisdom on 'True Love.' This deeper understanding of 'True Love' is essential as...

To celebrate joyous occasions such as Malaysia Day, local musicians have come out with brand new patriotic songs that are...

When we think of Krishna, the first thing that comes to mind is Radha. She is the gopi (milkmaid) who...