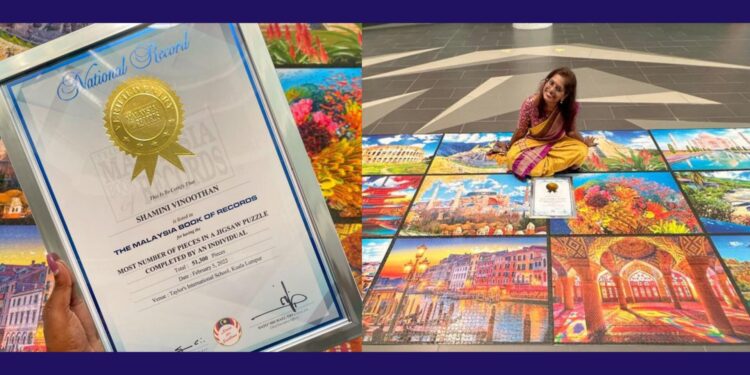 Completing a jigsaw puzzle may be time-consuming, and some people will give up halfway through but solving puzzles give you a sense of accomplishment when you finish them in a certain amount of time.

Meet Shamini Vinoothan, who smashed her own jigsaw puzzle record.

On February 5th, the puzzling prowess had beaten her own record and earned a spot in the Malaysia Book of Records for having the Most Number of Jigsaw Puzzles Completed By An Individual, with a total of 51,300 pieces completed in only 6 months. (How amazing is that!)

Prior to this record, she set the record for the same category last year on March 12th, with a total of 18,000 puzzle pieces in only 9 months.

In a conversation with Varnam, she was incredibly happy about her accomplishment since she had no idea she was capable of finishing 51,300 pieces in such a short period of time. The puzzle prodigy said her adventure in the puzzle world began when she was four years old.

Hailing from Klang, Shamini said, “This passion which I had at an early age prompted me to plunge into attempting to work on 1000 and 2000 piece puzzles.”

The mother of one revealed that she has discovered some skills that help her accomplish small and large-scaled puzzles in a short amount of time, and that in the future she would like to control and monitor the timing of assembling the puzzles into one picture.

The grad who has a Masters in Teaching and Learning and currently working as a teacher at an International School said that time management was difficult for her since she has continuous responsibilities as a mother, teacher, and student. (She was pursuing her Masters degree at the time of the first National Record attempt)

“Balancing my time between these and my hobbies is tough. But I try to find at least 10 to 30 minutes every day to solve puzzles since they help me relax and are a stress buster for me “she explained.

“My mother, who single-handedly raised me and my siblings since I was two years old, has been the major pillar of support for me throughout my adventure with puzzle making,” she says.

“She bought me puzzles and once I’ve completed, she had them hung on the wall. This pushed me to do more puzzles, which has now earned me a National Record,” she expressed.

“Next, my husband, Vinoothan, is the one who encouraged me to attempt for the Malaysia Book of Records and also supported me in and out by giving me the space and time to execute these huge-scaled puzzles,” she said.

After accomplishing this feat, this dedicated lady decided to take a break from big puzzles and is now ready to dive into the market’s challenging jigsaw puzzles.

“Recently, I finished the black hell puzzle that has 300 jigsaw pieces which have no visuals but just black puzzles. It has to be merged based on the pattern and shapes,” she stated.

Wishing Shamini the best of luck in future puzzle championships.

Congratulations and all the best in your future endeavours!