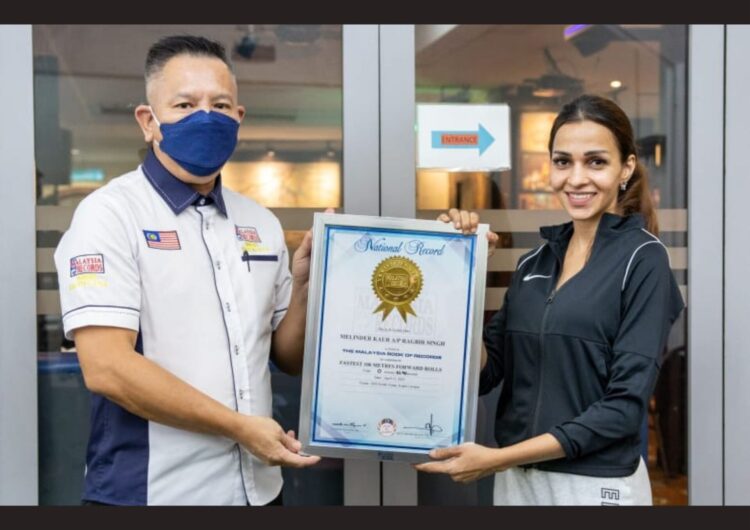 Do you need some motivation to get your day started? Then this article will undoubtedly encourage and boost you to achieve your goals.

Recently, our former national athlete Melinder Kaur earned a spot in the Malaysia Book of Records by achieving a remarkable feat after performing a 100-metre forward-roll clocking in just 52.40 seconds, the fastest woman to do so. This record was performed at SSU Kelab Aman field on the 15th of April 2022.

What is more fascinating is that she was just a short of 10 seconds away from the Guinness World Records carried by Bethany Lodge (42.64 seconds).

Speaking to Varnam, this 34-year-old said she pursued for a record with the sole purpose of helping the underprivileged, orphaned and neglected kids in our country by channeling all her sponsorship for the record attempt as a form of donation.

Melinder said during the 1 month training, the biggest struggle she faced was dizziness. Moreover, forward-rolling has a high risk of head, neck and spinal cord injury.

However, this did not deter Melinder from pursuing her goal. In each training session, she never fails to refine her technique and strives to move faster.

She further explained that the idea of performing this forward-roll sparked in her when she discovered it was a fun to do sport while she was serving in the military as forward-roll was part of their daily training routine.

“I’m so thankful to the Malaysian Armed forces because I’ve learned so many skills while serving in the military and all of these can be used for my next record attempt,” the mother of one expressed.

The Penangnite who is currently residing in Kuala Lumpur is also a double National Record Holder. “My 1st record was the 3000m steeplechase which I have broken 4 times while I was in the national team and until today,” she mentioned.

It’s been 13 years and her record is still standing strong and unbreakable.

Achieving this astounding accomplishment, she said: “I’m happy with my pace, but hoping to improve more on my endurance, strength and skills,”

“I’m blessed to have a supportive husband who always pushes me to do things I’m not certain I’m capable of. Besides that, my friends are amazing. During my training session, they were extremely helpful and motivating,” Melinder continues.

Talking about her future plans, she added hopeful: “l still see room for improvement and plan to train hard to break the world record for the fastest 100m forward-roll and also I’m eyeing up some other fitness records to attempt next.”

Congratulations Melinder for this huge achievement and all the best for your forthcoming endeavours!