Malaysians too have frequented the joint in support of the chef and his crew.

After an ordeal that left the owner of eatery Rata Subang in distress over what can presumably be seen as an unreasonable compound issued by Subang Jaya City Council (MBSJ), local celebrities and fellow Malaysians have come out to show support to the owner Vicneswara Thenamirtham, also known as Chef Vic in hopes to revive his business once again.

Chef Vic and his staff members are all smiles now. Rata Subang’s Instagram page followers has increased tremendously over the span of three days. Malaysian celebrities such as Balan Kash, Roshan, Stylomannavan and the very famous Chef Wan have given full support by sharing a viral video made by Chef Vic detailing a compound that was issued by the local council last week.

Previously, Chef Vic posted an IGTV video in which he urged people to support small businesses during these difficult times after his famous Subang eatery was given a heavy compound.

But what’s the backstory of this video that became viral on Instagram? MBSJ enforcement officers imposed the famous eatery with a RM10,000 compound on Friday night, June 25th, for allegedly remaining open for business past the 8pm cut-off time set by the government.

Local portal SAYS spoke with the owner of Rata Subang to learn more about the situation from his perspective. According to Vic, who also owns Big Brooklyn Pizza, their last order from Grab was at 7.30 pm. They do not accept orders after that time because it is their cut-off time.

However, the orders for that particular day were a little too large, and the kitchen, which only had four workers, only managed to finish by 8.15 pm. The orders were then placed on the table for riders to collect.

At 8.30 pm, though they had completed their orders, the cops and officers from MBSJ arrived and took issue with that.

When they noticed Rata’s lights were turned on, Vic explained that his staff was sweeping the floors, which cannot be done in the dark.

He tried to explain to the authorities that his last order was at 7.30pm and not later, and that preparing 15-20 orders with only four people in the kitchen would take a long time.

“Still, we were already shutting down and the outlet was in the midst of being cleaned. I asked them ‘what is the grace period?’, like ‘okay, if 8pm we close, we need to still clean the outlet, lock it, which all takes time.”

Vic told SAYS that it all seemed pointless seeing that they wouldn’t listen.

“The cops and the MBSJ officers also came in a big group, almost 20 of them,” he shared, adding that it was “extremely intimidating” and felt like they could cause a cluster themselves by their sheer number.

He said, “Literally 20 of them came into my restaurant and they weren’t even practising any form of social distancing. Nothing at all. And they wouldn’t listen to me no matter how much I begged.”

“They came, issued the compound, and left.”

“I would have understood if they caught me operating beyond 8pm by taking orders. Say, I had a receipt saying there was a new order at 8.10pm, then if they compound me, it would have been my fault and I would have accepted it. But no, that night my last order was 7.30pm and I’ve the documents to prove it.”

Following the events of Friday night, Vic stated that they have been overwhelmed by the outpouring of love and support from everyone.

“All our regular and loyal customers have shown an incredible amount of response. Our Saturday sales were really good. A lot of new customers also came in due to so many celebrities sharing the video on their pages. All in all, Muslims and non-Muslims, everybody is showing love and support.”

Vic also stated that they will not accept donations from anyone.

They can simply lend a hand by ordering food from his restaurant. Now that the operating hours for restaurants have been extended until 10 pm, not only his, but also other eateries, can operate with greater ease. 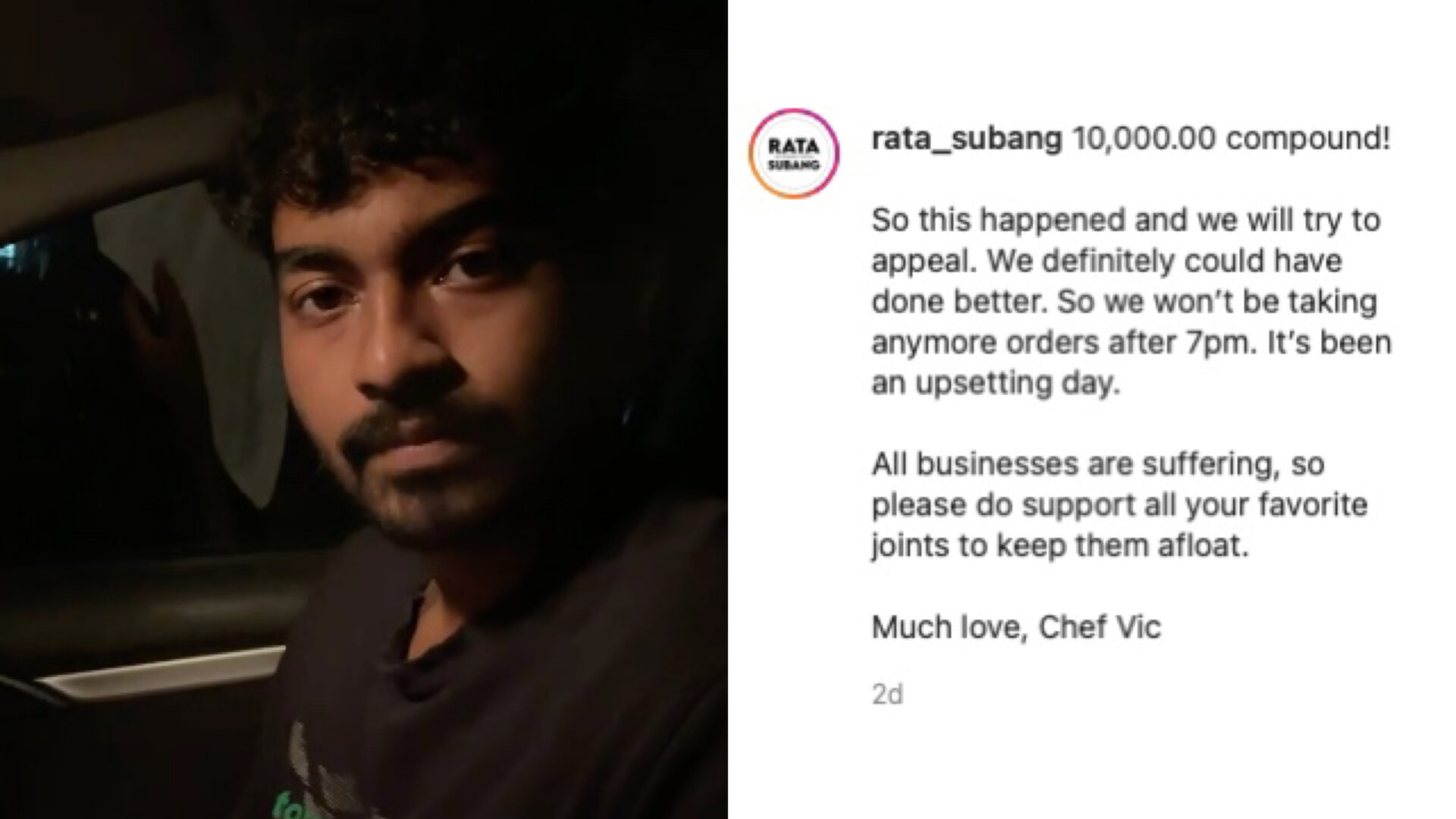 Judging from his reasoning, the council officers should have been more reasonable with the chef.

However, three days after the compound was issued to the restaurant owner, the government in a twist of events now allows restaurants to operate until 10pm. This is good news for food outlet owners, their staff and even average Malaysians, like us.

However, is this a fair move in relation to Rata Subang? Should the compound be waived? What’s your take on the matter?