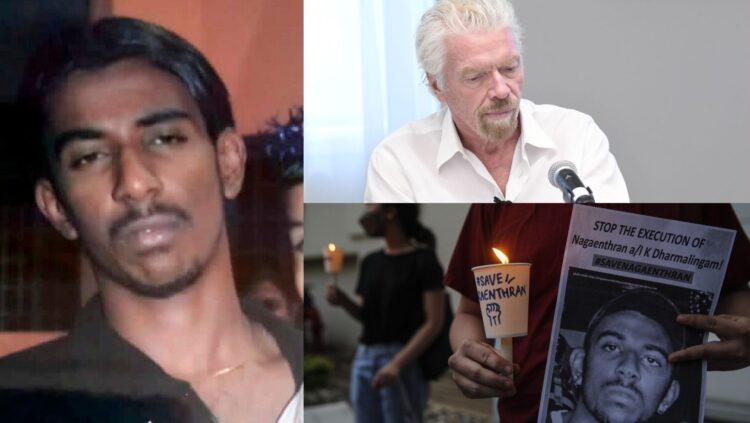 If Singapore is still stubborn and insists on a death penalty for a mentally challenged young man on drug charges, it will be in violation of international laws.

A last-ditch campaign to spare Nagaenthran Dharmalingam, who has an IQ of 69, from death has resulted in a stay of execution two days before Singapore was scheduled to execute him. The court delays execution for the 33-year-old Malaysian drug trafficker Nagaenthran K. Dharmalingam after he tested positive for COVID-19.

His execution was initially scheduled on Wednesday morning but was granted a last-minute stay of execution. Yesterday (Tuesday, 9th November) after he tested positive for COVID-19. Hence, the Singapore High Court has granted to hold the execution till he recovers.

Despite a medical expert’s determination that he has an IQ of 69, a threshold recognised as showing his intellectual incapacity, the Malaysian citizen was condemned to death.  To date, more than 60,000 individuals have signed a petition under  #NagaenthranDharmalingam by urging Singapore’s President Halimah Yacob to pardon Nagaenthran, citing international human rights legislation that prohibits the execution of mentally ill persons.

If Singaporean courts get their way an intellectually disabled 33-year-old man from Malaysia will be hanged on Wednesday.

Dear Mr @leehsienloong, I respectfully ask you& @govsingapore to grant clemency to #NagaenthranDharmalingam due to be hanged.His #IQ is 69; this used to be categorised as "definite feeble-mindedness" & "moron"- was he REALLY able to understand his actions?https://t.co/zKHcaSDslq

As an engineer, when we see a defect in a machine or product, we don't just throw the machine or the product but we will find the root cause to treat the defect to prevent a recurrence.
#NagaenthranDharmalingam

Singapore court on Tuesday stays the execution of #NagaenthranDharmalingam , a Malaysian convicted of drug smuggling for reasons of "common sense and humanity" after confirming he had tested positive for COVID-19, a day before he was due to be hanged. pic.twitter.com/qTs5wmhGRh

“It is completely disheartening that an intellectually disabled man is being punished for a non-violent crime,” said one person who signed the petition. “Neither he nor his family deserve this pain. Please save him.”

The movement has garnered attention on social media, where there is an unusual outpouring of anger and sympathy. In 2009, Nagaenthran was caught crossing into Singapore from Malaysia with 43g (1.5oz) heroin strapped onto his left thigh. According to Singapore’s laws, those caught carrying more than 15g of heroin will be subject to the death penalty.

The new amendment enabled Nagaenthran, who became a courier for another person, to oppose his death on the grounds that he suffered from an “abnormality of the mind.” Nagaenthran moved for a re-sentencing hearing, and the court heard evidence indicating Nagaenthran had borderline IQ, weak executive functioning abilities, ADHD, and an alcohol use problem. Unfortunately, the court determined that this did not meet their legal culpability requirement of “mental aberration.”

While three other psychiatrists told the court that Nagaenthran was not intellectually disabled, one found that his “borderline intelligence may have contributed towards his… agreeing to carry out the offence”.

In the end, the court found that he was not intellectually disabled. A final push for presidential clemency was also rejected last year. Additionally, Nagaenthran’s case has sparked international outrage, albeit with British Virgin chief Richard Branson appealing for mercy. The Virgin group founder often speaks out against the death sentence and also stated that the case highlighted the fatal flaws of the death penalty.

“I join many others who are worried about this unfortunate situation in urging Singapore’s President Halimah Yacob to invoke her pardoning powers and save Nagaenthran’s life.” It’d be the right and fair thing to do.

All offences must be punished by a fair and impartial legal system. The death penalty can exacerbate issues and do more harm than it prevents in the first place. Let’s hope and pray that Nagaenthran will be pardoned based on legitimate grounds.