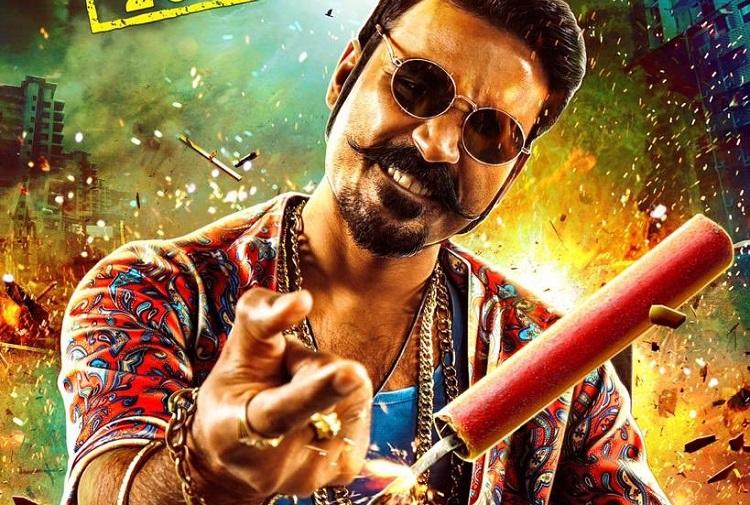 I’ve spent the better part of the past three years engaging in lengthy debates and great Twitter battles defending Maari against its many naysayers who brush it off as a mind-numbing, throwaway mass entertainer. (It is a mass entertainer — a hella good one — but throwaway and mind-numbing, it is not.) The first Maari is an underrated gem. No, I’m not bullshitting you. It really is. I may also be literally the first human being on earth to call it ‘rather ingenious’.

Because underneath its so-called mindless, whistle-worthy surface is a film so self aware, so unpretentious, so uninterested in making gratuitous political statements and educating the masses (i.e Sivaji: The Boss and *barf* Sarkar), so unbothered to make its hero a wholesome saviour, it’s frankly one of the most invigorating mass-masalas to come out since there was a 21st century.

Just like Thor: Ragnarok, this Balaji Mohan film is an exciting subversion of tropes. And more importantly, it’s a movie that knows what it is — a ridiculous, larger than life, gangster-dramedy — and focuses all its energy on being exactly that. Not an inch more, not a slither less.

With Maari 2, Balaji Mohan who returns to captain the ship makes things bigger and more complex, as a lot of sequels tend to do. Unfortunately, there’s a saying that goes bigger isn’t always better and the film drowns under its ambition. But I’m getting a little ahead of myself here. The first half of Maari 2 is entertaining as all hell and within minutes I was reminded of exactly why I watch the first movie over and over again.

We get a bombastic, mass-y set piece — where a little boy comically talks down to a local thug — that reintroduces us to the loveable don Maari (and his two trusty friends, Saturday [Robo Shankar] and Punching Bag [Kalloori Vinoth]). The world in which they reside in, just as vibrant and over the top as it was in 2015. Equally over the top is the introduction of the new villain, Beeja (Tovino Thomas), who wears his dreadlocks like Lil Wayne and calls himself Thanatos, The God of Death.

And just as he prison-breaks, the camera zooms in on his prison cell where the words KILL MAARI is scratched all over its walls. It’s kinda ridiculous. We also meet Maari’s retconned brother from another mother, Kalai (Krishna Kulasekaran), the son of the highly respected gangster/smuggler, Velu, from the first movie, who has since died. Then there’s Sai Pallavi’s character, who I’ll get to later. The snappy and energetic first half sets up a story about two brothers being manipulated and wedged apart by a villain with a score to settle. Dhanush and Krishna Kulasekaran have such good chemistry that we’re invested in the narrative despite it being a tale we’ve seen, heard or read a million times before. The less charismatic Tovino Thomas need only stand and flash his metal tooth in the background. What Balaji Mohan does so well in the first movie and the first half of Maari 2 is also craft some grounded (if we can even call it that) and emotionally resonant mass-y sequences and fit it nicely within the general ridiculousness of the Maari universe.

Just consider the way Maari yells at the Vijay Yesudas character for the very first time in episode 1, and the way in this sequel, Maari — agitated, furious, confused and controlled — tells his best friend to hit him. That it doesn’t feel remotely weird that this is also the film where the lead character says “If you are bad, I am your dad” while raising his eyebrows and peering from above his sunglasses tells you everything you need to know about this world that Balaji Mohan has created. 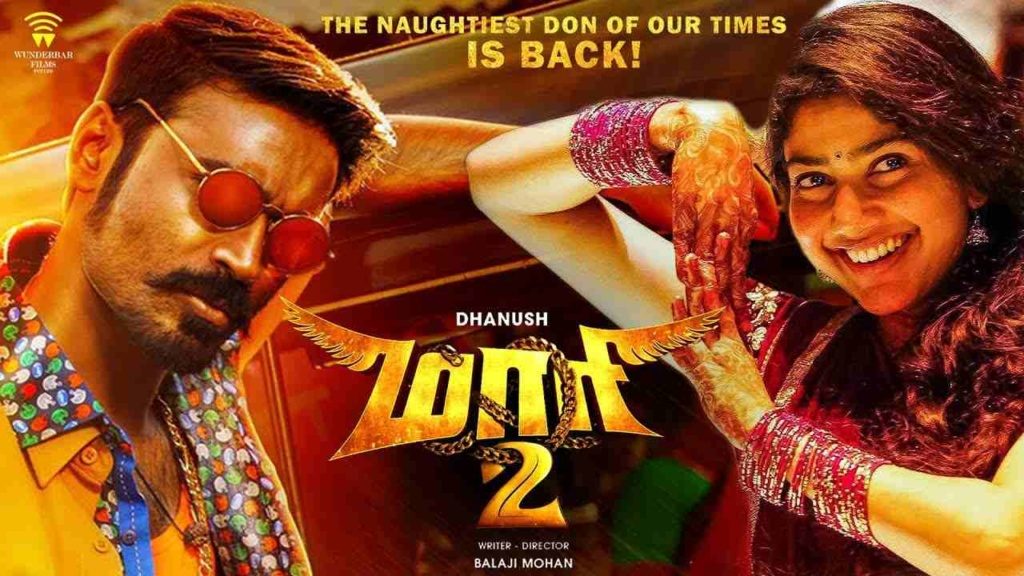 It’s when the film cuts to 8 years later after the midpoint interval that it goes south DRAMATICALLY. Suddenly there’s a shift in tone and characters suffer harrowing ordeals. The movie demands that you take it seriously. But the issue isn’t necessarily with its seriousness — I admire Balaji Mohan’s boldness in choosing to take the movie down a slightly darker path. The issue is that Maari 2 becomes a different product entirely. All of a sudden Maari morphs into a weird reimagination of Baashha / crime not-thriller.

But unlike the 90s Rajinikanth classic, here the calm before the storm (or the tame before the MASS, if you will) falls Chapati flat, leaving us desperate for the film to revert back to its OTT template. Even the mass scenes, when they come, happen inorganically without proper buildup or escalating conflict. (Though, there is one scene involving Maari, his son, Beeja and a tiger analogy that’ll get your juices flowing and cheer ecstatically.)

And I think ‘escalating conflict’ is the key phrase here. Because frankly, the second half isn’t even about Maari. It’s about the villain who has now become a politician. And it’s about an IAS officer (Varalaxmi Sarathkumar) scheming and plotting to take down the villain. It’s also about corrupt police officers. Maari sorta becomes a supporting character in his own movie. Even the engaging brotherhood and betrayal angle is casually swept under the rug.

To make matters worse, none of what we actually get makes any sense whatsoever. There are twists and turns, revelations and reveals, most of which are stupid, none of which you give a shit about. And I was sitting there wondering how this blast of a movie spiralled into a convoluted head scratcher. Urgh! Can we just have Maari throw firecrackers at bad guys again? That said, this movie still sorta kinda works… to a degree. And that’s because swimming through Balaji Mohan’s mess of a screenplay and poorly paced, choppy direction are a couple of intoxicating performances that keep the boat afloat and make this a watchable movie. First up is Dhanush. I’ve said it a couple of times before, I’ll say it again. Rajinikanth is my childhood and for that reason more than anything else, he will always remain my numero uno. But coming in at a very close second is Dhanush, who’s one of the best actors working in world cinema today. An enigma that is exceptional both when it comes to dramatic roles (3, Aadukalam, Vada Chennai) and mass-y ones too (VIP, Maari, Kodi). Here, he’s once again firing on all cylinders.

Maari 2, just like its predecessor may be a throwaway mass movie, but Dhanush doesn’t treat it as such. He acts his heart out and delivers a layered performance. The scene where he challenges his best friend to hit him is spine-chilling (there’s a sense of believability and genuineness about his rage). But to truly understand what a great ACTEUR Dhanush truly is, you need to look at the scene where he isn’t exactly the centre of attention. Where he’s merely listening to a conversation between his son and Beema. His minute twitches and later his smirk — with Dhanush, it isn’t just acting, it’s also reacting.

There’s also his overwhelming charisma (and fantastic comedic timing), second in South Indian cinema only to THE superstar himself, Rajinikanth. Yes, even Thala and Thalapathy, do not come close. I know the box office numbers say otherwise. Then again, box office numbers are also the most uninteresting aspect of cinema.

Also great: Sai Pallavi. I think sometimes in Tamil cinema, we tend to throw around the term ‘great actress’ a little too easily. In recent years, both Nayanthara and Trisha have been labelled as ‘great actresses’. But I think we’ve been so taken aback and impressed by the type of characters they’ve been playing — independent, anti-damsels in distress — that we tend to be less critical when it comes to their performances. But what Sai Pallavi does here as auto-driver Anandhi is deliver a stirring and inspiring performance that will be (or at least should be) talked about for a very long time.

Unlike Kajal Agarwal’s angellike arm candy character in the first movie, Sai Pallavi’s Anandhi is perhaps Tamil cinema’s most progressive character this year, maybe even more so than Aishwarya Rajesh’s Padma in Vada Chennai. She’s fun, spunky and isn’t afraid to pursue what she wants. She even has a line that rings “I’m not a loosu ponnu, I’m a mass-u ponnu,” which received rousing whistles from the audience. But that’s Balaji Mohan’s writing. 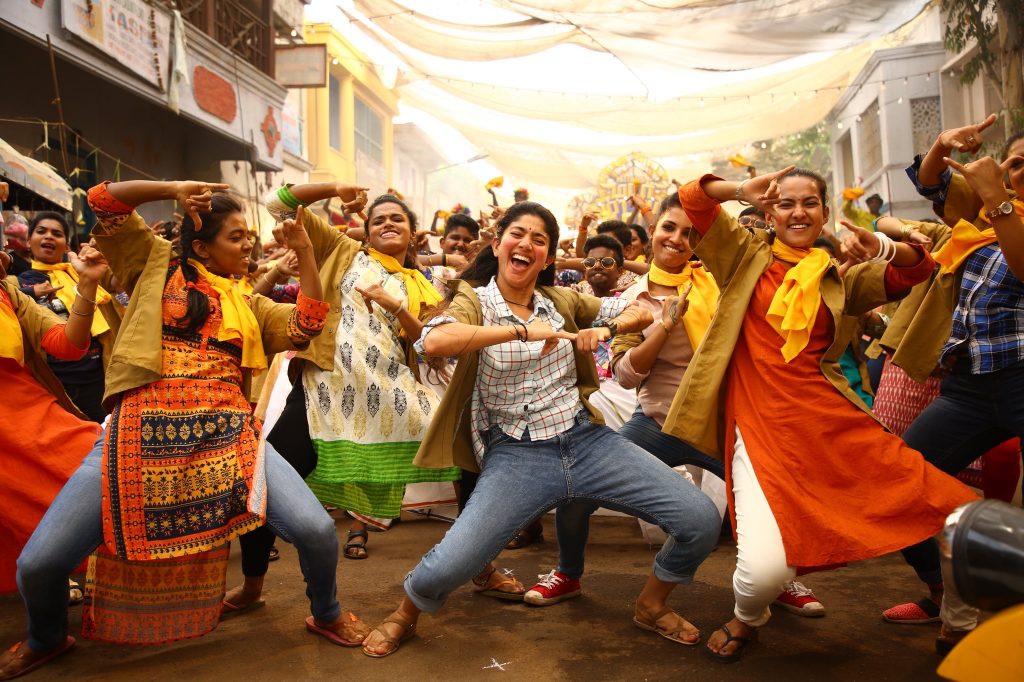 As a performer, Sai Pallavi, just like Dhanush is a bonafide STAR. On display we see an actor so intuned with her character, so natural and clearly having a lot fun on set, that I fell in love with her faster than you can say rowdy baby. Sai Pallavi is absolutely infectious! When she smiles, you smile; when she cries, you cry. She’s a fantastic dancer too. Just look at the way she moves in the film’s brilliantly composed (by Yuvan Shankar Raja) and choreographed first dance number, Maari Gethu.

If Maari was Coca-Cola then Maari 2 is King Cola. But here’s the thing about King Cola: It’s not too bad. I won’t rush out to buy King Cola, but if it’s served at a party, I’m going to be fine drinking it all the same. There are parts in Maari 2 that are great. The comedy is just as smart as in the first movie (and Robo Shankar is once again a riot). The characters are just as joyous. Yuvan Shankar Raja’s tracks are almost as addictive as Anirudh’s, and that’s high praise where I’m from. The film is also gorgeously shot by cinematographer Om Prakash. But man, does Balaji Mohan lose his bearing big time in the second half.

If you’d like to discuss this movie with me you can hit me up on Twitter here: @dashtalksmovies