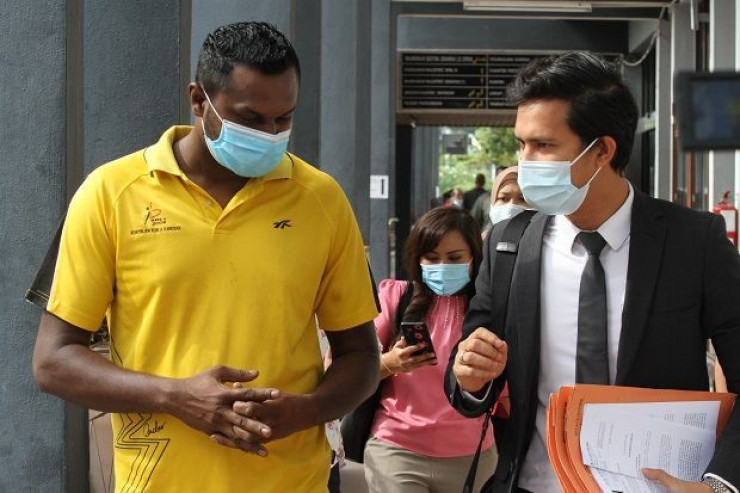 Sugu, the husband of the famous cooking sensation YouTuber, Pavithra was spared a prison sentence today after the Sessions Court in Ipoh issued a three-year good behaviour bond order for the possession of a dangerous weapon.

Sugu thanked the court for the lighter sentence.

Judge Norashima Khalid handed down the sentence to the convicted, M Sugu, who is also a farm worker with a collateral of RM8,000 with one surety in accordance with Section 294 of the Criminal Procedure Code.

He also ordered the accused to pay RM3,000 for the prosecution costs.

Earlier, Sugu had changed his confession from innocent to guilty. He was accused of carrying a dangerous weapon, a 66cm sickle, with the words ‘Tiger’ written on it at the Raja Permaisuri Bainun Hospital Palliative Ward car park between 4 and 6 pm on 21st July 2020.

On 24th July, Sugu pleaded not guilty to the charge and his party submitted an application for representation to the prosecution before being dismissed by the Ipoh Sessions Court last October.

On 17th September 2020, the Ipoh Sessions Court cleared Sugu without any charge of injuring Pavithra, 28, at the time of the incident, after his wife had taken the oath of voluntarily withdrawing the charge without any pressure and intimidation from any party.

Now, the accused is convicted under Section 6(1) of the Corrosive and Explosive and Dangerous Weapons Act 1958, which provides for a jail sentence of not less than five years and a term not exceeding 10 years.

Previously, lawyers Mohamad Hafiz Jalaludin and Syahrul Nizam Mohd Rabi, who represented the accused, asked the court to impose a bond of good behaviour, keeping in mind that the accused had never been involved in criminal or gangster cases before, and vowed not to repeat the offence.

Mohamad Hafiz said that the entire case was due to misunderstanding and that his client, Sugu had an obligation to provide and care for his two young children.

“The initial confession (to plead guilty) today has saved time and cost, whilst taking account the recognition given for its success until receiving the’ Ipoh City Icon award’,” he said.

Deputy Public Prosecutor Liyana Zawani Mohd Radzi, who is in charge of the case, suggested that the court should cover the expenses of the prosecution after a thorough investigation by the authorities.