Industry giants like Netflix, Amazon Prime Video and Disney+Hotstar have helped us to gloriously transition into the world of OTT when the viability was nowhere close to us in this region to return to the theatrical experience thanks to the pandemic that is still hovering amidst us. The rise of such services is a testament to a growing audience who are now, more than ever want to stay apprised in the digital era and willing to indulge in more progressive content.

Joining the market players is none other than the well-known Director in Kollywood Venkat Prabhu,  A well-known film-maker in the South Indian film industry and known for making blockbusters such as Chennai 600028, Mankatha, Saroja and others; which us as the audience are still able to resonate; has now taken his passion for cinema a step further by launching a new OTT platform called BlackTicketCinemas.com.   This brainchild of Venkat Prabhu was developed by Hangover Media Technologies Pvt. Ltd. and is available at www.blackticketcinemas.com as well as the Google Play Store. 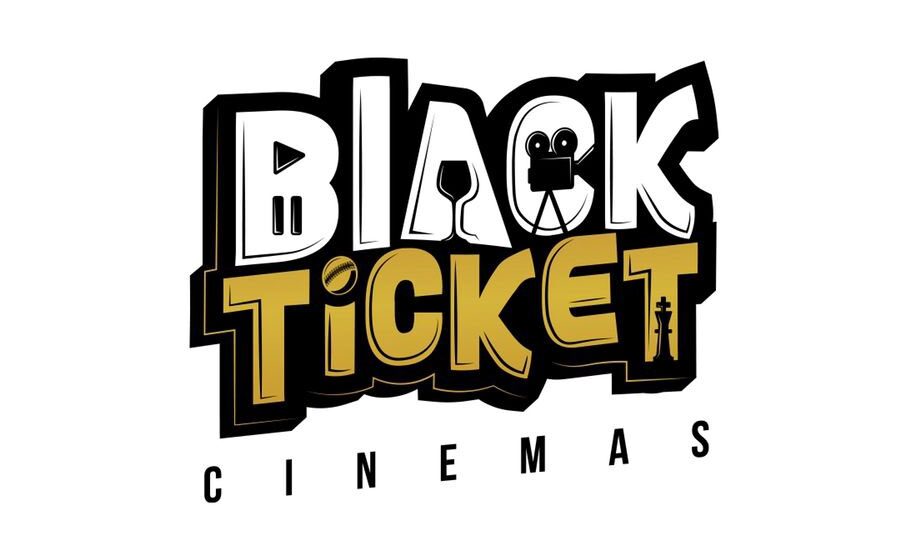 Black Ticket Cinemas will be the world’s premier streaming video service, with a pay-as-you-go model that will almost single-handedly change the way people consume modern-day entertainment. 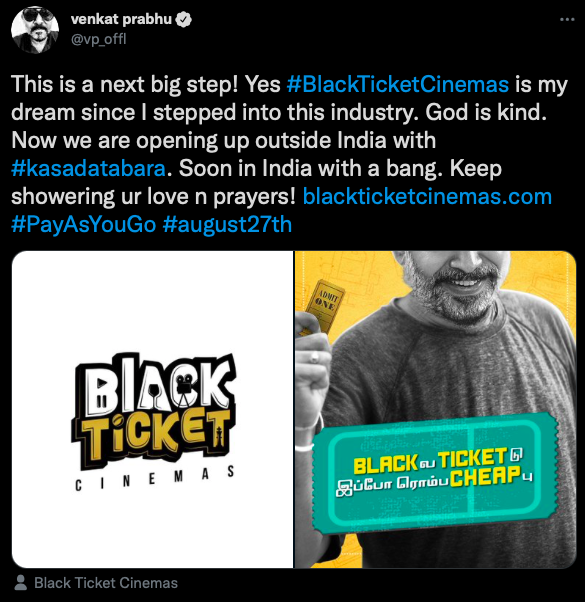 Varnam Malaysia had the privilege to have a candid interview session with the man himself – Venkat Prabhu on what inspired him to pursue this passion as his next career milestone. 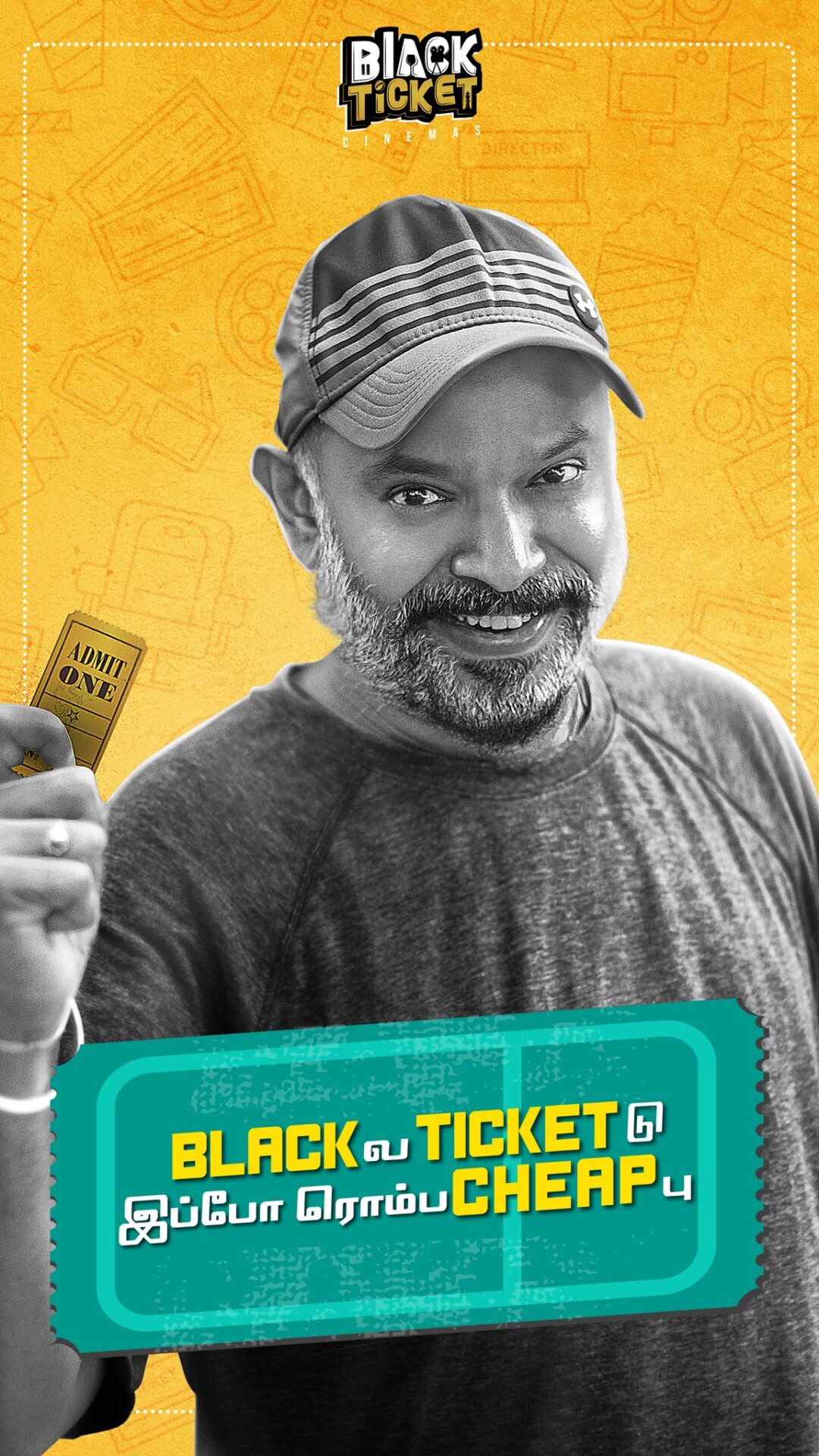 VP: What makes BTC unique is that, unlike other popular subscription-based OTT platforms, this is purely based on a no-subscription model. The app has been developed on a pay-per-view system which means one needs to just pay for the content selected. That said plenty of free content will be made available too. It offers worldwide access which will make it easy for Indian entertainment lovers to watch from anywhere- anytime. Digital events are getting bigger and turning out to be an alternative for live events, and this app offers plenty of such exciting events too. One can also enjoy concerts as music icons bring home the thrilling experience.

VM: Since OTT is based on PPV (pay per view), what is the validity period after a purchase is made? Is simultaneous streaming allowed? Any plans for a monthly subscription in future?

VP: No plans for a subscription base for now. Only PPV at RM12.99 and pre-book at RM9.99 will be made available for now. Validity is based on a 24 hour period but we may extend it to 48 hours in the near future.

VM: What is BTC’s strategy to attract subscribers? How do you see BTC streamlining and creating a space for itself amongst other big OTT players?

VP:  This digital platform delivers high-quality media content to devices, including a slew of films, exclusive music concerts, digital events, and other shows created specifically for this medium. In today’s fast-paced world and with the pandemic, the way people consume modern-day entertainment has changed drastically. We are different in terms of pricing and in terms of the whole look and feel as compared to a traditional streaming service platform. We have integrated a lot of studies on movie consumption by Indians all over the world and have decided to do the first launch with an overseas release of the movie Kasadathabara worldwide (excluding India). This is to reflect a globalisation effort and to create a more competitive edge outside the mass market in India.

VM: What are the possibilities of having Malaysian content on BTC?

VP: Definitely! We’re looking at working together with local movie producers. We want more localized content to be there as Malaysian directors have produced some noteworthy movies. We are looking at showcasing Malaysian Tamil movies to India too! 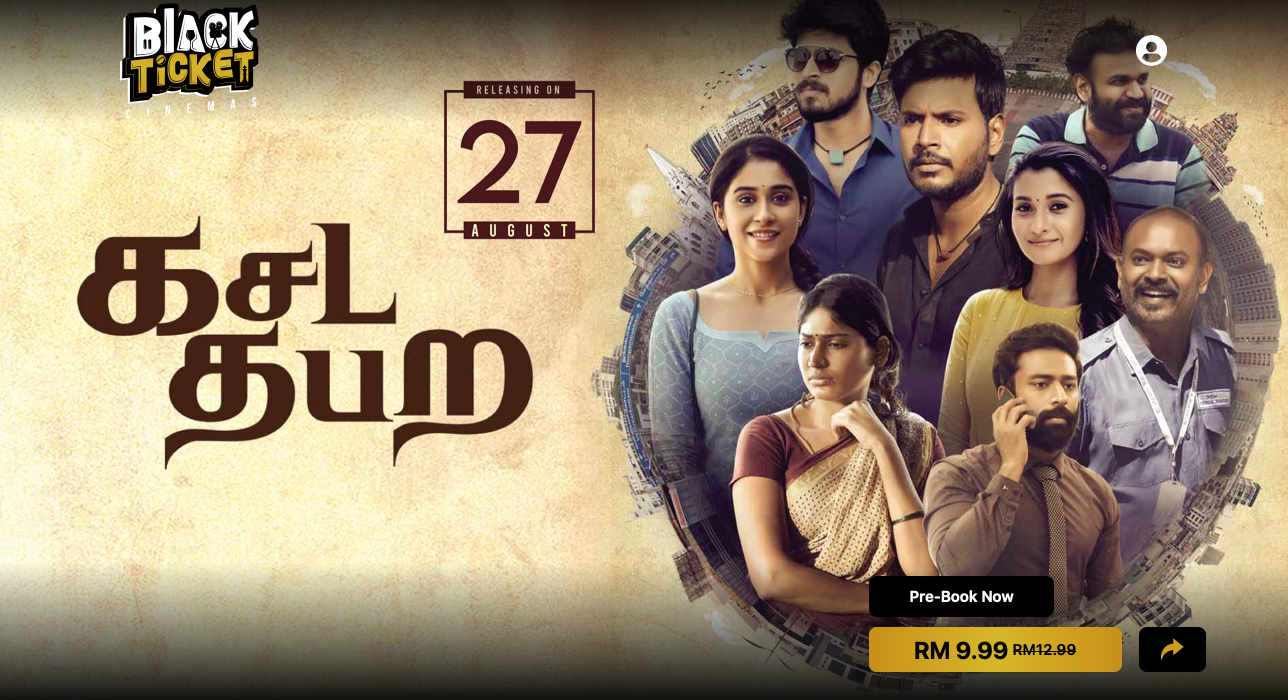 Kasadatabara, directed by Chimbu Deven, and staring Harris Kalyan, Shanthanu, Regina Cassandra, Premgi to name a few will be the first film to be streamed on the platform by Black Ticket Cinema. This film is set to premiere on August 27th 2021 and will be available in Malaysia & Singapore from 2.30 pm onwards today and is also made available to other international audiences via Black Ticket Cinemas official site. You can now pre-purchase your tickets for RM9.99 instead of RM12.99.

Any Yuvan fans here? Then you’re in luck because this platform will be premiering Yuvan Shankar Raja’s concert soon. This is definitely going to be lit!

Black Ticket Cinemas has the distinction of becoming the world’s premier streaming video service using a pay as you go method. This digital platform brings quality media content to devices which will include a host of films, exclusive music concerts, digital events and other shows specifically created for this medium. What distinguishes Black Ticket Cinemas from other popular subscription-based OTT platforms is that it is a purely no-subscription basis.  Start streaming at official website of Black Ticket Cinema !