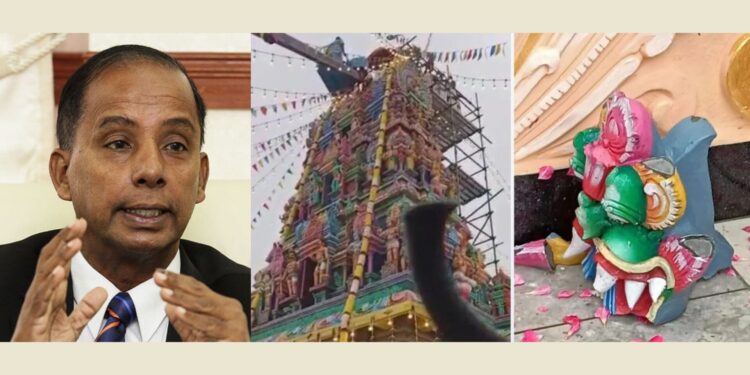 Last Sunday, Malaysians were devastated by the sudden news about a woman who died after being struck by fragments of a stone statue that fell from a temple building during a consecration ceremony in Buntong.

The ex-minister said that using a crane to do the gopuram consecration was unsafe (temple tower). The Ipoh Barat MP, who was 30 metres away from the woman when the debris hit her, claimed the event might have been prevented.

“A poor mother of three died and three others were injured. A special investigating team from the occupational safety and health department (DOSH) ought to have gone to the site right after the incident. There are clear indications that occupational safety laws were not followed,” he told FMT.

According to Kula, who managed DOSH under his prerogative, the crane operators were communicating using hand signals rather than walkie-talkies.

“I saw them signalling and next thing you know, the boom swung so fast the gondola hit the gopuram at speed. Was safety compromised? Did the police alert DOSH after the incident?” he asked.

He said the government should set up a national Hindu endowment board to regulate rules related to temple consecrations so that temple committees can avoid such mishaps. Meanwhile, DOSH acting director-general Anuar Embi announced that this issue will be thoroughly investigated.

In addition, he said the Occupational Safety and Health Act 1994 and the Factories and Machinery Act1967, which govern crane usage, allow fines ranging from RM50,000 to RM500,000.

“Worker safety must be ensured and there should not be any risk to the people exposed to the activity. We will investigate to see if there was any breach of the law,” he told.

During the Maha Kumbhabishegam Welcome Ceremony, R Manimegalai was hit by a piece of shattered ornament that fell from the top of the Arulmigu Visalatchi Sametha Kasi Visvanathar Temple tower after it collided with the crane.

She died after suffering severe head injuries while receiving treatment at the Raja Permaisuri Bainun Hospital (HRPB). Two other ladies who happened to be there suffered minor injuries.