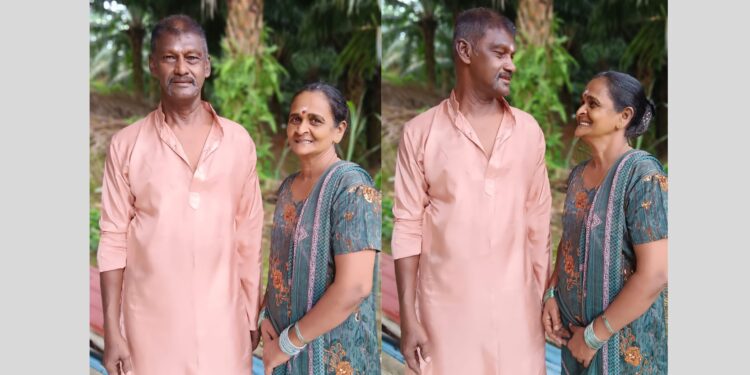 For all your love ; And all the support

The word I LOVE U ; Seems too few❤️

We cannot visualise our future without our parents, who are prestigious pearls in our lives. The unconditional love and support we received from them, along with all of our life’s successes, are indescribable.

They made a lot of sacrifices for our bright future, either with or without our knowledge. A mother’s call asking, ‘Have you eaten?’ with father’s precious advice and guidance for our lives and futures, can never go wrong.

Varnam Malaysia in conjunction with this year’s Parents Day took the opportunity to interview a beautiful couple Mr Letchumanan & Mrs Letchumy whom shared their precious moments and life stories with us.

Meet Mr. Letchumanan, 61, and his lovely wife Mrs. Letchumy, 56, who are our featured parents for this year’s Parents Day! Mr. Letchumanan was a former  palm oil plantation worker in the Ulu Remis estate of Layang-Layang. The twelveth child in the family, he is adored by his mother.  He left school at the age of 12 since it was tough for him to support his family situation.

Meanwhile, Mrs Letchumy was forced to leave school at age 15 since her father could not afford to pay for her education. Her desire to continue her studies was lessen due to her family’s financial crisis. Hence, she became an estate worker in Malacca and started to earn money for her family.

The adorable couple admitted that their union is absolutely an arranged one in the section where they describe how they first met. “We have never met before, so this was really strange given our names. Most people we have met before have questioned whether we’ve changed our names to better reflect us as couples. But believe me! Nothing was done with the name. That’s our real names.” Mrs. Letchumy stated.

The Malacca native couple Mr. Letchumanan and Mrs. Letchumy were blessed with a charming baby boy in 1988 after getting married on August 24, 1986. After that, they had another baby boy in 1990 and two adorable baby girls in 1995 and 1999 respectively. They led happy, quiet lives with a lovely little family of their own while working as estate workers at the time for a modest salary.

“Despite their little income, they never allowed us go to bed hungry. They fulfilled all our little wishes, from stationery, firecrackers on festivals to toys, in an effort to make us happy,” their eldest child Velan quoted.

Even though everything was going well at the moment, this small family was abruptly stricken by bad luck. After their fourth child was born, Mr. Letchumanan lost all of his contracts in the estate as a result of a serious bankruptcy, which prompted him to leave the estate.

“We never gave up easily no matter what occurred. Even though this really hurt us, We won’t allow it to affect our family – OUR CHILDREN,” the dedicated parents vowed to look after their children well.”

“Although we can withstand hunger, we cannot watch our children suffer from it. Though it doesn’t hurt much to lose all the contracts, it’s really upsetting to consider the children in that position,” the parents quoted.

They tried their hardest to get employment outside the estate despite having less education and knowledge. After much difficulty, they succeeded by landing a job as rubber tappers in Malacca and rented a small house for themselves.

“To be honest, at the time in searching for better jobs to run our family, we understood the value of education and made a self-promise to raise our kids with a high standard of education and strong moral foundation. No matter what, we prioritise the education of our kids before anything else,” Mr Letchumanan said.

Due to unforeseen reasons, this couple left Malacca and moved to Johor after a number of years. Both Mr. Letchumanan and Mrs. Letchumy are employed by the same firm, FORM UP ENTERPRISE, as truck drivers and store clerks respectively.

Even though the job is far harder than it should be for people their age, they still wanted to work overtime to pay for their children’s sustenance and education.

While sharing their life journey, the couple’s children shared one of their family’s biggest nightmare.

“Even though we had lots of happy moments, I could clearly recall that evening when our parents were driving home for a break from work where they met with an accident. That accident left our mom’s hand broken, and our dad gasped for air. My mother’s fractured hand required surgery, according to the medics, and our father also had minor injuries,” the second child Murali stated.

Meanwhile, the third child – Yogeswari added that this couple recommended having a break at home because of their advanced age and the need for more time to recuperate fast, but they were eager to go to work instead. The only reason for their action is that their children were all enrolled in colleges and institutions at the time, and they needed to make money so they could eat and study without interruption.

‘As the saying goes : A real parent is someone who puts their kids above their own selfish wants and needs’ and this is one of the example of it!

“The years went by quickly. All of our adorable little kids have grown up now”.

Their children consistently fulfilled their desires and dreams, just as this sweet couple had wished. Velan, the first child, was already a seasoned supervisor at a respectable business and having his own little family with his wife and little daughter. Meanwhile, the second child, Murali, was an IT specialist with a bachelors’ who worked for SUNLIFE Malaysia in Kuala Lumpur.

They also have, Yogeswari, their third daughter, who also holds a diploma in Information Technology and Diviarasi, their youngest child, who is presently pursuing her studies in Bachelor of Broadcasting and Journalism.

“Everything we are today and everything we may become tomorrow are all due to the sacrifices our parents made for us. A big thank you to you mom and dad. We love you always!”–VELAN, MURALI, YOGES & DIVIA

“We were successful in achieving what we had hoped and promised! Since they made us proud with all of their accomplishments, we were really glad for them. All the struggles were paid off with this” the lovely couple stated divinely.

Despite the obstacles they encountered, they persisted in their aim and struggled constantly to grow their children and depriving themselves of rest and energy and having to complete the work alone. But now, as a result of their diligent efforts, their children are now well-settled with their beautiful family and having a great education, which is undoubtedly a significant victory for them.

No amount of appreciation is enough to express gratefulness to the both of you!

No words in the world can express parents sacrifices for their children. We wish HAPPY PARENTS DAY to all the wonderful parents all around the world!

❤️  You are the REAL GUARDIAN ANGELS! ❤️