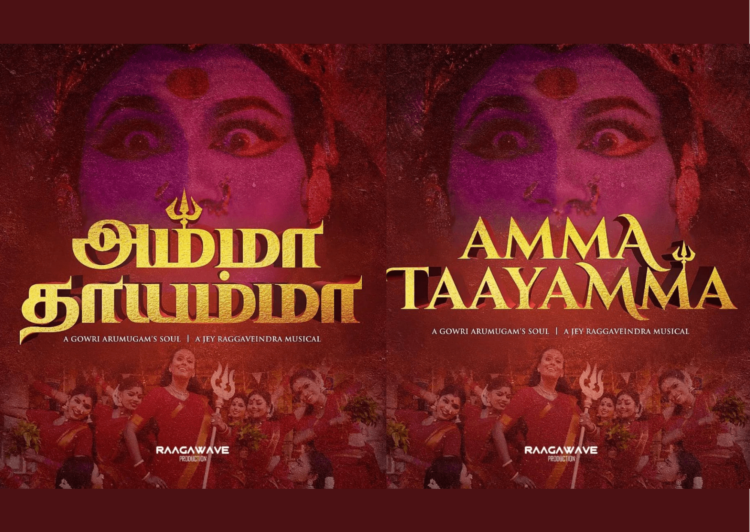 As the month of Aadi begins today, one of the notable pioneers who kept on nurturing the Tamil music industry, Gowri Arumugam is back again with a new devotional song aptly titled ‘Amma Taayamma’.

Helmed by Raagawave Production, this music not only serves as the foreword song for this holy month but also emphasises a powerful social message.

Starting with a short skit, Hamsni Perumal, a spiritually inclined wife who is facing domestic violence, met a woman at the temple. The track starts with a powerful Indian percussion instrument backing, this divine upbeat track chaperoned by Gowri Arumugam‘s powerful vocals with a compelling chorus.  ‘Amma Taayamma’ is beautifully written by lyricist Su. Vaasagan and brilliantly composed by Jey Raggaveindra.

The music is wonderful to hear on its own, but the accompanying visuals have lifted its soul to a whole new level. Every scene in this music video is beautifully captured with excellent editing and cinematography. A huge kudos to the video team.

Apart from that, another element that will grab your attention is the Amman played by the talented makeup artist, Kannan Raajamanickam. In his Goddess avatar, Kannan exudes exquisite grace and a spirit of divinity. (Even with the fleeting appearance, you’ll have goosebumps)

Overall, the song “Amma Taayamma” is incredibly powerful and impactful, and everyone should listen to it.

The listeners swarmed in with praises for this track upon its release:

This enthralling music video was released on Gowri Arumugam’s Youtube channel, check it out:

Huge applause for the great effort taken by the entire team in producing this beautiful music video: