Adiwiraku (My Superhero), a local Malay film has our hearts swelling with pride after paving its way to Netflix recently. Over the last recent years, Malaysian film makers have produced plenty of award-winning and entertaining flicks.

Helmed by Eric Wong, the film narrates the story of a young teacher who left her job in the city and decided to teach 35 underprivileged children at a rural school, Sekolah Menengah Kebangsaan Pinang Tunggal.

What makes ‘Adiwiraku’ so special in the hearts of netizens?

Loosely based on the real-life story of teacher Cheryl Ann Fernando who inspired the film Adiwiraku, the film pulled us from all sorts of angles. Released in 2017, Adiwiraku managed to capture the tale of students in the Malaysian countryside, which is in no small part because the students in the film are the same students who won the district-level choral speaking competition.

The film has been crowned with multiple awards, including the Best Film, and Best Original Screenplay awards at the 29th Malaysian Film Festival (FFM 29).

Despite being a newcomer to the Malay-language film, Sangeetha who roped in the lead role won the Best Actress award in the Festival Filem Malaysia 2017, Anugerah Skrin 2017, and The Kuala Lumpur Film Critics Award 2017. She was the first actress to win all three awards in the same year.

Additionally, the film had its premiere at the Tokyo International Film Festival and was shortlisted under the Best Story category at the 58th Asia-Pacific Film Festival.

It’s been five years since the film had its theatrical release, and now it will be accessible to over 190 countries. A great milestone indeed! 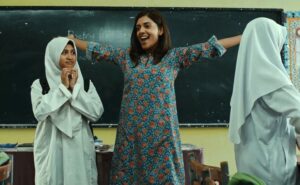 If you’re looking for a beautiful teacher-student bonding film, ‘Adiwiraku’ will fit the bill. Ain’t gotten a chance to watch the movie to date, head on to NETFLIX now.