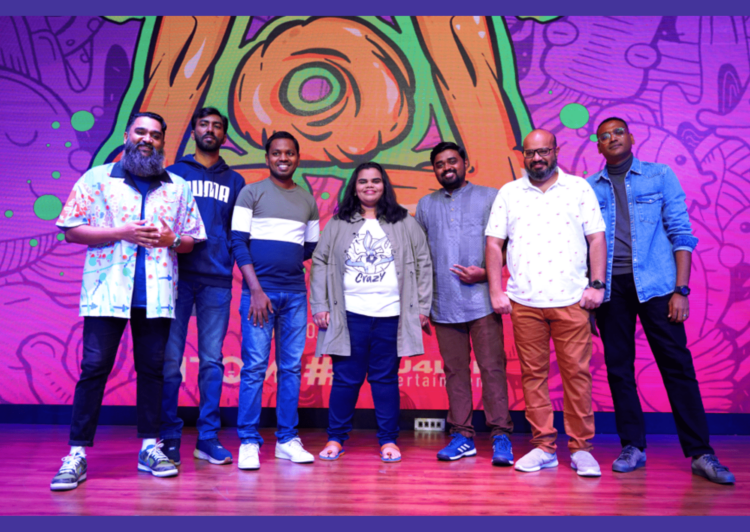 This show presented a phenomenal fun-filled night that proved the cliché that laughing is the best medicine.

Approximately around 6.40pm, the large crowd began to enter the hall after receiving their respective entry wristbands. Overall, the process was smooth thanks to the on-ground crew.

This show, undoubtedly did what it promised – To make the audience laugh out loud with the best back-to-back craziest live acts of various comics deluging with a generous array of jokes and heaps of music along with a splash of classic humour.

At 7pm with no delay, Hindra Bose jumped onto the stage and kicked off with some humorous sitcom engaging with the audience through his style. Next up is the comedian who entertained everyone for almost a decade, Prakash Daniel got the audiences cracking up with his Indian household jokes.

The Most Awaited Stand up Comedians From India

The wait is over! The show continued with the first Comic from India,  Praveen Kumar. Without any trepidation of being the first to begin his act, he stamped his gig comparing Malaysian traffic by enacting India’s traffic followed by his ‘Wedding Alaiparaigal’ farce. His clean humour and jokes garnered non-stop claps from the show-goers. Then, the one and only lady of the show, Syama Harini stepped in by engaging with her fans about her experience stepping out from India for the first time with her wittiness, amassing applause from everyone.

Without any intermission, the show continued with Mervyn Rozz. He wins the hearts of everyone just within 2-minutes of his act. None of the lineup comics interacts with the audience, like the way Mervyn does. Going full-on oomph with scintillating jocular, the sales manager turned standup comedian boom with hilarious on-spot jokes. The sharp-witted comedian, Jagan Krishnan leapt in as the last act of the day. He pulled the crowd’s attention with his amusing collection of wisecracks.

Not to be forgotten is Manoj Prabakar, who doubled as the show’s host and comic. Hailing from Chennai, Tamilnadu, Manoj helmed both roles with his full humorous chatters with the audience. Even while hosting, mentioning the patrons he made a spontaneous joke out of it. In his stint, he covered various topics from his IT working ventures to his foreign bit experience.

The show ended beautifully with the sea of flashlight chaperoning Jagan’s most awaited Harris Jayaraj hits.

The grand hall was filled with nothing but applause and cheers throughout the entire three-hour show of effortless and a gratifying performance overall.

A surprise was revealed before the final curtain call!

By playing a motion poster, Number Twenty One Media and PU4LYF Entertainment revealed that LoL 2.0 is set to take place soon!

Clue: An excellent talent who’s the presence that’s sure to leave you wondering (I’m pretty sure you can guess the person right)

As previously said, each and every audience went back home with TEARS FROM LAUGHING THEIR HEARTS OUT!

The almost 3-hour long show was filled with hilarious propitious. A big kudos to the entire crew of Number Twenty One Media and PU4LYF Entertainment, for all of their efforts leading up to this event.

We are excited to see your upcoming project!