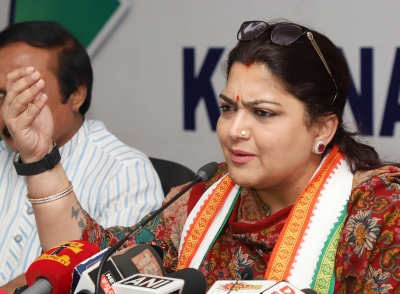 Actor-turned-congress leader, Khushbu Sundar, slapped a congress worker who allegedly misbehaved with her during an election rally.

Khushbu was in Bangalore to campaign for Congress-JDS alliance candidate Rizwan Arshad on April 10. Thousands of the party workers had gathered near the house of Rizwan. The actress came out of his residence along with Rizwan and Shantinagar MLA Nalapad Ahmed Haris and was heading towards the vehicle meant for the rally when the person misbehaved with her.

A video featuring Khushbu Sundar slapping the person is creating a lot of attention in the social media. However, the video does not offer any clarity on the misbehaviour of the person. A policeman pushes him back soon after she slapped him. Many are still clueless about what happened and how she lost her cool.

Although the clip went viral, Khushbu did not put out a statement. She has been retweeting the media reports and tweets from her followers. Many came forward to praise her for “not putting up with any misbehaviour”.

@khushsundar akka u r the bestttt 🙏🏻🔥💪🏽 more power to u pic.twitter.com/zJJRHJmvYq

“That’s a job well done. Nobody has the right to abuse, and if he does, then he should be punished,” commented one of her followers. Another dubbed her as a “bold lady forever”, and said that she was a “big inspiration for every girl in this critical world”.

No one has reported the incident as of now.