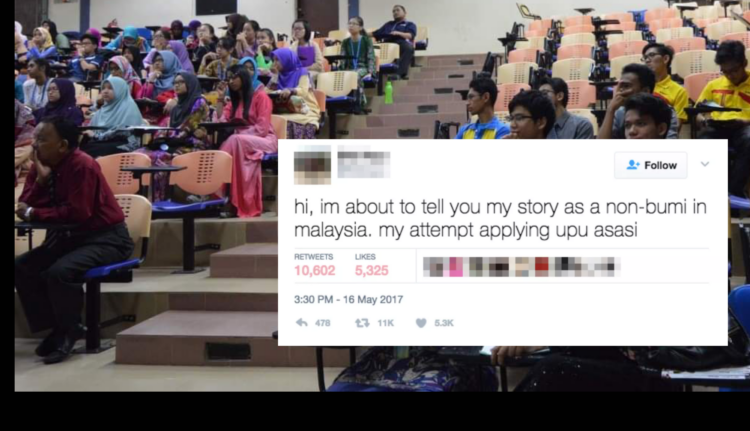 In my previous article, I took us along through the Malaysian education system.

Let us look at the reality! Shall we?

Non-Bumiputera students experience discrimination and racism during their pathway to further their studies. This has given rise to demands for universities to fight against rising Sinophobia.

The Ministry of Education (MoE) has declared that the 90:10 quota favoring Bumiputera students in the pre-university matriculation program will be retained amid persistent demands to do away with racial preferences in policy-making. This has given rise to demands for universities to fight against rising Sinophobia.

Consequently, most ethnic Chinese and Indians are confined to Sijil Tinggi Pelajaran Malaysia (STPM), which lasts almost two years and is considered as more academically difficult because it is related to the local assessment syndicate of the University of Cambridge and comparable to the British A-levels.

Some Indian students were unable to get into their chosen courses with a perfect cumulative GPA. Some didn’t even get a placement at a public university.

In 2013, various news reports highlighted a local political party stating that the higher education office said that 10 students had scored a perfect GPA but did not manage to get a placement for their preferred course.

The Indians attach immense significance to education and are still willing to make sacrifices for the sake of an education.

The Education Ministry received a total of 84,891 applications for MOE matriculations 2018/2019 session which includes 20,040 from non-Bumiputera students. However, 4,068 non-bumiputras were ultimately accepted in the end!

To add salt to the wound, Former Prime Minister Tun Dr. Mahathir Mohamad was quoted as saying that:

“We agreed to hold matriculation classes because we found that Malays did not take the Higher School Certificate and could not reach university. So for them, we provided a back entrance. It was entirely meant for the Malays as a back entrance.

The pre-university admission route was formally planned for bumiputras and Dr. Mahathir’s remarks seemed to mean that only one group should gain from it.

Well, I would like to highlight that as for the Indian community, the T20 group stands at 19.98 %, led by the M40 wage earners at 41.31% and B40 38.71%. It’s too obvious that not all non-Bumiputeras are affluent and the quotas must also remain in place to allow the Bumiputera to compete on an even footing. If it was still justifiable in the first place, the quotas are no longer justifiable.

So, my question is how do the non-bumi’s from middle and lower income families send their children to private universities?

Notwithstanding, the main concern here should be supporting and securing everyone’s access to higher education.

The system is usually seen as an easier channel for Bumiputeras to access public universities. Most non-Bumiputeras are disappointed with the public education system in the country, which tends to favour a certain race, limiting them of equal education opportunities.

The frustration is exacerbated by the fact that the Malaysian Higher School Certificate (STPM), the alternative to this pre-university course, takes longer to complete and is considered to be more difficult. This has contributed to a common perception over the years that non-bumiputras have to work much harder in comparison to Bumiputeras for the same access to a university.

Despite their despondency in the way the government handled their hard work and real needs, the students may have opted to remain in the country due to financial reasons or simply unable to get a scholarship to study abroad, but some who can afford it would not think twice nor hesitate on leaving the country to further their studies.

It’s an ethical imperative for the government to take steps now to tackle this type of discrimination. Malaysia wants to look at these measures again, and now the government can make adjustments so that the right to education does not revolve around one’s race anymore. If action is not being taken soon, there is a possibility of worrying about their future amongst upcoming youngsters who have a bright future.