Vishal Detained By Police in Chennai

Actor Vishal has been detained by the police following a standoff between the two parties out side the Tamil Film Producer’s Council (TFPC) office earlier today. Vishal is the President of the TPFC.

Yesterday some 300 producers had joined forces and locked the TPFC offices in T Nagar and Anna Salai in Chennai, demanding Vishal’s resignation.

Vishal and actor Mansur Ali Khan were attempting to break the lock when he was detained by the police. 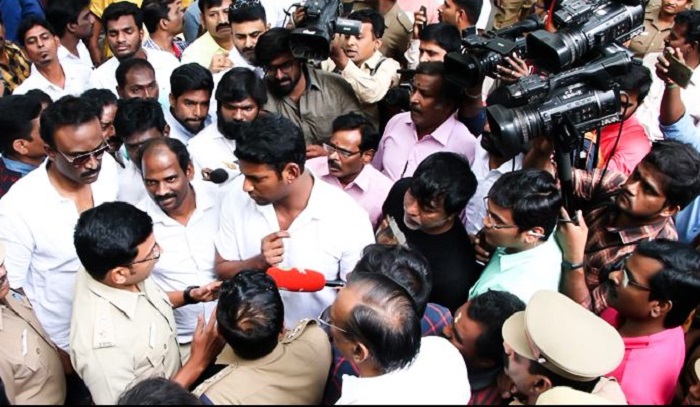 The troop of 300 producers are led by AL Azhagappan. They alleged that Vishal was involved in criminal activities and misappropriation of funds totaling ₹7 Crore (RM4.2 million). The producers also demanded that Vishal hand over the accounts of the council to them. According to Azhagappan, no general committee meeting was held since Vishal assumed office.

In addition to that, the producers claimed that Vishal has organized events under the banner of TPFC without the general committee’s approval, which was a violation of the by-laws. According to the producers, both the elected Vice Presidents, actor Prakash Raj and director Gautham Vasudev Menon, do not attend TFPC meetings at all.

Vishal has not only been at war with this group of producers, but also with the police. He claimed the police were standing watch and were present when the office was locked by people who were not members of the TPFC.

Vishal accused the police of allowing criminal trespassing and preventing the office bearers of the TPFC from entering the office. He was then detained by the police and taken to the Teynampet Police Station. “I have not done any mistake. They are not allowing me to go inside my office. If we ask questions they are arresting us. This is unbelievable,” said Vishal to the media.