South Indian actor Nayanthara and her beau director Vignesh Shivan are on a romantic sojourn in Santorini, Greece. The duo have been sharing photos and videos of plane tickets and luscious views on their social media platforms.

The couple posted a photo of Nayanthara with a reflection of Vignesh in the window captioned as “Us” and added a ring emoji in it. The two connected while working together on the movie Naanum Rowdy Dhaan and the rest was history. The duo are spending their time at a romantic luxury resort called Cavo Tagoo that costs up to RM8,000 a night.

On the work front, Nayanthara’s next movie is Chakri Toleti’s KolayuthirKaalam and Vignesh Shivan is busy preparing the script for his next film starring Sivakarthikeyan. 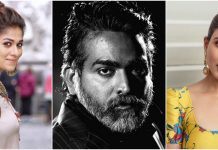