Since the bloom of the digital age, the use of digital mechanisms such as computers and smartphones have increased rapidly. This development has beyond a doubt led a shift from traditional lifestyle approaches to a one that is very convenient and fast paced.

This digital birth, however, has also gone down a different road, triggering a spike in social moral panic. The number of people involved in this catastrophe is growing exponentially, regardless of age or gender.

Recently, a viral news has been up all over social media. It has come to our attention that a telegram group called V2K or also known as Vitamin4Testicles has been sharing unsolicited photos and videos of girls; also selling child pornography to its users.

The chat group previously had around 38,000 users but the numbers have been declining after details of the group and names of certain members went viral. Not long after that, they created a new backup group, “V2K Backup”, which has garnered over 1,000 members.

According to Malaysiakini, police are probing and investigating the Telegram group that allegedly spread photos of women without their consent.

She added that they will be working with the Malaysian Communications and Multimedia Commision (MCMC) to further investigate the matter.

Following the revelation, users around the internet are outraged and disgusted by the existence of such groups.

i pray that all the men in that v2k group suffer from erectile dysfunction and their pp gets infected then the parasites eat their insides and they die a very slow, painful death

Although steps have been carried out to close the group, the members of this nasty group seem to have a back-up link if the main Instagram account is blocked. 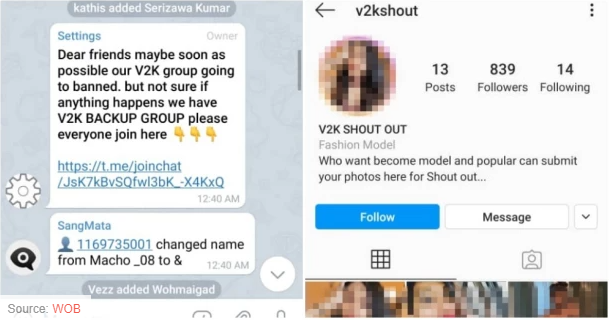 Telegram, a social networking application that has greater security and identity protection than most networks out there has now become an app present with vice activities.

Just this year alone, the country has already seen issues of toxic masculinity amongst young men resulting in fatal consequences for women. A 17 year old girl committed suicide on August 3, as a result of online sexual harassment by a 20 year old man, who threatened to make her pictures viral if she did not have sex with him. A 20 year old woman hung herself in her room on May 19 when she was cyber bullied by a male perpetrator online, who still has not been caught by the police or MCMC.

Don’t be afraid to call out or take action against people you know that engage in such activities. These act’s shouldn’t be tolerated nor ignored. Please contact the Malaysian organisations listed below and seek help if you are a victim of sexual assault:

Act before its too late! This is a crime alright!

A Lans Koperal (L/kpl) policeman and a teenager was charged at the Johor Magistrate’s Court here for distributing 181.95 grams...

A brutal abuse in the heart of Johor Bharu involving two children has dominated headlines for the past few weeks,...

Called the generation Alpha, they are the children of the millennials and early gen Zers. These young minds are influenced...

Widow M. Vikneswari was devastated to find that the nanny who was being paid RM800 per month to look after...