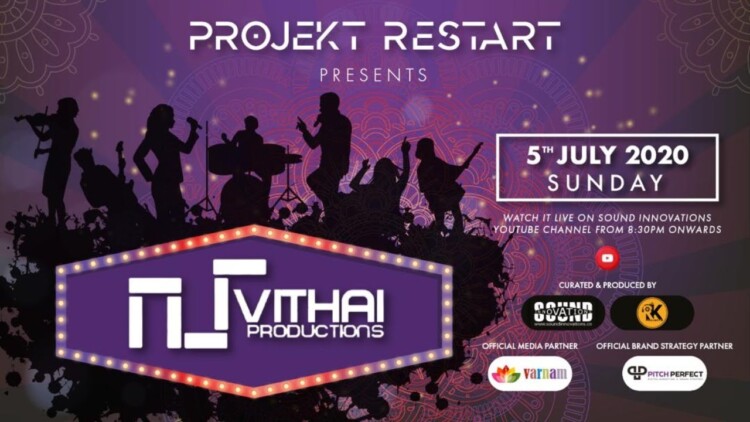 As the nation eases its way out of the movement control order and with the “new normal” that we all have been embracing, it was a blessing in disguise when RK Projects and Sound Innovations decided to initiate “ProjeKt Restart”; an indoor live band performance, in a stage setting with live streaming for a good 45-60 minutes on their respective Facebook and You Tube channels. RK Projects and Sound Innovations aim to showcase independent local talents and their repertoire, as well as covers of existing tunes with ProjeKt Restart. With this initiative, we have been able to enjoy some good music from the comforts of our homes.

After three successful indoor online concerts, ProjeKt Restart is back with their next offering for live music fans, this time featuring Vithai Productions this coming Sunday, the 5th of July 2020 at 8.30 pm. A pool of ardent musicians seeking to invade the world of music created Vithai Productions in the year 2015. The group of youngsters are well skilled as critics and known to provide exquisite ideas, with edified members in Carnatic music.

As Vithai Productions’ first release, Uyire Uyire reached 2.4 million views back in 2015,  singers and instrumentalists such as violinists, keyboardists, percussionists and guitarists got on board with their team, releasing more amazing originals and covers.

The team expanded with singers well versed with various genres of music such as Carnatic and western.

Vithai Productions is known as a music family that creates a pathway for young talents speaking the language of music to be heard and seen by the world.

The sheer amount of talent streaming live on ProjeKt Restart is going to be like nothing you’ve seen before. Don’t miss it!