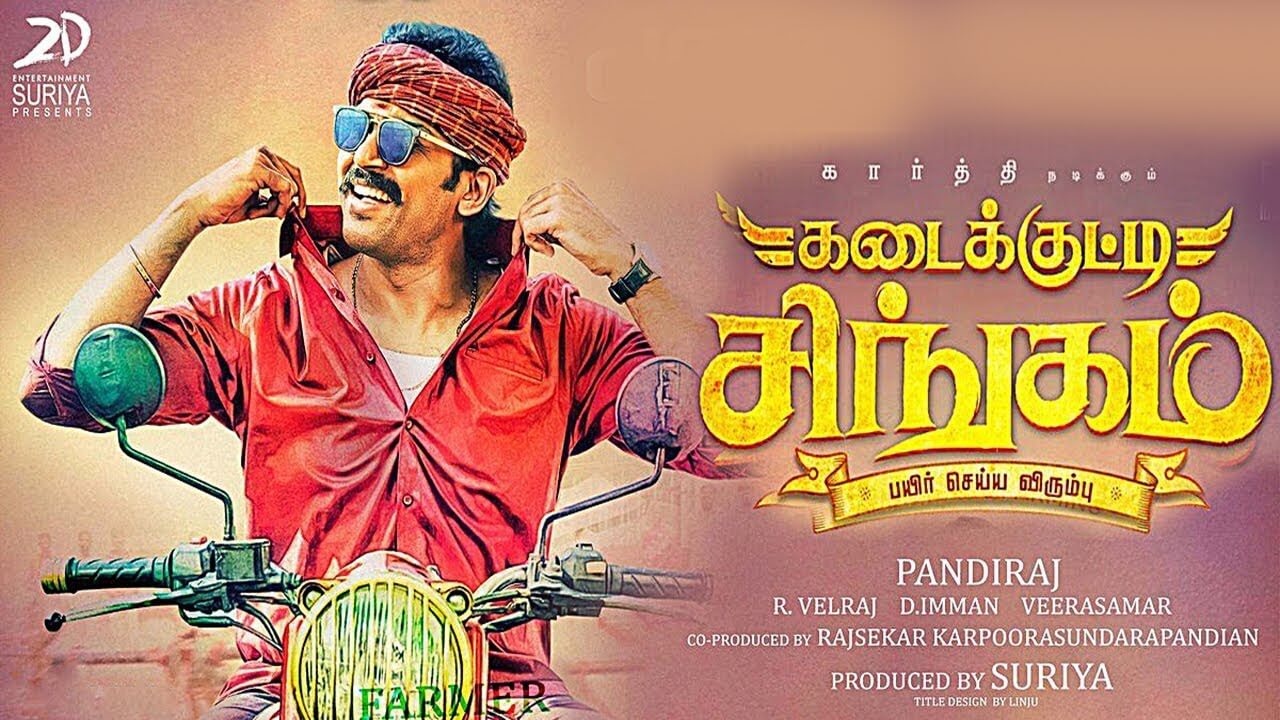 By the time I realised what exactly Kadaikutty Singam is about, it was too late to turn back and run. After the film’s prologue — Sathyaraj plays an elderly man who desperately wants to birth a boy, so desperate that he’s willing to marry two people (sisters) — we cut to the present where the youngest and only child of Sathyaraj has grown up into Karthi. We get your standard hero introduction in a bull racing sequence that tells you everything you need to know: Karthi is a badass, Karthi is a badass and Karthi is a badass. I enjoyed it. I like my Mass-Masala introductions.

The Karthi character, whose name here is Gunasingam, is a farmer. But unlike most Indian films that portray farming as a hellhole of a job, one that’s high on suffering and low on revenue, Kadaikutty Singam shows us farming as a career (our hero says he earns 1.5 lakhs [US$ 2100] a month). It’s true. With the rise of interest in fitness and health, and with Veganism becoming a trendy lifestyle choice as opposed to it being a dietary plan for people with eczema and indigestion issues, there has been a massive spike in demand for organic produce turning farming into a highly profitable career option. 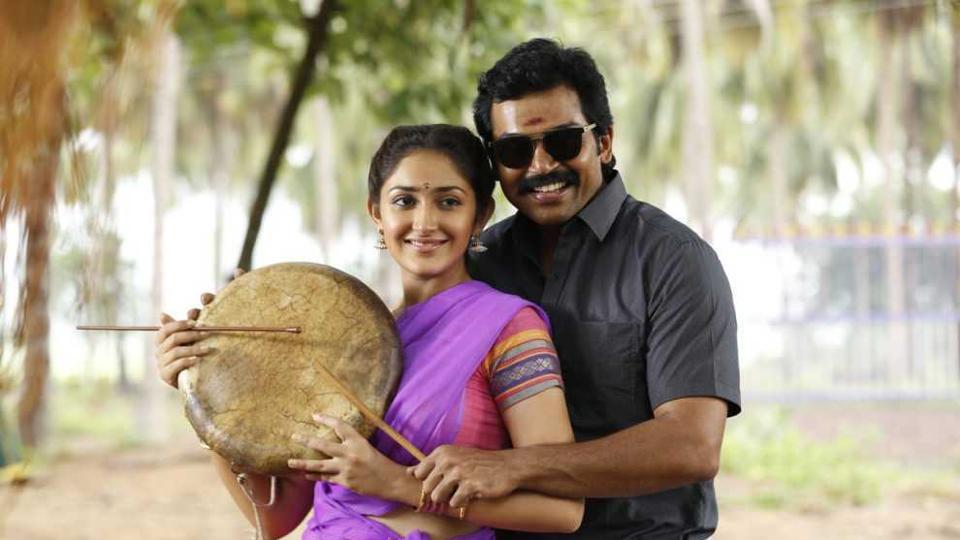 But the film also does well to highlight — without beating us over the head — our farcical, ego-driven Indian mentality. Despite being the richest one in the family, some of Gunasingam’s family members don’t consider him to be the “same level” as his relatives who are Engineers and lawyers.

All this happens in the opening 15 minutes or so of the movie. So it’s only natural that one would expect the story and conflict to revolve around farming. Perhaps the villain is a slimy businessman who wants to take over the plot of land? Or perhaps the villain runs another, less profitable farming business. Take Kodi for example. In that film, the romance, the animosity and the family drama are all held together by politics, the crux of the narrative. 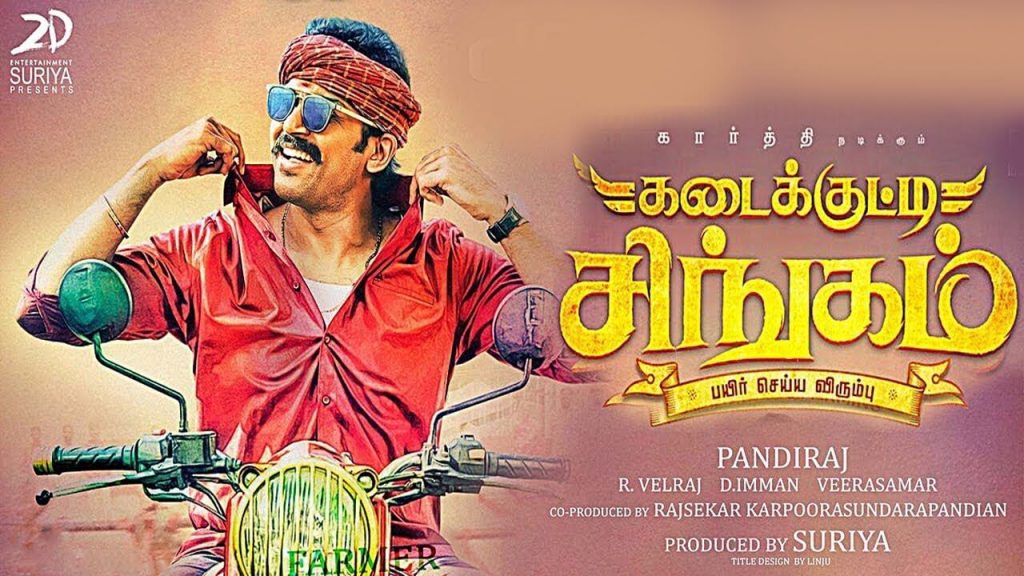 But Kadaikutty Singam has no focus. Out of nowhere, we have a villain, whose anger has got nothing to do with agriculture and everything to do with caste and politics. Only, he’s in the same caste as Gunasingam, so where’s the conflict? Later we learn that the villain is related to Gunasingam’s lover. Except the villain isn’t her overprotective cousin/uncle (it’s all very confusing) nor is he interested in marrying her. So what’s the point? There are random, completely unrelated plot points that are introduced just so we can have some mass-y action sequences.

And then as the movie lumbers along like a one-legged Stevie Wonder, it unravels itself to be a melodramatic, oftentimes silly family drama about Gunasingam breaking the family up because he doesn’t want to marry any of his nieces. Look, I love family dramas. But a good family drama needs to consist of actual characters. Good movies likes of Aanandham and Kabhi Khushi Kabhie Gham comes to mind. Or what about great ones like The Lion King and The Godfather (you daresay it’s not a family drama?). In these movies, the frames are filled with three-dimensional characters, who go on a journey together. Kadaikutty Singam is about nothing. Nothing in this movie makes sense. Like how a highly educated girl, who earlier in this film put her foot down and said, “guys and girls can hang out alone and just be friends,” is also desperately in love with her uncle. 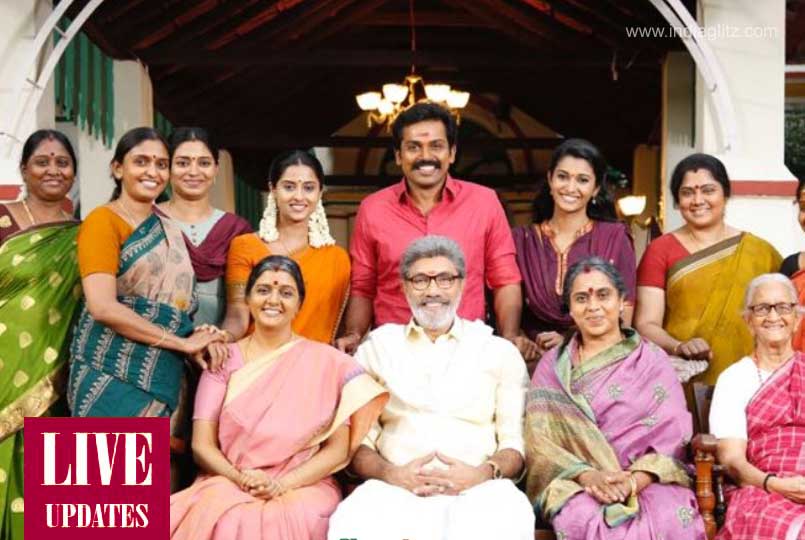 Almost all the supporting characters are caricatures. And they’re doing most of the heavy-duty yelling and crying and suicide-threatening. It’s ridiculous and oftentimes cringeworthy. So much so that the comedic relief character played by Soori is not only the most sensible one in the movie, he’s also the only interesting character. Karthi’s performance is good (you can’t go wrong with either of the Sivakumar siblings), but his character doesn’t do anything compelling. This is a mass movie without much buildup, a family movie without characters and a movie about agriculture in which the agriculture-ing turns out to be nothing but a gimmick.

The film is also poorly directed. Scenes fade in and fade out without much interconnectivity, which is weird considering its helmer is Pandiraj, who did a pretty competent job with Pasanga. Here it seems like he shot a bunch of unconnected scenes and told his editor “have fun bro.”

There are moments toward the end of the film (the movie has two climaxes. I’m talking about the first), where Karthi takes the material he’s given and performs the shit out of it. I actually felt a tear rolling down my cheek. And then we cut to the second climax, which did a great job in reminding me what a waste of money Kadaikutty Singam is.