With this film, Pradeep beautifully conveys an importance about the value of mutual trust. 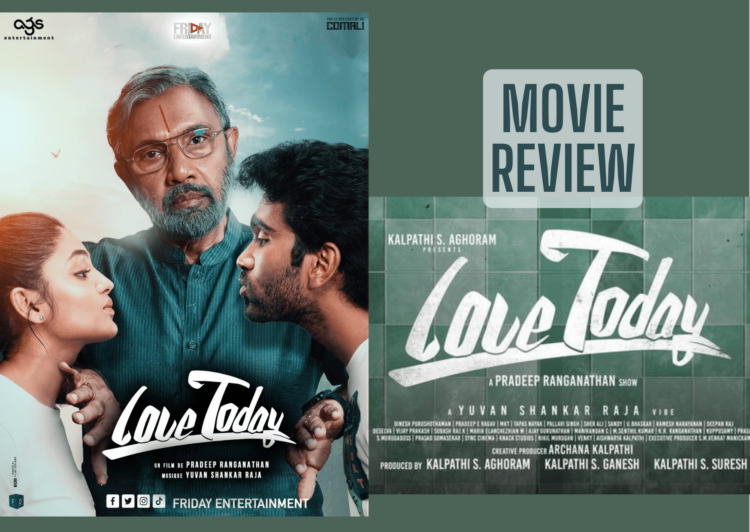 This rom-com movie is an extended version of Pradeep’s Appa Lock (2017) short film.

Pradeep Ranganathan who debuted as a director 4 years ago is now back again on track with a brand new film aptly titled ‘Love Today’, but this time he donned a double role; as an actor and director.

Upon its release, netizens showered Pradeep and his film with tonnes of love and positive feedback. Seeing all the hype and buzz circulating about this movie, the writer hops on to watch this film on the big screen. (Hell yes, this movie is worth watching and this fun-filled movie deserves to be celebrated)

With engrossing scenes and a brilliant screenplay, Pradeep yet again proves that commercial films are his forte. Let’s dive in deeper~

Love Today centres around a young couple, Pradeep and Nikitha (Ivana). The story gets heated up when Nikitha’s strict-conventional father, Sathyaraj made makes the couple exchange their phones for a day, promising that he’d get them married if all goes well. Both Pradeep and Nikitha agree to it half-heartedly and Pradeep comes back home to manage his sister’s wedding event. With discovering some disclosure, Pradeep goes to Nikitha’s house the next day to extends the exchange until the end of his sister’s wedding. However, the extension he asked for backfired on him when Nikitha and his father were able to recover his deleted messages. What follows is a hilarious and emotional scene. Will they be able to sort out their issues?

Well, we all can agree that Pradeep is such a good actor. Be it a comedy scene or an emotional scene, Pradeep has done a pretty laudable job. Apart from the main lead, other characters like Raveena Ravi, Yogi Babu, Sathyaraj, and Radhika Sarathkumar also played a major roles in carrying the oomph of this film.

One of the characters which were crafted by Pradeep that left a lasting impression is Yogi Babu’s character as Doctor Yogi. Through the character he was given, Yogi, who played Pradeep’s future brother-in-law, strongly conveys the ongoing body shaming issues that many people are currently dealing with. Kudos to Pradeep for emphasizing this issue, as many are still taking it lightly.

Each scene was well carved.

There are many scenes which have already been viral on social media for its entertaining and relatable content. One of the scenes that captured my attention was the flashback scene where little Pradeep planted a mango seed in the hope to grow a mango tree and reap the mangoes. But the long wait made him to lose interest in the tree. During the heat-up of the climax, he was flabbergasted to witness the mango seed that he planted long ago, grew majestically. Even through that, he conveys such a motivating message.

Furthermore, the chat visualisation presented by Pradeep in this movie is such a clever idea, it really made the audience stay hooked to the screen. Towards the end, Yuvan Shankar Raja’s background score helps elevate the emotions towards the climax.

To sum up, Love Today is an exciting rom-com flick that delivers full-on-full amusing events with a thoughtful message.

Not related to the movie, but am I the only one who sees Dhanush’s aura in Pradeep’s acting? Share your thoughts in the comment section.

Love Today is distributed by LFS and is running successfully in Malaysian Cinemas.