Deepika Padukone Birthday Special: All The Moments This Bollywood Dimple Queen Made Her Mark On The World Stage

Deepika remains at the top of her game. 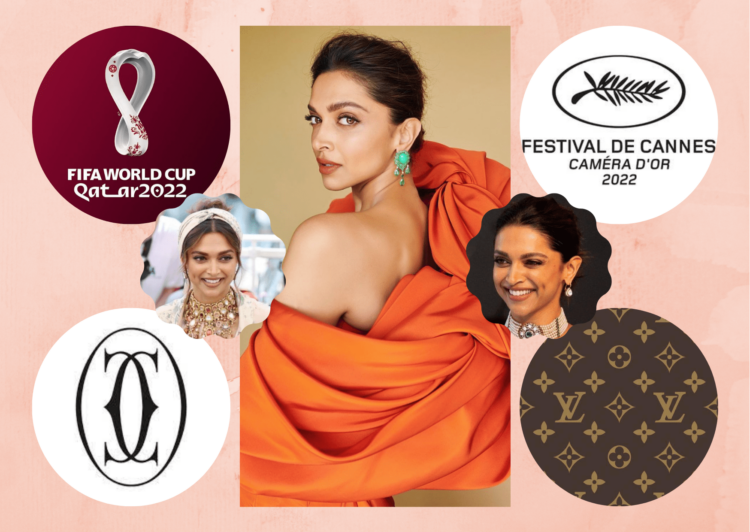 5th January marks the birthday of the gorgeous diva of Bollywood, the one and only Deepika Padukone.

The now highest-paid actress started her Bollywood acting career in 2007 with the film Om Shanti Om along with Shah Rukh Khan. Since then, she has continued to prove her extraordinary acting skills in a plethora of film genres. Deepika Padukone has cemented herself as one of the most prominent actors of her generation throughout the years. In addition to being starred in movies, this actress has successfully dabbled in both production and entrepreneurship.

The 37-year-old philanthropist also has the world at her feet. Recognizing her massive popularity, the global star has some of the best brands latching on to her and she even stamped a historical feat in FIFA 2022.

Deepika Padukone creates history and made all Indians proud when she became the first Indian to unveil the FIFA trophy during the final at Qatar 2022. The superstar escorted the FIFA World Cup trophy in a specially commissioned truck and unveiled it at the Lusail Stadium. Weighing 6.175 kgs and made of 18-carat gold and malachite, the trophy unveiling is a very important part of the pre-match ceremonies, thus making it a global moment for all Indians, thanks to Deepika Padukone as she walked in with the FIFA legend and former Spanish Professional Footballer, Iker Casillas Fernandez. The diva looked absolutely breathtaking in a white shirt, brown overcoat, black belt and billion-dollar smile.

“From unveiling the FIFA World Cup Trophy to witnessing one of the greatest games in sporting history. I truly couldn’t have asked for more,” – Deepika Padukone

Deepika becomes the first Indian brand ambassador of the french luxury brand Cartier. The news was made official when the official account of Cartier made an announcement, saying that it is a pleasure to have Indian actress and philanthropist Deepika Padukone in the family. The brand posted a monochromatic picture of Deepika Padukone wearing a Cartier diamond necklace.

The Maison is pleased to welcome the Indian actress, producer and philanthropist @deepikapadukone to the family as its newest ambassador. #Cartier pic.twitter.com/mwjr8qY2Vm

One of the Jury of the Cannes Film Festival 2022

Deepika Padukone is representing the country on the international stage. The ‘Chennai Express’ star again made headlines all over the world when she becomes the first Indian to be chosen for the Cannes jury duty. She is one of the eight jury members at the 75th edition of the Cannes Film Festival, which was held in Cannes, France, from 17 to 28 May 2022.

The actor showcased many looks at the gala event. From saree to dresses and gowns to pant-suits, Deepika wore it all with utmost grace. Deepika was seen on the Cannes 2022 red carpet six times.

The diva also holds the history as the first-ever Indian brand ambassador of the luxury brand Louis Vuitton. The brand unveiled the role of this Bollywood actress during their new handbag campaign. It saw Padukone joining actors Emma Stone and Zhou Dongyu for promotional shots. The Indian beauty first appeared in their pre-autumn campaign back in 2020 and has built somewhat of a designer-muse relationship with the brand ever since.

Great Treat for her Fans by Shah Rukh Khan

Today, the “King of Bollywood” Shah Rukh Khan bestowed Deepika’s fans by revealing a new poster of her from the upcoming action film, Pathaan. She looks incredibly fearless holding a gun like she is ready for the battle.

“To my dearest @deepikapadukone – how you have evolved to own the screen in every avatar possible! Always proud and always wishing for you to scale new heights… happy birthday… lots of love…” – Shah Rukh Khan quoted in his Instagram.