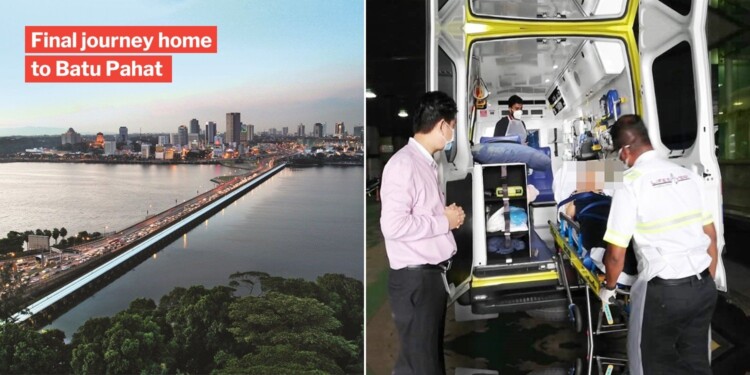 Cancer patient Tang Lijuan only had one wish, to reunite with her elderly father in Batu Pahat. The 46-year-old had been working in Singapore since 1995 and eventually became a permanent resident.

But her condition took a turn for the worse early this year at Mt Elizabeth Hospital, and time was running out. She was repatriated from Singapore to Malaysia amid stricter travel restrictions by both countries to curb the spread of COVID-19 on May 21, with the help of many, including Dr Kaarthigan Ramaiah.

Dr. Kaarthigan, a director at Lifesaver Ambulance Johor was with the patient in an ambulance throughout the two-hour journey to the Putra Specialist Hospital Batu Pahat.

“at the pickup location..my pilot brought the stretcher and we transported the patient as fast as we can to Hospital Putra while I’m trying to give my best management to the patient,” wrote Dr. Kaarthigan in a Facebook post.

According to Dr Kaarthigan, the ambulance reached the hospital as scheduled with the patient’s father seen waiting at the emergency entrance. Before the ambulance driver had pulled the handbrake, her father had already attempted to open the vehicle’s door to see his daughter.

“Once the patient was out from the ambulance, both father and daughter were speechless, no single word came out but only tears. (Goosebumps),” he wrote.

Dr Kaarthigan ended his posting by saying: “We received the news that she passed away yesterday (May 22). She was a brave warrior. May her soul rest in peace.”