Contract doctors are worried about their uncertain future. 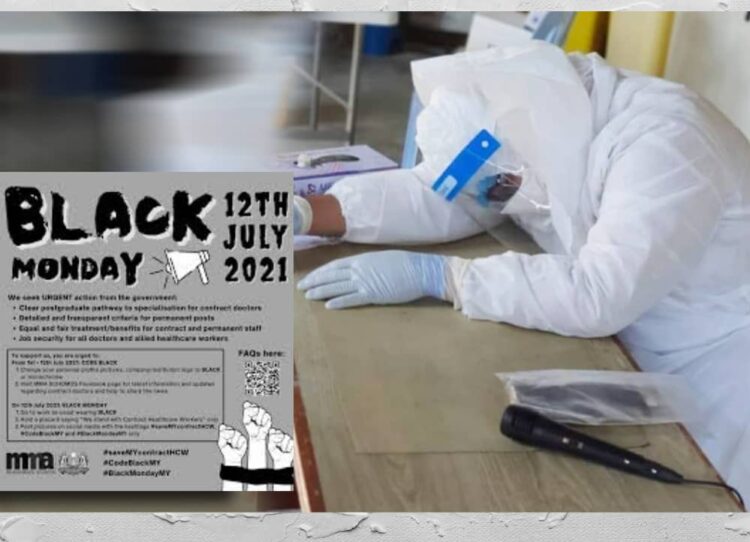 Thousands of junior contract doctors in Malaysia’s healthcare system, many of whom are in the vanguard of the country’s COVID-19 dispute, are revolting over a long-standing issue: inferior job terms than their predecessors. Hence, contract doctors have threatened to strike by citing their dissatisfaction with the fact that over 23,000 of them have not been automatically integrated as permanent staff, as has been the procedure in the past.

Malaysian Medical Association (MMA) Section Concerning House Officers, Medical Officers, and Specialists (SCHOMOS) wants to disassociate itself from the #HartalKontrakDoktor and urged for the long standing matter to be resolved by diplomacy rather than drastic action.

“We are compensated much less since we are on a contract and its been this way for years. Hence, we are not entitled to the privileges that come with working in the civil service,” a junior contract doctor told Varnam.

Both MMA and SCHOMOS rejected the notion of holding a strike during the pandemic and instead proposed their own “day of solidarity.”

In return, they have decided to hold the protest which represents government doctors in Malaysia by starting its Code Black week from today onwards (1st July). Two phases of Code Black will be implemented during the protest. 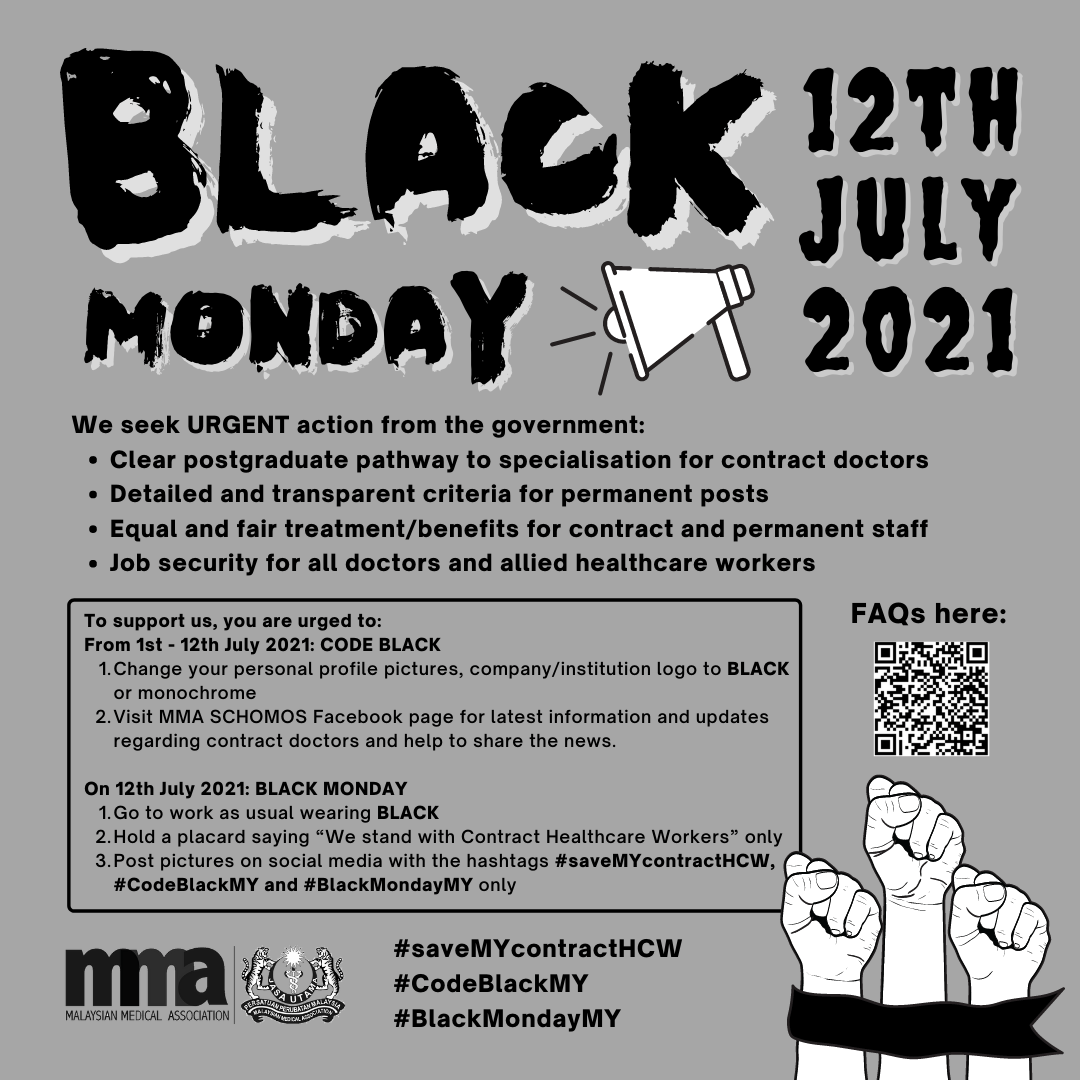 In phase 1, doctors nationwide are encouraged to change their social media profile photographs and corporate or institution logos dark or monochrome for 12 days as a show of support for contract doctors. Meantime, in phase 2, it has been proclaimed as “Black Monday,” and participants are encouraged to attend  work as usual while wearing black as its theme.

“Hold a sign that says solely ‘we stand with contract healthcare workers.’ Only use the hashtags #saveMYcontractHCW, #CodeBlackMY, and #BlackMondayMY on social media.”

How did the contract system begin:

The Malaysian Health Ministry (KKM) implemented a contract system in 2016 to place Malaysian medical, dental, and pharmacy graduates in housemanships at government hospitals across the country. Housemanships is essentially a two-year mandatory internship for doctors in Malaysia.

To obtain a degree in medicine, students must first finish a term of pre-clinical training in which they study medical theory before moving on to the second phase of clinical training, known as houseman-ship. After they complete their in-house training, they will qualify to register as medical officers (MO) under the Malaysian Medical Council (MMC).

“For the majority of us, we don’t have any other options to further our studies or receive scholarships to be a specialist. How long will these special privileges last, we have achieved independence for more than 60 years now?” the doctor questioned.

How the contract system being applied in the medical line?

First and foremost, I’m perplexed on why the Malaysian government created such a system while our country is experiencing a catastrophic shortage of healthcare workers in all sectors, with only about 3.4 clinical specialists per 10,000 people nationwide.

Those who are under contract, can continue their education to become a specialist but are required to take up a specialist programme on their own time with their own money, of course. This approach is thought to be harmful to contractual civil service doctors since it provides them with little to no job security and fewer opportunities to further their careers.

“Throughout my four years of service, I have never treated my patients based on their race and religion. But, this is what we have gotten from the government. Despite shedding blood, sweat and tears to curb the pandemic, it is indeed heart-wrenching to have racial discrimination debate amidst the pandemic,” said the doctor.

The Malaysian Medical Association (MMA) president, Prof Datuk Dr Subramaniam Muniandy raised objections to the minister’s statement, stating that racial or religious prejudices should never be used to appoint officers or determine whether they would serve in permanent positions.

According to sources, majority of their contracts have been extended until the end of 2022, but their future employment remains a question mark. Did you know, that it takes an average of 8-9 years to become a fully registered doctor, and more than 10 years to become a specialist ?

You may find the pathway of becoming a doctor in Malaysia below: 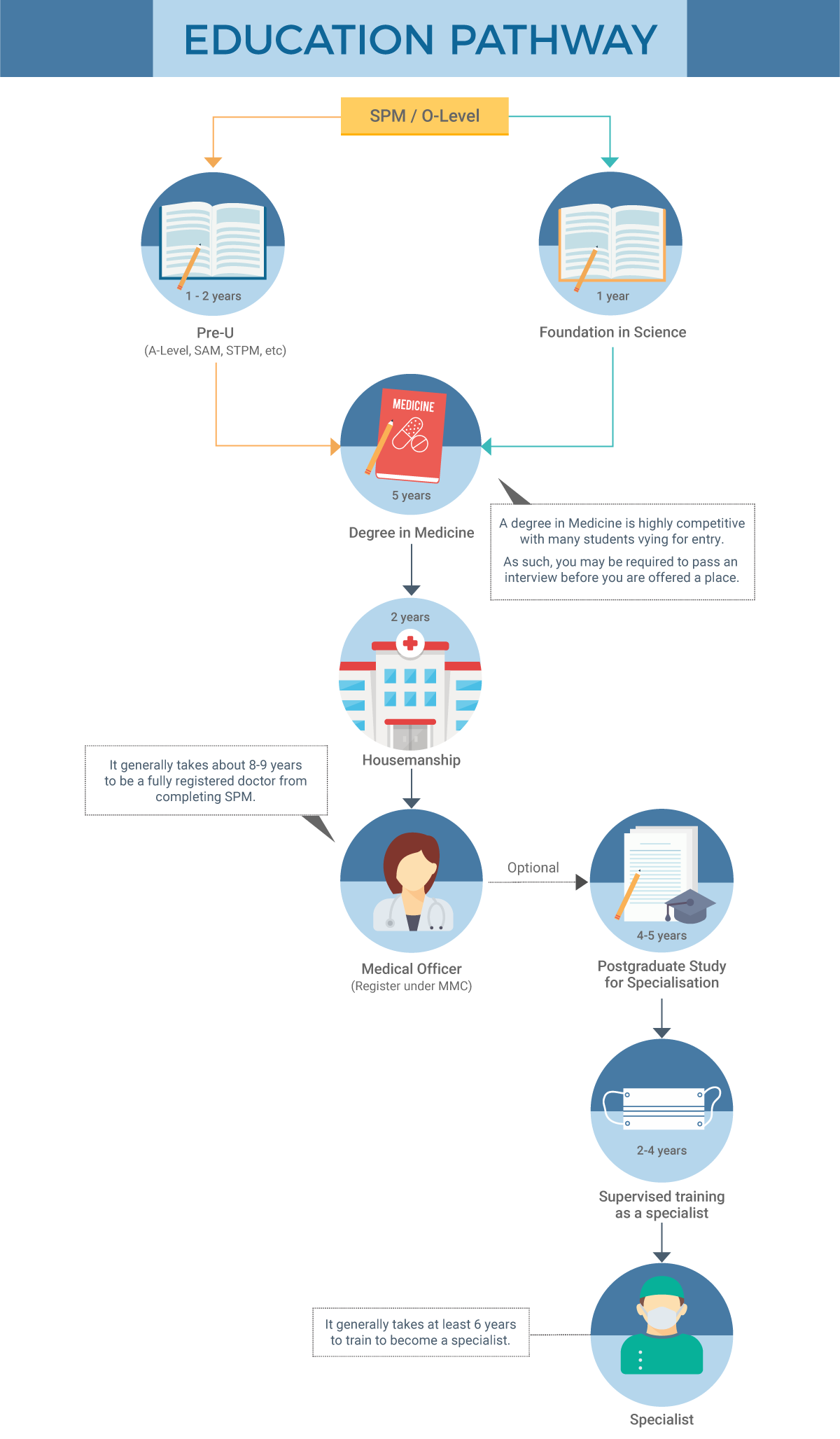 Knowing that our nation grapples with a public health crises, perhaps the value of healthcare frontline staff cannot be compromised, we recognise their vital responsibilities in saving lives and are eternally grateful for their efforts.

Medical professionalism has a profound impact in almost every aspect of the healthcare system. The contract doctors, on the other hand, have reached a stalemate and require great help and support of the Malaysian government by removing the contract system from the scheme, as the Health Ministry’s slogan Kami Sedia Membantu indicates that their tremendous contributions towards their fellow countrymen are priceless.