From his humble beginnings, the hair stylist has certainly come a long way. 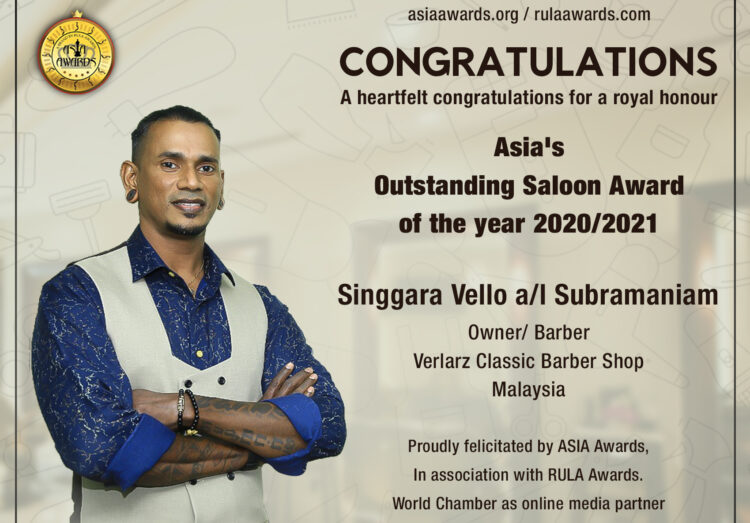 Being an entrepreneur comes with an array of blood, sweat and tears and one can only imagine the months or years of hustling to even make a big buck and at the same time build a profitable, thriving business. The road is an arduous one, but with a little determination, research, knowledge, and the will to achieve, nothing is impossible.

Singgara Vello, the owner of Verlarz Classic Barber has come a long way from his humble business inception by being honoured with Asia’s Outstanding Saloon Award of the Year 2020/2021 for his outstanding contributions to the business field.

If you’re not enthusiastic about what you do, you’re not going to have the incentive to keep going when you’re stressed and tired.

Born and bred in Bukit Mertajam, Penang, Vello came from an average family where his parents never failed to provide the basic amenities which were required while growing up. Yet, for some inexplicable reason, many folks still believe that in order to start your own business, you need a degree in marketing and an MBA.

But, Vello proves that you don’t have to be a degree holder to be successful. He took a job as a lorry driver in 1999 after completing his early education. He grew weary of his lorry driving job as time went on, due to long hours of work, minimal income, and the time which he spent with his family was too little.

Despite his hectic work schedule on managing both his saloon and his company, Vello has been actively involved in charitable activities.  He officially launched HANA, a non-governmental organisation (NGO) that operates throughout Malaysia, with its headquarters in Penang. As the Chairman of the NGO, he was engaged in assisting those who were jobless, homeless, and those who were less fortunate. The team has previously aided a large number of individuals by donating food, groceries, milk powder, and cash to those in need, especially during the outbreak.

Vello has a number of ideas to expand his saloon to the next level, including opening a Saloon Academy to train more students and provide job opportunities for most of them.

The ASIA Awards, powered by RULA Awards, has become a global benchmark for corporate excellence. Today, no other Business Award receives the same level of recognition and adoration from peers as the ASIA Awards does. The primary objective of this award ceremony is to foster a competition to raise overall performance standards and recognise the accomplishments of the best-performing companies.

Many people rejoice over huge victories (when the needle actually moves), but what about minor victories?

Make a list of minor victories to celebrate in your short-term goal. Small successes may boost your spirit and give you a jolt of energy. Even if your achievements aren’t earth-shattering, the experiences helps you acknowledge them.